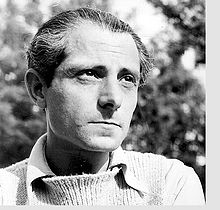 Manès Sperber (12 December 1905 in Zabłotów near Kolomea, Austrian Galicia (today Zabolotiv, Ukraine), 5 February 1984 in Paris) was an Austrian-French novelist, essayist and psychologist. He also wrote under the pseudonyms Jan Heger and N.A. Menlos.

Sperber grew up in the shtetl of Zabłotów in a Hasidic family. In the summer of 1916 the family fled from war to Vienna, where Sperber, who, having lost faith, at 13 had refused to do his bar mitzvah, joined the Jewish Hashomer Hatzair youth movement. There he met Alfred Adler, the founder of individual psychology, and became a student and co-worker. Adler broke with him in 1932 because of differences in opinion about the connection of individual psychology and marxism.

In 1927 Sperber had moved to Berlin and joined the Communist party. He lectured at the Berliner Gesellschaft für Individualpsychologie, an institute for individual psychology in Berlin. After Hitler had taken power Sperber was taken to jail, but was released after a few weeks on the grounds that he was, at that time, a Polish citizen. He emigrated first to Yugoslavia and then in 1934 to Paris where he worked for the communist internationale with Willi Münzenberg. In 1938 he left the party because of the stalinist cleansing within the party. In his writing he started to deal with totalitarianism and the role of the individual within society (Zur Analyse der Tyrannis).

In 1939 Sperber voluteered for the French army. After the defeat, he took refuge in Cagnes, in the so-called "zone libre" (free zone) of France, and had to flee with his family to Switzerland in 1942, when the deportation of Jews started in that zone too. After the end of the war, in 1945, he returned to Paris, and worked as a writer and as a senior editor at the Calmann-Lévy publishing house.

Manès Sperber is the author of a novel trilogy: Like a Tear in the Ocean: A Trilogy, (1949–1955), of an autobiographical trilogy: All our Yesterdays (1974–1997), and numerous essays on philosophy, politics, literature, and psychology.

Manès Sperber is the father of Italian historian Vladimir Sperber and French anthropologist and cognitive scientist Dan Sperber. His first wife, Miriam Sperber, eventually emigrated to Champaign, Illinois, and became a counselor at the Psychological and Counseling Center there. His brother Milo was an actor, and spent the last years of his life traveling around Britain reading from his brother's works.

Manès Sperber was buried in the Montparnasse cemetery in Paris, France.