Scouting in Maryland has a long history, from the 1910s to the present day, serving millions of youth with activities that have adapted to the changing cultural environment but have always been rooted in an active outdoor program.

The 1923 National Order of the Arrow Lodge Meeting was held at Baltimore, Maryland.

In the early 1920s, there were several camps named Rodney in the Delmarva area. However, the current Rodney Scout Reservation was established in 1921.

1. Camp Linstead opened in 1918 and operated thru 1944. Linstead is the Baltimore Area Councils first Camp. Documentation shows that the camp operated as a full time summer camp thru 1944. There is some speculation that it may have operated in 1945 as well, but for now there is not enough documented evidence to support this contention. 2. Linstead was located on the Severn River on Round Bay in Anne Arundel County and consisted of ninety acres and was part of the Riggs estate. 3. The property was leased from two brothers, F.G. and H.G. Riggs for $1.00 dollar per year. Upon their deaths in the late 1930s and early 1940s the property was transferred to their heir who sold it to developers. Due to the outbreak of WWII, construction of new homes was delayed until around 1945. 4. Nentico Lodge 12 was founded at Camp Linstead on June 30, 1922. Dr. E. Urner Goodman, the founder of the Order of the Arrow and later the founder of the Cub Scout program, served as Chief of the Fire in the formation of Nentico Lodge. 5. In October 1923 Camp Linstead was the site of the third Grand Lodge Meeting of the Order of the Arrow. The Grand Lodge meeting is the forerunner of today’s National Order of the Arrow Conference (NOAC). 6. Camp Linstead operated for both white and black Scouts alike thru separate camping periods. This was not always the case in other scout councils, particularly in the south. In some cases, summer camp facilities would not be made available at all for minority scouts or a separate but not nearly as equal camp would be provided. The fact that the Baltimore Scouting program demonstrated leadership in the early years of scouting to serve all youth is a testimony to their character and vision. 7. Camping periods were two weeks long, with one period being dedicated to serve black Scouts. The summer camping season lasted eight weeks, with four camping periods per season. The Camp week started on Monday with dinner and closed two weeks later at Monday breakfast. 8. Scouts camped in a large canvas and wood framed tent that housed eight boys and one adult leader. For sleeping there were double-decked spring cots with straw mattresses. 9. Most Units and Boys would travel to the camp by means of the Baltimore & Annapolis R.R. from Camden Yards in Baltimore and arrive at Boone Station, now known as Severna Park Station. From there, a Camp truck would transport their gear / footlockers and the Scouts would hike one mile into the camp. 10. During the war years, (1942, 1943 & 1944), Scouts were directed in the camping brochure to bring their War Ration books #3 or #4 to camp for food supplies. 11. Linstead provided, as it was the custom in the early years of Scouting, full health care services to scouts. A camp Doctor was available at all times and the Scouts would travel across the Severn River by boat to visit a barber and Dentist in Annapolis during their stay at camp. 12. Full scouting skills programs were provided at Linstead, but its main focus was on aquatics. One of the highlights for scouts during their stay at camp was their sail boat races against the Midshipmen of the Naval Academy out on the Severn.

There are six Boy Scouts of America local councils in Maryland, all within the Northeast Region.

In February 2009, the Star-Spangled Banner Flag or the Great Garrison Flag (also known as the 15 Star Flag) was officially adopted as the Official U.S. Flag of the Baltimore Area Council, Boy Scouts of America by authority of the Council Executive Board. A public ceremony was conducted on February 8, 2009, on the occasion of the 99th Anniversary of the incorporation of the Boy Scouts of America in Washington, D.C., by William D. Boyce, a Chicago publisher. Representatives of Scout Units, Districts, the Council and the public were on hand to commemorate the adoption at the Shapiro Scout Service Center. This was done in anticipation of the bicentennial commemoration at Fort McHenry in 2014 of the battle which inspired Francis Scott Key to write his inspirational poem which later became our national anthem, The Star-Spangled Banner.

Baltimore Area Council operates a Scout camp in Harford County, Maryland known as Broad Creek Memorial Scout Reservation. Broad Creek land was first acquired in 1946. Over 1,900 acres (7.7 km2) of land are owned and/or operated by BAC. It has operated as a Scout camp since 1948 and is one of the five largest blocks of contiguous forest in the traditional (western shore) Baltimore metropolitan area, and the largest such private forested area. In 2009, a new Rosenberg Welcome Center, formerly the Reservation HQ, and the expansion of the Dining Hall Pavilion at Camp Oest were constructed to accommodate attendance growth and goals in the 2008-2012 Baltimore Area Council Strategic Plan.

Broad Creek has three primary camps, two secondary camps, plus a large natural area including the largest hemlock forest east of the mountains in Maryland. Several pine plantations were planted in 1949-51 and felled in 2006-7 due to beetle infestations.

Of the secondary camps, Camp Cone's remote Houck Lodge is often used by non-scout groups and for training events and, along with Camp Finney, the forests are used for hiking, backpack camping, and orienteering, with paddling access to both the mile-long Lake Straus waters and to the huge Conowingo Reservoir (Susquehanna River). All of the camps in BCMSR are named for a person with an early history of long service to the council.

The hemlocks stand includes the largest Eastern Hemlock in the state of Maryland (officially designated as of July 3, 2007.) A fund-raising campaign started in 2005 allows for ongoing treatment by volunteers of over 2,000 individual hemlock trees for protection against the invasive woolly adelgid hemlocks infestation.

The OA lodge, Nentico Lodge 12, rents a sizable section of forest from BAC for $1 a year for various uses including ceremonial grounds. A Broad Creek "Camporall" in the fall of 1979, just a few years after national and Maryland scout membership numbers peaked, attracted approximately 4000 participants, mostly to Camp Finney. A September 1998 50th anniversary celebration attracted approximately 2800 participants. Even winter weekends with no special district or council events have attracted up to 1700 campers at this busy year-round facility.

Del-Mar-Va Council serves Scouts in Delaware and the eastern shore portions (east of the Chesapeake Bay) of Maryland and Virginia.

Rodney Scout Reservation, also known as Camp Rodney or simply RSR, is a Boy Scout camp located near North East, Maryland. Along with Henson Scout Reservation, it is one of the two main Scout camps in the Del-Mar-Va Council. Covering 900 acres (3.6 km2) including the Bull Mountain Wilderness Area, it shares a long border with the woodlands of Elk Neck State Park. Along with Broad Creek Reservation, Rodney has placed much of its land into conservation easements for permanent legal protection from residential or commercial development. A number of facilities and campsites directly overlook the Chesapeake Bay which is used for an active aquatics program.

Main article: Scouting in the District of Columbia

The Chester County Council is a Boy Scouts of America council that serves Chester County, Pennsylvania and part of Cecil County, Maryland in that state's northeast corner. It is one of the oldest councils in the nation. Its Horseshore Scout Reservation straddles the Mason-Dixon line between these two counties.

The Order of the Arrow lodge for the Mason-Dixon Council is Guneukitschik Lodge No. 317.

The Mason Dixon Council is made up of three districts:

Girl Scouts of the USA 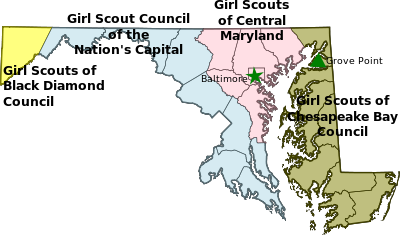 Four Girl Scout Councils serve Maryland but only one is headquartered in the state.

The only council with headquarters in Maryland, it serves over 30,000 girls in Baltimore City, Anne Arundel, Baltimore, Carroll, Harford and Howard Counties.

It originated the Girl Scouts Beyond Bars program that tries to maintain ties between female prisoners and their daughters by having them participate in Girl Scouts.[2] The program has been replicated in some 25 other Girl Scout Councils.

An international Polish Scout Jamboree with several thousand participants took place in Maryland in the summer of 2006, composed primarily of Scouts-in-Exile from Canada and the United States. It was held at Baltimore Area Council's camp at Broad Creek Scout Reservation in an area known as Camp Spencer.