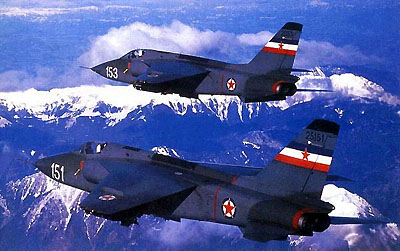 The Soko J-22 Orao ("Eagle") is a twin-engined, subsonic, close support, ground attack and tactical reconnaissance aircraft, with secondary capability as low level interceptor. It was built as a single-seat main attack version or as a combat capable two-seat version for advanced flying and weapon training. It was developed as a joint Yugoslav-Romanian project in the 1970s for the air forces of both nations, building it in Yugoslavia, and as the in Romania.

.On , the governments of Romania and Yugoslavia signed an agreement for the formation of YuRom, a joint venture. The program was headed by Dipl. Dr. Engineer Teodor Zanfirescu of Romania and Colonel Vidoje Knezević of Yugoslavia. The aircraft was intended as a replacement for the lightly armed ("Hawk") and the Republic , then in the JNA arsenal.

The requirements called for a light aircraft to be built on a simple structure, using locally produced equipment and avionics (but compatible with western components), tough (able to operate on grass or damaged runways), easy to maintain and reliable. The aircraft was of conventional twin-engine, high mounted wing monoplane configuration with all flying surfaces swept. The designers originally planned a single-engined supersonic aircraft, but Britain would not authorize the license for the engine the designers wanted (due to Romania being in the Warsaw Pact), so the less-powerful Rolls-Royce Viper was chosen as the powerplant, as Soko had experience with license-building this engine. It was originally intended that an afterburner would be developed for the Viper engines, but there were prolonged difficulties with this project, meaning that none of the pre-production aircraft featured it, and neither did early production examples. During the 1980s, both countries developed slightly different versions to take advantage of the after burning engines that had since become available.

The Yugoslav prototype 25002 made its first flight on November 1976 from near , with Major Vladislav Slavujević at the controls.

The third aircraft, numbered 003, a pre-production two-seater version, made its first flight on , but was lost almost a year later due to tail flutter problems. However, construction continued, and the first batches of pre-production machines were delivered in 1978 to the Air Force Aircraft Testing Facility in Belgrade, with serial production being set-up in Mostar, .

On , Orao 25101 piloted by test pilot Marjan Jelen broke the in a shallow dive over , becoming the first Yugoslav-designed aircraft to exceed Mach 1. The aircraft, however, is incapable of breaking the sound barrier in level flight, so it is classified as subsonic.

At the beginning of the Yugoslav wars, in , J-22s flew over in a show of force, but did not drop any bombs. The first offensive action by the J-22 was in 1991 when the Yugoslav National Army used them to strike targets in . They were used in attacks on arms dealers which were smuggling weapons into Croatia. During the first year of war only three J-22's were shot down, NJ-22 No.25508 flown by Muse Begić who ejected safely and J-22 No.2512? flown by Z.Tomić () from 238th After the withdrawal of the from Slovenia, 82nd Aviation Brigade was relocated from Cerklje to Zalužani air base. In 1992 when the started, the JNA left one squadron of J-22's to . That squadron was the 238th nicknamed the "Risovi Vrbasa" (Vrbas Lynxes). Those aircraft were used in few combat operations at the beginning of war.

In 1999, Yugoslav J-22s saw limited combat against the KLA flying 20 combat missions at treetop level with no air-to-air losses to NATO aircraft. However, one J-22 was lost in an accident, hitting a hillside in Kosovo. In addition, eleven aircraft were destroyed on the ground, most at Ponikve airbase when a NATO air strike hit one hangar with six J-22 and two aircraft which have remained buried.

;IJ-22 Orao 1:This designation is applied to the 15 Yugoslav-built pre-production aircraft (including a few completed to INJ-22A Orao two seat standard) with the non-afterburning powerplant and used for the tactical reconnaissance role with a centerline pod carrying optical and/or IR sensors. In other respects, the IJ-22A Orao 1 differs from the J-22B Orao 2 in details such as its powerplant of two Viper Mk 632-41R turbojets each rated at 17.79 kN dry and supplied with fuel from an internal weight of 2,360 kg, length of 14.90 m including probe for single seat model or 15.38 m including probe for two-seat model, wheel base of 5.40 m for single-seat model or 5.88 m for two-seat model, empty equipped weight of 5,755 kg, normal takeoff weight of 8,500 kg with reconnaissance pod, maximum take-off weight of 9500, maximum level speed ‘clean’ of 1,033 km/h at 8,000 m and 1,050 km/h at sea level, maximum rate of climb at sea level of 2,280 m per minute, climb to 6000 m in 3 minutes 12 seconds, and service ceiling of 13,500 m.;J-22A Orao 1:This is the Yugoslav variant equivalent to the IAR-93A with a non-afterburning powerplant of two Orao/Turbomecanica (Rolls-Royce/Bristol Siddeley) Viper Mk 632-41R turbojets each rated at 17.79 kN dry, but the larger and more diverse weapons load of the J-22B carried on that variant’s higher-rated hardpoints. The variant first flew in October 1983 and was built only in single-seat form.;J-22B Orao 2:This is the Yugoslav variant equivalent to the IAR-93B with an afterburning powerplant, integral wing tankage, the greater weapons load and diversity of the J-22A Orao 1, and Thomson-CSF HUD. The variant is being built only in single-seat form, and J-22A/B production will total 165 aircraft. Yugoslavia planned a major upgrade of its J-22 Oraos with a radar and a computer nav/attack system integrated via a MIL 1553B digital database, but the dissolution of Yugoslavia and the civil war of the early 1990s made this an unlikely happenstance.;NJ-22 Orao:This is the dedicated two- seat reconnaissance variant operated by the Yugoslav Air Force with provision for a reconnaissance pod (with optical and IR sensors) carried on the centerline hardpoint. The type first flew in July 1986, and 35 were delivered in NJ-22A Orao 1 and NJ-22B Orao 2 forms with non-afterburning and afterburning powerplants respectively.

;SRB
* - Currently operates 32 J-22's;flag|Republic of Srpska
* The Bosnian Serb Air force operated 7 J-22's aircraft until it was integrated into the . Aircraft are no longer in use.;YUG/flagicon|FR YugoslaviaYugoslavia
* /FRY Yugoslav Air Force

Most produced J-22 aircraft were withdrawn from use and 16 of them are currently owned by aviation museums [ [http://www.aeroflight.co.uk/waf/yugo/af2/types/soko_j22.htm "Serbia Air Force" entry at World Air Forces website] ] .