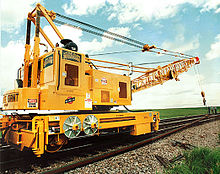 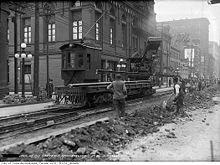 A railroad crane, (crane car or wrecker (US) or breakdown crane (UK)) is a type of crane used on a railroad for one of three primary uses: freight handling in goods yards, permanent way (PW) maintenance, and accident recovery work. Although the design differs according to the type of work, the basic configuration is similar in all cases: a rotating crane body is mounted on a sturdy chassis fitted with flanged wheels. The body supports the jib (UK) (boom (US)) and provides all the lifting and operating mechanisms; on larger cranes, an operator's cabin is usually provided. The chassis is fitted with buffing and coupling gear to allow the crane to be moved by a locomotive, although many are also self-propelled to allow limited movement about a work site.

For cranes with a jib that extends beyond the length of the chassis, a match wagon (also known as a 'jib carrier' (UK) or 'boom car' (US)) is provided to protect the jib and to allow the crane to be coupled within a train. The match wagon is usually a long, flat wagon that provides a means of securing the jib for transportation; storage areas for special equipment or supplies are usually fitted too. It was not uncommon for the match wagon to be built on a withdrawn revenue-earning wagon.

Railroad cranes are usually designed specifically for one of three purposes:

Usually the smallest of the railroad cranes, goods yard cranes were used in the larger goods yards to provide lifting capability in areas away from the ground-mounted goods cranes normally provided in such yards.

They were often small enough to be operated by hand, and were not normally self-propelled, instead requiring the use of a shunting engine to move them into position. Once cheap road-going mobile cranes were available, these superseded the rail-mounted variety due to their greater flexibility and mobility.

The most varied forms of crane are used for maintenance work. General purpose cranes may be used for installing signalling equipment or pointwork, for example, while more specialised types are used for track laying.

The largest cranes are used for accident recovery work, usually forming part of a breakdown train that includes staff accommodation and recovery equipment. These are large enough to lift derailed rolling stock back onto the track, although two or more cranes may be required to safely recover a locomotive. In US terminology, a 'breakdown crane' is often referred to as a 'wrecker'.

A railroad crane generally resembles a conventional fixed-location crane except that the platform the crane sits on is a heavy-duty reinforced flat car. Directly underneath the center of gravity for the crane is a pivot point that allows the crane to swivel around 360°; in this way the crane can locate its boom over the worksite no matter what its location is along the track. The trucks on the car under the crane will often include traction motors so that the crane is able to move itself along the track, and possibly tow additional cars.

Larger cranes may be provided with outriggers to provide additional stability when lifting. Sleepers are often carried on the match car to put under the outriggers to spread the weight applied to the trackbed.

Breakdown cranes (sometimes called wrecking cranes or 'big hooks'[1]) were necessary to every railroad to recover derailed rolling stock and engines; while also assisting with bridge building and yard construction.

In the early days of the railways, locomotives and rolling stock were small enough to be re-railed manually using jacks and tackle, but as they became bigger and heavier this method became inadequate.

Enter into this the steam crane and cable winch. Appearing about 1890, the cranes increased in size, commensurate with the rise of steel Pullman cars, so by 1910 cranes reached their peak of development. Many of these 1910-era cranes were so useful and powerful, that they remained in service until the 1980s. The combination of a quick-firing steam boiler, heavy steam winch, and cable hook could little be improved upon, and thus remained in service. Also, steam engines did not mind being parked for months, with a little care, and were ready to go to work when needed.

In the 1980s big, hydraulic controlled diesel cranes appeared. Also, these cranes had the ability to travel on the highway so as to better able to get to the scene of an accident. They are much more mobile, and are able to manoeuvre around an accident scene, better than a crane only limited to rail access.

In the 1990s a new generation of railway cranes was developed. While the conventional diesel hydraulic road cranes were adopted with some small trolleys to move on the rail track, the new generation had a professional high speed railway chassis for up to 75 mph. The superstructure is also diesel hydraulic with telescopic boom and counterweight and designed to the railway's specific needs. These cranes can travel with suspended loads and keep levelled even on an elevated track, due to the automatic cant compensation. It is possible to work on one outrigger only, work with boom in horizontal position under bridges or under the overhead wires. Capacities are as high as 200 m/t (metric). It makes this new generation useful for maintenance work and switch and crossing renewal, as well as recovery work. 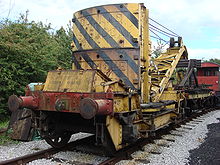 An LMS 10ton Hand Crane made by Cowans Sheldon

Most heritage railways in the UK have one or more preserved railway cranes, either just as historic exhibits, or as fully functioning examples assisting with the operation of the railway. Although not normally required for re-railing activities, they are exceptionally useful for track relaying and the restoration of locomotives and rolling stock, and help to avoid expenditure on outside contractors.