Military of the Falkland Islands

Military of the Falkland Islands

The maintenance of only a token military force before the Falklands War, and the suggestion that HMS Endurance was to be withdrawn, persuaded Argentina to start that conflict, assuming that Britain would not respond or be easily able to recapture the islands.[4] Following the reclamation of the territory in 1982, the UK invested heavily in the defence of the islands, the centrepiece of which is the new airfield at RAF Mount Pleasant, 27 miles (43 km) west of Stanley.[5] The base was opened in 1985, and became fully operational in 1986.[6]

The Falkland Islands maintains its own part-time volunteer force, the Falkland Islands Defence Force (FIDF), previously known as the Falkland Islands Volunteer Corps. Although this unit existed in 1982 as a reinforcement for the Governor's detachment of Royal Marines, it did not play any part in the main conflict during the war of 1982, its members having spent the duration of the hostilities under house arrest by the Argentines after their surrender on Argentine capture of the islands.[7][8][9] 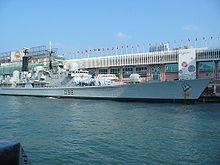 RAF Mount Pleasant has its own port facility[10] called Mare Harbour, and the Royal Navy maintains a presence in the area with a frigate or guided missile destroyer accompanied by an RFA vessel in the South Atlantic and a patrol ship permanently close to the islands.[citation needed] In addition, an Ice Patrol Ship, HMS Endurance, is on station close to Antarctica for six months of the year; that ship is to be replaced by a new icebreaker, HMS Protector.[11].

The warship and RFA vessel carry out the Atlantic Patrol Task (South) mission which "provides a maritime presence to protect the UK's interests in the region". The Type 42 destroyer HMS Edinburgh took over the South Atlantic Patrol Task in October 2006,[12] replacing HMS Southampton. Prior to Southampton's deployment in August 2005 the role was filled by HMS Cardiff, which was decommissioned on return to the UK. As of February 2010, the on-station warship was the Type 42 destroyer HMS York. In late April 2010, HMS York was relieved by the Type 23 frigate HMS Portland. In August 2010, HMS Portland was relieved by the Type 42 destroyer HMS Gloucester. On 21 April 2011, HMS York arrived at the East Cove Military Port in the Falkland Islands, beginning patrol duties for the islands.[13] October 2011 saw the arrival of Type 23 frigate HMS Montrose, generating a statement from UNASUR (Union of South American Nations).

The Falkland Islands Patrol ship is a River class patrol vessel, which replaced the previous Castle class patrol vessel. In 2007 HMS Clyde relieved HMS Dumbarton Castle and HMS Leeds Castle. It is planned that she will stay permanently in the South Atlantic until 2012.[citation needed]

The Royal Navy also has Trafalgar and Astute class nuclear submarines that it can deploy to the area, though such deployments are classified. The threat from submarines to hostile ships was demonstrated during the Falklands War when HMS Conqueror sank the Argentine cruiser ARA General Belgrano. The Royal Navy's submarines also carry BGM-109 Tomahawk cruise missiles which have a range of 1,500 miles (2,400 km) and can strike at targets within an enemy country. The Sun newspaper has speculated that a Swiftsure class attack submarine, HMS Sceptre, was sent to the islands in March 2010.[14]

The British Army maintains a small garrison on the Falkland Islands based at Mount Pleasant. The total deployment is about 500 personnel made up of a roulement infantry company, an engineer squadron, a signals unit (part of the Joint Communications Unit - see below), a logistics group and supporting services.[15][16][17]

As of September 2011[update] infantry units are provided primarily from the Princess of Wales' Royal Regiment. [18]

RAF Mount Pleasant, built following the surrender of Argentine invasion forces, is capable of accepting trans-Atlantic aircraft such as the Lockheed TriStar. The TriStar was purchased mainly for the UK-Falklands route, until their entry into service of leased 747s and 767s.[20]

Four Eurofighter Typhoon aircraft provide air defence for the islands and surrounding territories and have a secondary ground attack role.

The VC10 provides air transport and aerial refuelling for the fighters. When a fighter is launched it is almost immediately followed by the VC10 as changeable weather conditions might make diversion to another airfield necessary. The Hercules provides resupply missions through the use of air-drops and also carries out maritime patrol. The latter is an important mission to the Falkland Islands government as the Hercules verifies that all fishing vessels are licensed; at £1,000 per licence per season this is an extremely lucrative source of income.

The helicopters of No. 1564 Flight (formerly No. 78 Squadron) provide air transport missions. The Sea Kings carry out short and medium range search and rescue missions. The sole remaining Chinook was returned to the UK in October 2006 to be redeployed to Afghanistan.

The Joint Communications Unit Falkland Islands (JCUFI) provides the electronic warfare and command and control systems for the Royal Navy, Army and RAF stationed there. It incorporates the Army's signals unit and RAF personnel.[21]

Joint Service Explosive Ordnance Disposal in the Falkland Islands consists of 33 Engineer Regiment (EOD), RAF and RLC EOD teams. It is mainly based in Stanley but there is also a detachment at Mount Pleasant. The groups operates the Joint Service Explosive Ordnance Disposal Operations Center. The group destroys munitions from the Falklands War that did not explode at the time and briefs troops, tourists and citizens on the areas which are safe and the minefield marking which have been put in place.[19][22]

The UK maintains a Joint Rapid Reaction Force containing elements of all three services which could be deployed to the islands in the event of receiving intelligence of a specific threat to the islands.