Bug Bite (sometime spelled "Bugbite") is the name of a in the GoBots and various . The Gobot version was first issued in 1984 (named as [http://www.toyarchive.com/Gobots/SuperGobots/BugBiteBoxed1a.jpg"Bug Bite"] ; the first use of the name on a Transformer officially came in 2007, though the name was planned for use on a 2004 figure.

Challenge of the Gobots 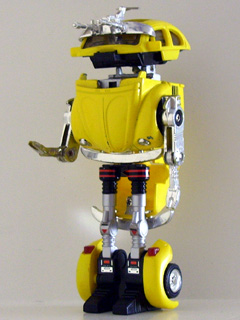 Bug Bite is a brilliant yet amoral scientist. He originally belonged to another dimension, specifically a robotic world which was, similarly to Cybertron, consumed by an endless civil war. This war was stopped only when the fate of not only their planet, but their entire universe was threatened by an extradimensional influence. Under the strict supervision of the Guardian Treds, Bug Bite was enlisted to an allied team and sent into the dimension which threatened their own. Bug Bite took a new body and infiltrated the ranks of the Decepticons, hoping to not only discover the source of his home universe's plight, but take calculated revenge. [ [http://transformers.wikia.com/wiki/Bug_Bite Bug Bite - Teletraan I: The Transformers Wiki ] ]

Despite being an early release in the Gobots toyline, Bug Bite had to wait until a later episode, "The Gobots That Time Forgot", to make his debut in the "" cartoon. Here he featured as the second-in-command to , Renegade ruler of a society of Gobots who live inside Gobotron. They believe themselves to be the planet's only inhabitants, and the two Renegades possess scramblers that give them control of the other Gobots in the underground world. However, when Scooter accidentally discovers the world, Gunnyr and Bug Bite are toppled by the Guardians.

In Transformers: Timelines volume 2 #2, "Games of Deception", travelling to Earth with a group of Bludgeon's Decepticons (unaware they were being trailed by ' forces), they met up with 's second-in-command . Capturing Mirage, Bug Bite then had Starscream, and Ramjet implanted and controlled with cerebro shells. Travelling to meet Megatron, Bug Bite had the Decepticon leader and his troops likewise implated with cerebro shells, revealing his plan: he had travelled to Megatron's dimension to take revenge on the Transformers for inadvertently causing so much damage to his home dimension. Unfortunately for him Megatron was more resistant to the effects of the shell than Bug Bite had thought. At that point Magnus' forces arrived, seeking to recue Mirage, and disabled the cerebro shells. In the ensuing three-way battle, Bug Bite tried to reach the gun of the fallen Dirge, only to have his head blown off by a point-blank blast from Megatron.

*Gobot Bug Bite:A Super size Gobot toy. The figure was originally issued in Japan as part of the "" Scale Robo DX size, based on real-life vehicles. It was released in Japan in 1983, then America and Europe in 1984. In 1993, it was reissued as part of 's short-lived "" line, under the designation "De Luxe Beetle".

*Generation 1 Bug Bite:A white redeco of reissue Bumblebee. While the name of the figure was announced in pre-release promotional material, the final toy was unnamed for legal reasons.

*Timelines Bug Bite (2007):Bug Bite is part of the Classics-themed BotCon 2007 box set, along with Dirge, Dreadwind, Thrust and Thundercracker. Bug Bite is a white and black redeco of the Classics Bumblebee toy, transforming into a sports coup of indeterminate model. He tows a small trailer with his "Tidal Wave" drone-unit on the back, which converts into a jet-pack to give him "flight" in robot mode. As with most Classics toys, he features a heat-sensitive rubsign. :There were 1500 Classics Bug Bite figures produced. [ [http://www.seibertron.com/database/character.php?view=hasbro&char_id=3690 Bugbite (Decepticon Deluxe Vehicles, Convention & Club Exclusives) ] ] :Bug Bite is a redeco of Classics Bumblebee and Cliffjumper. [ [http://tformers.com/Review-Transformers-Timelines-Bugbite/8024/news.html Review - Transformers Timelines Bugbite - Transformers Toys News Reviews - TFormers.com ] ]