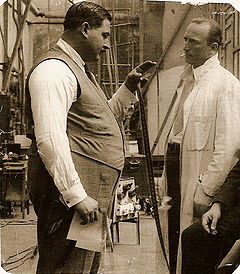 Born in Glen Ridge, New Jersey[1], his father was Count Leopold Philipp von Kolowrat-Krakowsky and his mother was Nadine Freiin von Huppmann-Valbella, the daughter of a cigarette manufacturer from Saint Petersburg in Russia. He had three siblings: Bertha, Friedrich and Heinrich.

The reason "Sascha" Kolowrat-Krakowsky was born in the US is described in a letter of March 30, 1984 from his nephew Count Colloredo-Mansfeld to the Austrian film scholar Walter Fritz:

He studied at the Catholic University of Leuven (present-day Katholieke Universiteit Leuven) in Belgium where he became member of the German Catholic fraternity Katholische Academische Verbindung Lovania Leuven. He served in the army and was able to speak many European languages. After he had met Charles Pathé in Paris in 1909, he got into cinematography, besides his interests in motorcycle and car racing, aviation and ballooning. In 1909, he privately filmed a car racing at the Semmering Pass.

After the death of his father in 1910 and the inheritance of his estates in Bohemia, Alexander Kolowrat founded the Sascha-Film factory and a film laboratory at his castle Groß Meierhöfen (today Velké Dvorce) in Pfraumberg (Přimda). In 1912, he moved to Vienna and founded the Sascha-Filmfabrik on Pappenheimgasse 2/Treustraße in Brigittenau. One of his first productions with Sascha-Film was the documentary Die Gewinnung des Erzes am steirischen Erzberg in Eisenerz ("The Ore Mining in the Styrian Erzberg in Eisenerz"). In 1915, he took over the film branch of the k.u.k. Kriegspressequartier (War Media Quarters) in Vienna and also produced several propaganda movies during World War I.

Kolowrat-Krakowsky discovered many actors, e.g. Marlene Dietrich and Willi Forst, who both performed in the 1927 silent film Café Elektric directed by Gustav Ucicky. He did important pioneering work in all film genres of the time. The high points of his artistic work were the productions of monumental silent movies like Sodom and Gomorrah (1922) or Die Sklavenkönigin (1924), both directed by Michael Curtiz, on the Laaer Berg in Vienna-Favoriten. In 1916, he erected Austria's first huge studio in Vienna-Sievering. Together with his Sascha-Film company, he was the owner of several cinemas. He personally loved to attend the Münstedt Cinema in the Prater park, as well as the Burgkino and the Opernkino. In the Vienna Prater, west of the Rotunde, he erected "Old London" in 1920 for film shots, similar to the "Venice in Vienna" theme park nearby, but smaller.

The count owned a large city palace on Wenceslas Square in Prague. An enthusiastic mobilist he financed the development of a lightweight sports car ("Sascha-Wagen") designed by the Austro-Daimler engineer Ferdinand Porsche, which ran at the 1922 Targa Florio with Alfred Neubauer at the wheel.