The International MaxxPro MRAP is an armored fighting vehicle designed by American company Navistar International's subsidiary Navistar Defense along with the Israeli Plasan Sasa, who designed and manufactures the vehicle's armor.[4] The vehicle was designed to take part in the US Military's Mine Resistant Ambush Protected vehicle program, led by the US Marine Corps, as well as a similar Army-led program, the Medium Mine Protected Vehicle.[5]

MRAPs are categorized as category 1 or category 2, depending on usage and passenger compartment space, and Navistar produces the MaxxPro in both sizes, although the vast majority of those sold have been category 1 MRAPs. The MaxxPro Plus model comes with dual rear wheels for increased load carrying capacity, such as an ambulance or EFP protected variant. The latest model produced is the MaxxPro Dash, which is a smaller and lighter category 1 model. Both the Plus and Dash models use the MaxxForce 10 engine with 375 hp, in place of the DT 530 with 330 hp, used in the original base model produced.

The MaxxPro utilizes a crew capsule with a V-shaped hull, mounted on an International WorkStar 7000 chassis. The V-hull deflects the blast of a land mine or improvised explosive device (IED) away from the vehicle to protect its occupants. Because the chassis is mounted outside the armored crew capsule, there are concerns that it will likely be destroyed in the event of an ambush, leaving the soldiers inside stranded.[5] However, according to Navistar Defense spokesperson Roy Wiley, the MaxxPro "did extremely well during the tests, and we are extremely pleased." [6] This design may prove as effective as the Krauss-Maffei Wegmann ATF Dingo that uses a similar design, one which mounts an armored capsule to a Unimog chassis. This design has survived a 7 kg (15 lb) land mine blast with no injuries.[7]

According to Navistar Defense, the vehicle is designed with operational readiness in mind and utilizes standardized, easily available parts, to ensure rapid repair and maintenance.[8] The armored body is bolted together instead of welded, as in other MRAPs. This facilitates repair in the field and is a contributing factor to Navistar's greater production capacity for the MaxxPro.[9]

Initially just two vehicles were delivered for testing at the Aberdeen Proving Ground in March 2007.

Following testing, a first order for 1,200 MRAP Category 1 MaxxPro vehicles was placed by the US Marine Corps Systems Command on May 31, 2007 for delivery by February 2008.[10] However, as the U.S. Army Research and Development laboratory is overseeing the entire MRAP program, it is unclear which branches of the US Armed Services will be receiving the vehicles, and in what numbers.[6] The contract was worth over $623 million, making it then the biggest MRAP contract to date. The US Marine Corps plans to replace all HMMWVs "outside the wire" in Iraq with MRAP vehicles.[11][dead link]

In the first order of 2008, 743 Category I MaxxPros were ordered. The MaxxPro was by now the only Category I MRAP still receiving fresh orders.[16][dead link] 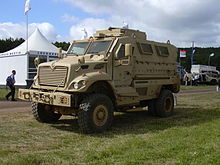 On June 16, 2008 Navistar debuted a new version called MaxxPro Plus. MaxxPro Plus has increased engine power and payload, as well as Frag Kit 6 enhancements for increased explosively formed penetrator protection.[17]

On September 4, 2008 the U.S. Marine Corps awarded Navistar a $752 million contract to develop and produce a lighter, smaller, and more mobile MaxxPro variant that is less prone to the rollover problems that have plagued MRAP vehicles. MaxxPro Dash has a smaller turning radius and higher torque to weight ratio. Production of the MaxxPro Dash will begin in October 2008 with delivery of 822 units to be completed by February 2009.[18][19]

There is also an MRAP Recovery Vehicle; 250 have been ordered. These are well suited to recovering other vehicles which have been damaged by IEDs.[20]