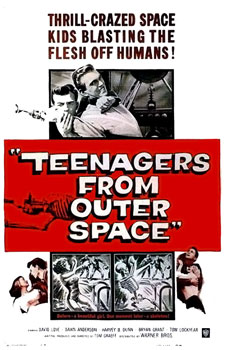 "Teenagers from Outer Space" is a 1959 science-fiction about an extraterrestrial ship landing on to use it as a for its supply. The crew of the ship includes several teenagers (who ironically look quite for teenagers), two of whom oppose each other in their activities. The independent film was originally distributed by Warner Brothers. It is perhaps best known for its use in the fourth season of "".

A team of gangly spacemen (or teens) arrive on Earth in a screw-shaped space ship. They have been searching the galaxy for a planet suitable to raise their herd of "gargons", a lobster-like (but air-breathing) creature which is a food staple on their homeworld. Thor (Bryan Pearson), the first spaceman to emerge, shows his contempt for other-worldly creatures by using his vaporization weapon on a little dog, Sparky, that happened to be at the wrong place at the wrong time. Derek (David Love), upon discovering an inscription upon Sparky's dog tag, voices his fear that the herd of gargon might destroy Earth's local inhabitants. The other spacemen scoff. As members of the "supreme race", they are disdainful of "foreign beings", no matter how intelligent, and pride themselves on the fact that families and friendships are forbidden on their world. Derek reveals himself to be a member of an underground which commemorates earlier, more humane periods of the homeworld's history.

The gargon seems unable to thrive in Earth's atmosphere. During this distraction, Derek flees, before the gargon revives and flourishes. When the Captain reports Derek's antics, he is connected to the Leader (Gene Sterling) himself. It turns out that Derek is the son of their Leader, though Derek is not aware of this. Thor is sent to retrieve Derek, with orders to kill if necessary to protect the mission. They return to their base, leaving the gargon behind, hoping to judge its growth rate by the time they return.

Meanwhile, Derek follows the address on the dog tag to a private home that belongs to Betty Morgan (Dawn Anderson) and her Grandpa Joe (Harvey B. Dunn). They have a room to rent, and Derek inadvertently becomes a boarder. When Betty's boyfriend, reporter Joe Rogers (Tom Graeff), can't make their afternoon plans, Derek goes along to visit Alice (Sonia Torgeson). He shows the tag to Betty who recognizes it immediately. Derek takes her to the place where the ship landed, and shows her Sparky's remains. She doesn't believe him, so he describes Thor's "focusing disintegrator ray" that strips flesh from bone. Betty takes this well, and vows to help Derek stop the bad guys.

During the course of the day Betty and Derek have more than one run in with Thor and his ray gun, and Joe grapples with news stories of skeletons popping up all over town, including in Alice's swimming pool. Eventually Thor is wounded, and when he kidnaps Betty and Derek in order to seek medical attention, he reveals Derek's true parentage. Two car chases and a gunfight ensue, and Thor is finally captured by authorities after plummeting off a cliff in a stolen car.

But there are bigger problems than Thor: the gargon has grown immensely, killing a policeman with whom Joe was investigating the landing site, and attacking numerous people. Derek and Betty immediately head out to the car wreck to look for the gun. Derek and Betty share a kiss, and he vows to make Earth his home and never leave. When the gargon ruins their romantic moment, Derek finds the gun just in time for them to escape. Unfortunately the gun has been damaged in the crash, and the monster is coming towards the town. They head out once again to confront it, using power lines to fuel the disintegrator. They kill the gargon, but it's too late: enemy ships have appeared overhead.

The whole gang, including Joe and Grandpa, hurry out to the landing site. Derek reunites with his father, and makes the ultimate sacrifice to save the Earth by leading the fleet directly into the hillside and causing a massive explosion. Derek does not survive, but is remembered to have said that he would "make the Earth my home, forever,".

"Teenagers from Outer Space" was filmed on location in and around , with a number of tell-tale landmarks like in and giving away the film's hazy locale. One notable aspect of the film is that it was largely the work of a single person, Tom Graeff (1929-1970), who, in addition to playing the role of reporter Joe Rogers, wrote, directed, edited, and produced the film, on which he also provided cinematography, special effects, and music coordination. Producers Bryan and ("Thor" and "Hilda") and Gene Sterling ("The Leader") provided the film's $14,000 budget, which was less than shoe-string by the standards of the time.

According to Bryan Pearson, the crew employed many guerrilla tactics in order to cut costs. Director Tom Graeff secured the location for Betty Morgan's house for free by posing as a student (while Graeff had attended the school, he had graduated 5 years earlier). The older woman who owned the house even let the crew use her electricity to power equipment.

Graeff shot in many nearby locations — mostly in the vicinity of and — to double as more important city landmarks. Graeff's steady hand and framing kept most of the real locations under-wraps, creating a great low-budget illusion of a small town.

Other cost-cutting ideas didn't pay off as well: the space costumes were simple flight suits clearly decorated with masking tape, dress shoes covered in socks, and surplus Air Force helmets. The use of stock footage in lieu of special effects and Spielbergian "looking" shots replacing actual visuals of the invading enemy spaceships seriously undercut the urgency of the ending. Props included a single bolted-joint skeleton re-used for every dead body, and the infamous dime-store Hubley's "Atomic Disintegrator" as the aliens' focusing disintegrator ray.

In an unusual practice of the era, Graeff also pre-recorded some of the film's dialogue for several scenes, and had the actors learn to synchronize their actions with the sound. The score of the film came from stock, composed by and . Incidentally the same stock score has been recycled in countless B-movies, such as "", "", and most notably "".

In June 1958, Bryan Pearson, who invested $5,000 in the production with his wife Ursula, took Graeff to court in order to gain back the original investment and a percentage of any profits. The Pearsons had learned that Graeff had allegedly sold the film (which was not true until early 1959), but heard nothing of their investment or the percentage of profits they were entitled to. The legal dispute dragged on for a year, and once it was settled (Pearson got his $5000 investment back but the judge ruled there was no profit for him to share in), Tom and the Pearsons, who had been good friends during the production of "Teenagers", never spoke to each other again.

The film opened on , 1959 to negative but not crippling reviews. The review of the movie stated "what a curious little film this is [...] there are flashes of astonishing sensitivity half buried in the mass of tritisms." And of the director, Tom Graeff, "when he stops spreading himself so incredibly thin, I think his work will bear watching."

The film failed to perform at the box office, placing further stress on an already-burdened Graeff, and in the fall of 1959, he suffered a breakdown, proclaimed himself the second coming of Christ.

* According to , over half the cast of "Teenagers from Outer Space" never appeared in any other film. Harvey B. Dunn, an actor seen in several productions from cult-film director , plays Betty's grandfather.

* Tom and Chuck lived in an apartment behind the house used as Betty Morgan's home.

* In 2005, the complete "Teenagers from Outer Space" was released as an unlockable bonus video on and game ""

* Derek is modeled after Klaatu in "The Day the Earth Stood Still", who also attempts to blend in with typical s American small town culture in order to warn humanity about an oncoming alien terror.

* The film had many different titles originally, including "The Boy from Out of This World" and "Killers from Outer Space". Warner Brothers decided that "Teenagers From Outer Space" would draw the best audience, though it was renamed "The Gargon Terror" for its release in the .

* The film was lampooned in June 1992 in episode 404 of the movie-mocking television series "".

* A scene from the film was used on the American version of the show "" in the game "Film Dub".

* Teenagers from Outer Space is in the public domain in the United States.

* band, , named one of their songs "Teenagers From Outer Space".

* 'Teenagers from Outer Space' has received numerous 'bargain bin' releases.
* The MST3K version of the film was released by Rhino Home Video as part of the 'Collection, Volume 6' box set.