AXA S.A. is a French global insurance group headquartered in the 8th arrondissement of Paris. AXA is a conglomerate of independently run businesses, operated according to the laws and regulations of many different countries. The AXA group of companies engage in life, health and other forms of insurance, as well as investment management. The group operates primarily in Western Europe, North America and the Asia Pacific region and the Middle East.

The AXA Group encompasses five operating business segments: Life & Savings, Property & Casualty, International Insurance (including reinsurance), Asset Management and Other Financial Services. It ranks as the 9th largest company in the world (based on revenue) on the 2010 Fortune Global 500 list.[2]

The company was originally founded in 1816 as Mutuelle de L'assurance contre L'incendie (the Ancienne Mutuelle).[3] It acquired Compagnie Parisienne de Garantie in 1978 and became Mutuelles Unies.[4] It went on to buy the Drouot Group in 1982, at which time it adopted the AXA name.[4] The takeover of The Equitable, a well-known American insurer, came in 1991.[4] It bought Union des Assurances De Paris (UAP), France's largest insurer, in 1996 becoming AXA-UAP for a while before reverting to the name AXA in 1999.[5] Then in February 1999 AXA acquired Guardian Royal Exchange.[6] In May 2000 AXA acquired all shares it did not already own in Sun Life & Provincial Holdings.[7] On 14 June 2006 AXA acquired the leading Swiss insurance company Winterthur Group from Credit Suisse for approximately €9 billion.[8]

Despite being written in upper case, "AXA" is not an acronym, but was chosen because its name can be pronounced easily by people who speak any language. After acquiring the Drouot Group in 1982, the company hired an outside consultant to conduct a computer-aided search for a new name. The selection criteria consisted of a short and snappy name to convey vitality, a name that begins with the letter A so that it would appear near the top of all lists, and something that could be pronounced easily in every language, consistent with the group's desire for an international presence. In 1985, Chairman and CEO Claude Bébéar chose the name AXA.[9]

AXA run its investment branch through AXA Investment Managers (IM) which is headed by John Cook.

AXA Sun Life was created following the merger between AXA Equity & Law and Sun Life Assurance Society PLC. In 2006 Winterthur Life in the UK was absorbed although AXA continue to use the Winterthur brand for high net worth wealth management business. The business units are:[10]

On the Isle of Man

AXA Canada offers insurance services through a network of affiliates operating in the different Canadian regions such as Quebec, Ontario, Western Canada and Atlantic Canada. In 2009, the company had a total of approximately 2,300 employees and 4000 brokers and advisors. The head office is in Montreal, Quebec.

On December 15 of 2006, AXA Advisors, LLC entered into agreements with LPL (Linsco Private Ledger), the country's largest independent broker-dealer. LPL agreed to provide brokerage, clearing and custody services on a fully disclosed basis. The terms of the agreements are five years, subject to additional 24-month extensions. Services are expected to begin in August 2007.

In July 2008, AXA acquired ING Insurance Mexico, they are offering essentially the same services that ING offered. The Chairman in Mexico is Xavier de Bellefon.

AXA Life Insurance operated in the Asia Pacific region as 'AXA Asia Pacific Holdings Ltd. (AXA APH) which is the former National Mutual Life Association of Australasia founded by actuary John Montgomery Templeton The AXA Collection and was listed on the Australian Securities Exchange. The head office of AXA APH was located in Melbourne, Australia, and there was a major regional office in Hong Kong. AMP acquired AXA Asia Pacific in 2011; it retained AXA APH's Australia and New Zealand operations, and sold the Asia operations to AXA.

AXA Asia - Based in Hong Kong, the AXA Asia Regional Office is responsible for supporting the Group's existing operations in Hong Kong, China and South East Asia, propelling its perpetual growth, and looking for new markets and business development opportunities for AXA in Asia.[13]

AXA General Insurance operates in the Asia Pacific region as AXA Asia P&C. The head-office of AXA Asia P&C is located in Singapore. 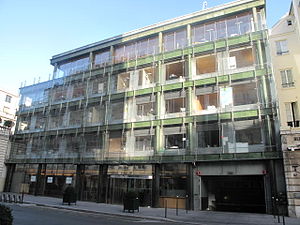 AXA has entered the Indian market through Bharti Enterprises as a joint venture. AXA has three ventures in India, Bharti AXA Life Insurance Company Ltd, Bharti AXA General Insurance Co. Ltd. and Bharti AXA investment Managers, and is also present in fusion with OYAK, as AXA OYAK, in the Turkish market since 1999.

The Metropolitan Bank and Trust Company of the Philippines subsequently entered into joint ventures with corporation the National Mutual Holdings Ltd. of Australia to create Philippine AXA Life Insurance Corporation.

The head office of AXA is located in the 8th arrondissement of Paris.[15] AXA, which already owned 23 Avenue Matignon, acquired the former Hotel de La Vaupalière, an 18th century building, in the late 1990s. Architect Ricardo Bofill integrated the facade of the hotel with a modern glass building that covers the courtyard that the hotel also occupies. The complex serves as AXA's head office.[16]

Besides its artistic and social philanthropic initiatives (AXA Heart in action), AXA created the AXA Research Fund in 2008. Endowed with € 100 millions, it provides support for research focused on understanding and preventing the risks threatening the environment, human life and our societies.

256 basic-research projects were funded within three years, including 230 young researchers, PhDs or in postdoctoral year, working in laboratories all around the world. In addition to this support, AXA gathers every year the young fellows to meet a world-class researcher, exchange best practices and network, above any education or discipline.

The 256 research projects funded as of today are implemented in 22 countries with researchers of 42 different nationalities. The Scientific Board is chaired by Ezra Suleiman and composed of eminent members of the academic world and AXA Group representatives.