Its population as of 31 January 2005 official estimates is 1,056 inhabitants, giving a density of 5,802 inh. per km² (15,028 inh. per sq. mile), which is only half the average density of the city of Dakar. Gorée is both the smallest and the least populated of the 19 communes d'arrondissement of Dakar.

Gorée is famous as a destination for people interested in the Atlantic slave trade but relatively few slaves were processed or transported from there. The more important centres for the slave trade from Senegal were north, at Saint-Louis, Senegal, or to the south in the Gambia, at the mouths of major rivers for trade.[1][2] 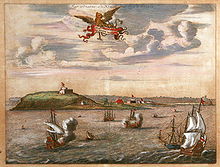 Gorée is a small island 900 metres/3,000 feet in length and 350 metres/1,165 feet in width sheltered by the Cape Vert Peninsula. Now part of the city of Dakar, it was a minor port and site of European settlement along the coast. Being almost devoid of drinking water, the island was not settled before the arrival of Europeans. The Portuguese were the first to establish a presence on Gorée ( circa 1450 CE/AD ), where they built a small stone chapel and used land as a cemetery.

Gorée is known as the location of the House of Slaves (French: Maison des esclaves), built by an Afro-French Métis family about 1780–1784. The House of Slaves is one of the oldest houses on the island. It is now used as a tourist destination to show the horrors of the slave trade throughout the Atlantic world.

Gorée was relatively unimportant in the slave trade. The claim that the "house of slaves" was a slave-shipping point was refuted in 1959 by Raymond Mauny, who shortly afterward was appointed the first professor of African history at the Sorbonne.[2]

Probably no more than a few hundred slaves per year departed from here for transportation to the Americas. They were more often transported as incidental passengers on ships carrying other cargoes rather than as the chief cargo on slave ships. After the decline of the slave trade from Senegal in the 1770s and 1780s, the town became an important port for the shipment of peanuts, peanut oil, gum arabic, ivory, and other products of the "legitimate" trade. It was probably in relation to this trade that the so-called Maison des Esclaves was built.[1]

The island of Gorée was one of the first places in Africa to be settled by Europeans, as the Portuguese settled on the island in 1444. It was captured by the United Netherlands in 1588, then the Portuguese again, and again the Dutch. They named it after the Dutch island of Goeree, before the British took it over under Robert Holmes in 1664.

After the French gained control in 1677, the island remained continuously French until 1960. There were brief periods of British occupation during the various wars fought by France and Britain. In 1960 Senegal was granted independence. The island was notably taken and occupied by the British between 1758 and 1763 following the Capture of Gorée and wider Capture of Senegal during the Seven Years War before being returned to France at the Treaty of Paris.

Gorée was principally a trading post, administratively attached to Saint-Louis, capital of the Colony of Senegal. Apart from slaves, beeswax, hides and grain were also traded. The population of the island fluctuated according to circumstances, from a few hundred free Africans and Creoles to about 1,500. There would have been few European residents at any one time.

In the 18th and 19th century, Gorée was home to a Franco-African Creole, or Métis, community of merchants with links to similar communities in Saint-Louis and the Gambia, and across the Atlantic to France's colonies in the Americas. Métis women, called signares from the Portuguese senhora, were especially important to the city’s business life. The signares owned ships and property and commanded male clerks. They were also famous for cultivating fashion and entertainment. One such signare, Anne Rossignol, lived in Saint-Domingue (the modern Haiti) in the 1780s before the Haitian Revolution. 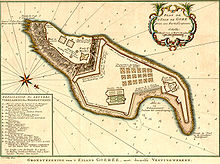 Schley, Jacobus van der, 1715–1779. Island of Gorée and its fortifications

In February 1794 during the French Revolution, France was the first nation in the world to abolish slavery. The slave trade from Senegal stopped. In May 1802, however, Napoleon reestablished slavery after intense lobbying by sugar plantation owners of the Caribbean départements of France. The wife of Napoleon, Joséphine de Beauharnais, daughter of a rich planter from Martinique, supported their position.

As the trade in slaves declined in the late eighteenth century, Gorée converted to legitimate commerce. The tiny city and port were ill situated for the shipment of industrial quantities of peanuts, which began arriving in bulk from the mainland. Consequently, its merchants established a presence directly on the mainland, first in Rufisque (1840) and then in Dakar (1857). Many of the established families started to leave the island.

Civic franchise for the citizens of Gorée was institutionalized in 1872, when it became a French “commune” with an elected mayor and a municipal council. Blaise Diagne, the first African deputy elected to the French National Assembly (served 1914 to 1934), was born on Gorée. From a peak of about 4,500 in 1845, the population fell to 1,500 in 1904. In 1940 Gorée was annexed to the municipality of Dakar.

Gorée is connected to the mainland by regular 30-minute ferry service, for pedestrians only; there are no cars on the island. Senegal’s premier tourist site, the island was listed as a UNESCO World Heritage Site in 1978. It now serves mostly as a memorial to the slave trade. Many of the historic commercial and residential buildings have been turned into restaurants and hotels to support the tourist traffic. 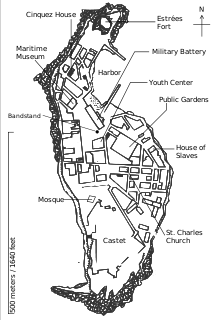 With the foundation of Dakar in 1857, Gorée gradually lost its importance. In 1872, the French colonial authorities created the two communes of Saint-Louis and Gorée, the first western-style municipalities in West Africa, with the same status as any commune in France. Dakar, on the mainland, was part of the commune of Gorée, whose administration was located on the island. However, as early as 1887, Dakar was detached from the commune of Gorée and was turned into a commune in its own right. Thus, the commune of Gorée became limited to its tiny island.

The current mayor of Gorée is Augustin Senghor, elected in 2002.

Other attractions on the island include three museums, one dedicated to women, one to the history of Senegal and one to the sea. The seventeenth century Gorée Police Station, Gorée Castle and a small beach are also of interest to tourists.

The island is a UNESCO World Heritage Site.

Archaeological research on the historical occupation of Gorée has been recently undertaken by Dr. Ibrahima Thiaw (Associate Professor of Archaeology at the Institut Fondamental d'Afrique Noire (IFAN); and the University Cheikh Anta Diop of Dakar, Senegal); Dr. Susan Keech McIntosh (Professor of Archaeology, Rice University, Houston, Texas); and Raina Croff (PhD candidate at Yale University, New Haven, Connecticut). Dr. Shawn Murray (University of Wisconsin–Madison) also contributed to the archaeological research at Gorée through a study of local and introduced trees and shrubs, which aids in identifying the ancient plant remains found in the excavations.[3]

Gorée Island has been featured in many songs, due to its history related to the slave trade.

The following songs have significant references to Gorée Island:

In 2007 the Swiss director Pierre-Yves Borgeaud made a documentary called Retour à Gorée (Return to Gorée).