Chessington World of Adventures Resort is a theme park and zoo in South West London, England. It lies 12 miles (19 km) south of Central London. Historically opened as Chessington Zoo in 1931, a theme park was developed alongside it, opening in 1987. In 2010, the park attracted 1.4 Million People.

In 1984 Madame Tussauds Ltd., (later to become the Tussauds Group Ltd.) which owned Chessington Zoo decided the failing attraction, which was suffering declining visitor numbers, needed a radical make-over to restore popularity. The Director of Development, Ray Barratt, commissioned John Wardley to formulate a set of proposals to revitalize the asset. The Pearson Group (the parent company of Tussauds) backed the scheme, and a planning application was submitted to the Royal Borough of Kingston upon Thames.

This plan included a new monorail, powered coaster, log flume and a dark ride (all supplied by the German ride manufacturer Heinrich Mack GmbH & Co). The new rides were to operate on a pay-one-price admission basis, and replace the existing pay-as-you-go fairground rides. The monorail, named the Safari Skyway, opened early in 1986 to give the visitors a foretaste of the new attraction. "Chessington World of Adventures" opened as a theme park in 1987. The attractions were all heavily themed with emphasis on atmosphere and effects, meaning Chessington was one of the first true theme parks in Britain.

On 22 May 2007, The Tussauds Group was taken over by Merlin Entertainments Ltd which owns other brands such as the Sealife Centre, and The Dungeons. This meant that Alton Towers, Thorpe Park and Madame Tussauds were also taken over as well. As a result of this purchase Merlin became the second largest entertainments operator in the world ahead of Parques Reunidos and second only to Disney.

The park has a large selection of attractions. It also has over 1,000 animals, many of which can be seen from the Safari Skyway, an elevated monorail around the Zoo. Since 1998 Chessington has been in the same ownership as nearby Thorpe Park, and since 2007, Legoland Windsor.[1]

The park is split into ten themed lands, each with its own location, setting and rides.

A view of the sea lions from the Safari Skyway, August 2006.

The Zoo is one of the oldest areas in the park and is split in two. The west side of the park is home to Trails of the Kings; a walkthrough attraction home to enclosures for gorillas, tigers, lions and binturong. The east side contains smaller enclosures home to capybaras, rhea, mara, wallabies, meerkats and agouti in the Creature Features area. There is also a 'Monkey & Bird Garden' with a squirrel monkey walkthrough as well as a host of other exotic birds and monkeys. Just outside this is the Children's Zoo, where children may feed domestic farm animals.

Chessington Zoo also has an area called Sea lion Bay, which features sea lion presentations several times a day and Creepy Caves, a reptile house. In 2008, a Sea Life Centre opened on the site of the previous children's zoo, which was later relocated, and contains British and tropical fish.

Recently the Trail of the Kings section of the Zoo underwent an inspection with the outcome that the gorilla enclosure was too small. The zoo was warned that if the housing is not expanded soon it would lose its licence to house gorillas.[2] Planning applications have since been released to build a bigger building for the gorillas, expected to be opened in 2010.

The Wanyama Village & Reserve opened in late May 2010, in a unused area behind the Holiday Inn hotel and houses animals such as Grévy's Zebra, Sitatunga antelope and Scimitar horned oryx.

Chessington closed Beanoland in late 2009 when the contract expired. Renamed 'Wild Asia', the new themed area opened in March 2010. Lorikeet Lagoon opened as part of Chessington's plan to integrate the zoo with the theme park; visitors may feed the birds nectar.

Themed around Ancient Egypt, this area is home to two rides, Tomb Blaster and Rameses Revenge. 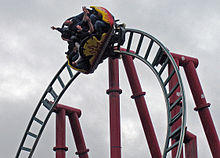 Land of the Dragons

Land of the Dragons opened in 2004 and is a self contained, dragon-themed land containing rides and attractions for younger children.

There are two play areas in the main section: "Dragon's Playhouse", a large soft play area; and adjacent to this is "Canopy Capers", an outdoor treehouse rope bridge attraction. There are also child-appropriate rides and the "Dragons Tale Theatre".

Market Square is the central area of the park and has shops, video arcades and food stalls; it also contains the entrance to Safari Skyway, a monorail that opened in 1987 offering a guided tour of the zoo, lawn and mansion area.

Themed as a Mexican and Far West town, Mexicana is home to two rollercoasters. 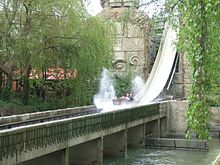 Pirates Cove is adjacent to "Transylvania", home to the Black Buccaneer, a swinging pirate ship installed in 1988 and also Seastorm, a small circular ride.

Toytown has a number of gentle rides for children. The rides include the Carousel, Flying Jumbos and the Berry Bouncers, Tiny Truckers, Toadie's Crazy Cars. 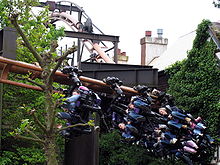 Transylvania is home to two major rides, the Vampire and the Bubbleworks. A new themed pathway was added to the back entrance of Transylvania for the park's Halloween Hocus Pocus event in 2009.

Located next to the Lodge Gate, is the theme park's Holiday Inn hotel. The resort houses entertainment, such as bars and restaurants, a large indoor swimming pool, and the Wanyama Village and Reserve.

Next to the Explorer Gate is a basic Premier Inn hotel with Beefeater restaurant(The Monkey Puzzle).

Chessington World of Adventures announced in a press conference that they have a medium-term plan to refurbish existing areas of the park and add new rides. Retheming Beanoland into Wild Asia was the start of the new development and opened including the new ride Kobra for 2010.

The park had been given planning permission to re-theme the Monkey & Bird Garden as Monkey Kingdom in 2012, complete with new enclosures, walkthrough attractions, jungle theming, and play areas. However, at the moment this has been put on hold in favour of other projects, and no details of these have been released.[3]

During the October half-term, the park hosts a "Halloween Hocus Pocus" event. During this event pumpkins, skeletons, cobwebs and witch characters can be found in the park.

Every year, in the February Half Term, the zoo opens to the public for "Zoo Days", where families can see the animals during the winter period when the theme park remains closed.

In 2009, Chessington hosted a one-off event to celebrate the opening of the Ice Age: Dawn of the Dinosaurs movie. The theme park opened a temporary maze attraction just outside Beanoland featuring all the characters and scenes from the film. The event ran from 20 June and finished on 31 August 2009.[5]

Chessington World Of Adventures is branding itself as a resort with a theme park, zoo, hotel and Sea Life Centre.