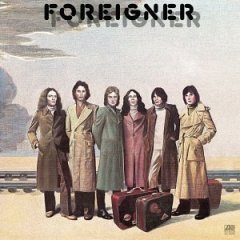 "Foreigner" is the debut studio by rock band Foreigner, released in 1977.