History of rail transport in Pakistan

History of rail transport in Pakistan 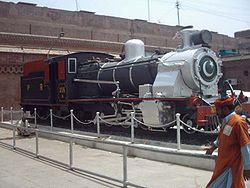 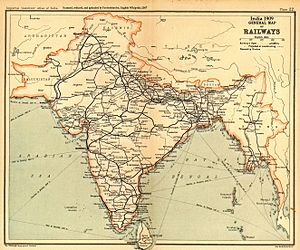 Extent of Indian Railway network in 1909

Pakistan has a rich railway heritage spanning almost 200 years which it owes the British. It was in 1847 when the first railway was imagined but it was not until 1861 when it came into existence in the form of the railway built from Karachi to Kotri. Pakistan has stayed true to this rich heritage because since rail transport is possibly the most popular mode of non-independent transport in Pakistan.

The possibility of Karachi as a sea port was first noticed in the middle of 19th century. Sir Henry Edward Frere was appointed Commissioner of Sind in 1851 after its inclusion in Bombay Presidency and sought permission from Lord Dalhousie to begin a survey for a sea port. He also initiated the survey for a Railway line in 1858. It was proposed that a railway line from Karachi City to Kotri, steam navigation up the Indus and Chenab rivers up to Multan and from there another railway to Lahore and beyond be constructed.

The Scinde Railway was formed in 1855 and on 13 May 1861 succeeded in connecting Karachi to Kotri. This was the first railway line for public traffic between Karachi City and Kotri, a distance of 108 miles (174 km). 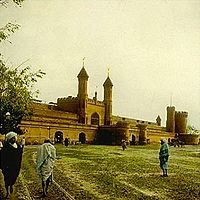 The 4 sections, i.e., Scinde (Sindh) Railways, Indus Flotilla Company, Punjab Railway and Delhi Railways, working in a single company, were later on amalgamated into the Scinde, Punjab & Delhi Railways Company and purchased by the Secretary of State for India in 1885, and in January, 1886, it was named North Western State Railways, which was later on renamed as North Western Railway. The line between Karachi City and Kiamari was opened on 16 June 1889. During 1897 the line from Keamari to Kotri was doubled.

The railway line from Peshawar to Karachi closely follows Alexander’s line of march through the Hindu Kush mountains to the Arabian Sea. Different sections on the existing main line from Peshawar to Lahore and Multan and branch lines were constructed in the last quarter of 19th century and early years of 20th century. In 1961, the Pakistani portion of the North Western Railway was renamed Pakistan Railways.

At the time of independence, 1,947 route miles (3,133 km) of North Western Railways were transferred to India, leaving 5,048 route miles (8,124 km) to Pakistan. In 1954, the railway line was extended to Mardan and Charsada, and in 1956 the Jacobabad-Kashmore 2 ft 6 in (762 mm) gauge line was converted into broad gauge. The Kot Adu-Kashmore line was constructed between 1969 and 1973 providing an alternative route from Karachi up the country.