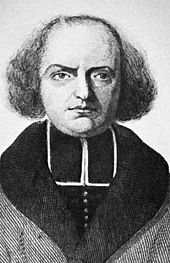 Jacques Paul Migne (25 October 1800 - 24 October 1875) was a French priest who published inexpensive and widely-distributed editions of theological works, encyclopedias and the texts of the Church Fathers, with the goal of providing a universal library for the Catholic priesthood.[1]

He was born at Saint-Flour, Cantal and studied theology at Orléans. He was ordained in 1824 and placed in charge of the parish of Puiseaux, in the diocese of Orléans, where his uncompromisingly Catholic and royalist sympathies did not coincide with local patriotism and the new regime of the Citizen-King. In 1833, after falling out with his bishop over a pamphlet he had published, he went to Paris, and on 3 November started a journal L'Univers religieux, which he intended to keep free of political influence: it quickly collected 1800 subscribers. He edited it for three years. (It afterwards became his co-editor Louis Veuillot's ultramontane organ, L'Univers.)

A complete edition of patrology

Migne had become convinced of the power of the press and the sheer value of raw information widely distributed. In 1836 he opened his great publishing house, Imprimerie Catholique, at Petit Montrouge, in the outlying 14th arrondissement of Paris. There he brought out in rapid succession numerous religious works meant for the use of the lesser clergy at popular prices that insured a wide circulation. The best known of these are: Scripturae sacrae cursus completus ("complete course in sacred scripture") which assembled a wide repertory of commentaries on each of the books of the Bible, and Theologiae cursus, each of them in 28 vols, 1840-5; Collection des auteurs sacrés (100 vols., 1846-8); Encyclopédie théologique (171 vols., 1844-6).

The three great series that have made his reputation were Patrologiae cursus completus, Latin series (Patrologia Latina) in 221 vols. (1844-5); Greek series (Patrologia Graeca), first published in Latin (85 vols., 1856-7); then published with Greek text and Latin translation (165 vols., 1857-8). Though scholars have always criticised them, these hastily edited, inexpensively printed and widely distributed texts have only slowly been replaced during a century and a half with more critically edited modern editions. Though the cheap paper of the originals has made them fragile today, the scope of the Patrologia still makes it unique and valuable, wherever modern editions do not yet exist. It is a far more complete collection of Patristic and later literature than anything that has appeared subsequently or is likely to. To create so much so quickly, Migne reprinted the best or latest earlier editions available to him. In the PG the Latin translations were often made in the renaissance before any Greek text had been printed, and so do not necessarily match the Greek text very accurately. The indexes themselves are useful for locating references in the patristic writings. The collection is now available on CD-ROM at some research libraries and an electronic version is online as a subscriber service in addition to which the series has been made available through Google Books and archive.org.

His publishing house was complemented during the Second Empire by painter artists' workhalls for the decoration of churches: three of their main works, in the style of Eugène Delacroix, still remain in the choir of the church of Saint John the Baptist of Audresselles (Pas de Calais, France).

Struggle with the publishing establishment and the Catholic hierarchy

Migne by-passed the bookselling establishment with direct subscriptions. His Imprimerie Catholique developed into the largest privately held press in France. However, for Migne, on the night of 12-13 February 1868 a devastating fire, which began in the printing plant, destroyed Migne's establishment, which was also producing religious objects. In spite of his insurance contracts, Migne was able to retrieve only a pittance.

Shortly afterwards Mgr Georges Darboy, archbishop of Paris, forbade the continuance of the business, and even suspended him from his priestly functions. The Franco-Prussian War of 1870 inflicted further losses. Then from the curia of Pope Pius IX came a decree condemning the use of Mass stipends for the purchase of books, in which Migne and his publications were especially named.

Migne died without ever having regained his former prosperity, and his Imprimerie Catholique passed in 1876 into the hands of Garnier Frères.

The Patrologia Latina and the Patrologia Graeca, (along with the Monumenta Germaniae Historica) are among the great 19th century contributions to the scholarship of patristics and the Middle Ages. Within the Roman Catholic Church, Migne's editions put many original texts for the first time into the hands of the priesthood.