Scouting in Arkansas has a long history, from the 1910s to the present day, serving thousands of youth in programs that suit the environment in which they live.

The Arkadelphia Boy Scout Hut in Arkadelphia is on the National Register of Historic Places.

In 1914, the BSA gave local councils the power to ban African Americans from Scouting. (Macleod, David Irving. Building Character in the American Boy: The Boy Scouts, YMCA, and Their Forerunners, 1870-1920. University of Wisconsin Press: Madison, WI, 1983. P 213.) Until 1974, some southern councils of the Boy Scouts of America were still racially segregated. (The Old Hickory council did not integrate until 1974. See "Camp Timeless; Raven Knob Marks 50 Years as Boy Scouts Still Enjoy Its Wonder." Winston-Salem Journal, 17 July 2005, B1.) Previous entries that claimed segregated Scouting ended in 1948 are false. The 1974 settlement between the BSA and the NAACP over racial discrimination required the BSA to issue its first non-discrimination policy regarding race (Stipulation and Order, NAACP, et al. v. Boy Scouts of America, et al. (Civil No. C-74-329): U.S. District Court for the District of Utah, Central Division, 1974.)

There are six Boy Scouts of America local councils in Arkansas.

Headquartered in El Dorado, Arkansas and supported by the Abooikpaagun Lodge #399 of the Order of the Arrow. 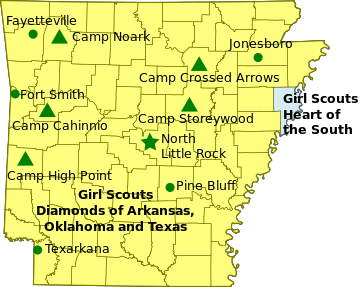 There are two Girl Scout councils in Arkansas.

Girl Scouts - Diamonds of Arkansas, Oklahoma and Texas serves girls in all of Arkansas except Crittenden county, girls in Adair, LeFlore, and Sequoyah counties in Oklahoma, and girls in Bowie and Cass counties in Texas.

Girl Scouts Heart of The South