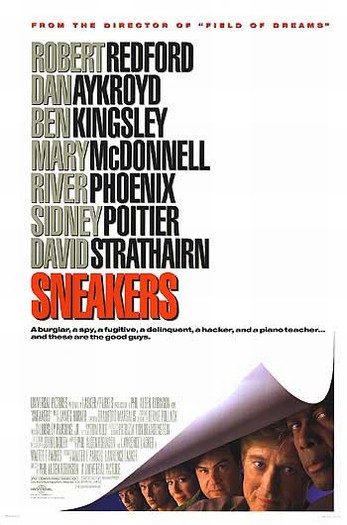 The movie opens in 1969, where Martin Brice and his friend Cosmo have been hacking prominent computer systems to play pranks. However, as Martin goes out to get pizza for the two, the police arrive and arrest Cosmo as Martin witnesses the incident from the street. Martin becomes a and takes up the of Martin Bishop.

In the present, Martin (now played by ) has created a of "security specialists". In addition to Bishop, the team is: Donald Crease (), a former agent and a high strung family man; "Mother" (), a with unsurpassed technical skills and ; Carl Arbogast (), a young genius; and Erwin 'Whistler' Emory (), a wisecracking blind man with superb hearing. They break a bank's security system and report the results to the managers who hired them. Martin is approached by Dick Gordon and Buddy Wallace (, Eddie Jones), who state they are from the National Security Agency and know of Martin's past. In exchange for not incarcerating Martin, they ask Martin to recover a "black box" decoder device that mathematician Gunter Janek () has been developing for the n government under the guise of a company called "Setec Astronomy". Martin is forced to take the job and to reveal his past to his team to get their help. He also calls on his former girlfriend, Liz (), to help with social engineering for the job.

The team set up surveillance on Janek, but it is Whistler who figures out that the device is hidden in the answering machine in Janek's office. They retrieve the box then hold a large party in anticipation of the reward for its recovery. Mother, Whistler, and Carl explore what the box can do while Martin, Liz and some others are playing . Martin recognizes that "Setec Astronomy" is a fake name, and he and Liz attempt to find s finally settling on "Too many secrets". Simultaneously, the other team members discover the box is a universal decryption device that is able to bypass the of any computer system. Martin calls for a until he and Donald can exchange the box. The next day the two drive to meet the NSA agents, but as Martin completes the exchange, Donald sees a newspaper article that Gunter was found murdered. He signals Martin that something is wrong and they both quickly leave the location. They soon learn that the Gordon and Wallace were never NSA agents, and that Janek was creating the box for the NSA.

Martin attempts to learn more about Gordon and Wallace from Gregor, a Russian consul member and acquaintance, but ends up captured by fake FBI agents, who kill Gregor with Martin's gun. Martin is knocked senseless, thrown into the trunk of a car and driven to an unknown location. Martin wakes up to find his old friend Cosmo (now played by ) who explains that because of his computer skills he was able to aid an family and escape from from jail by faking his own death. Cosmo has been looking for the "black box", nominally to protect the family's interests. However, after further prying, Martin learns that Cosmo also plans to use the box to crash the world economy (by instigating s, for example). Since Martin won't cooperate in this plan, Cosmo uses the box to link Martin's current identity to his past on the FBI computers, and then has Martin rendered unconscious again and returned to the city.

Martin quickly returns to his team and has them abandon their office space, moving into Liz's apartment. They call the NSA using complex call routing to prevent tracing and offer to recover the box in exchange for . Before the negotiations are complete, however, they disconnect the call to avoid being traced back to their location.

With the help of Whistler, Martin recalls enough of the sounds of the trip to Cosmo's office to be able to pinpoint its location, a toy company that is a front for Cosmo. Through various means, the team learns which office is Cosmo's, and what security features are in place and figure out how to bypass them. However, their plan involves entering Cosmo's secure room through the adjacent room, the office of Werner Brandes (). Since one control requires voice identification, the team use Liz to go on a computer date to get enough spoken material to recreate the correct . With the sampled passphrase and Brandes security card, the rest of the team infiltrates the building. Martin himself takes the final steps to retrieve the black box. Unfortunately, Werner becomes suspicious and takes Liz to the toy company. Cosmo is about to dismiss the incident until he finds out that the date was set up through a computer dating service. The entire team, except for Whistler and Martin are captured and held at gunpoint.

Through coaching from Martin, Whistler is able to drive the van setting up the escape of the team. Martin is about to escape as well when he is confronted by Cosmo who threatens to shoot Martin. Martin turns over the box, apologizing to Cosmo for what happened those years ago, and leaves. As the group escapes, Cosmo opens the box and finds that it is empty; Martin has swapped the real box with a plain answering machine.

The group returns to their old offices where they are surrounded by NSA agents led by Bernard Abbott (), who demands Martin return the box. Remembering a statement made by Gregor about the differences between Russian and American encryption, Martin then realizes that the box is only effective against American systems - the NSA had developed the box for domestic surveillance. As they are not legally permitted to do this, Martin realizes that he still has some leverage. In exchange for the box and his silence about it, Martin asks for his criminal record to be cleared. The rest of the group realizes they also can ask for nearly anything in exchange: Donald asks for a round-the-world trip for him and his wife; Mother, a ; Carl, simply a date with one of the female NSA agents, who agrees to his request; and Whistler, "peace on earth and goodwill toward men." The NSA agents leave with the box, but Martin tells them that it doesn't work. After they leave, he then opens his hand to reveal the key processor from the box.

The last scene is a television news report: the reporter announces that the has misplaced its funds and entered bankruptcy, while, simultaneously, , , and are seeing record earnings, "due mostly to large, anonymous donations," mirroring Martin's computer crimes from the beginning of the film and hinting that he has resumed his past habits. Or, possibly, that the NSA was fulfilling its promise to Whistler.