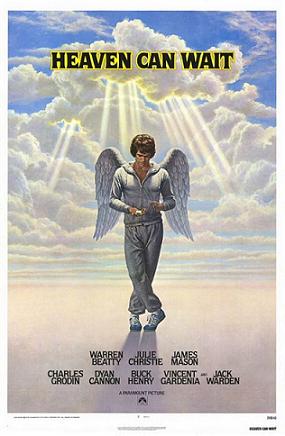 This movie is a remake of the film "". The film was subsequently remade in 2001 as "Down to Earth". (The 1978 movie with Beatty should not be confused with the 1943 movie also called "Heaven Can Wait".)

Joe Pendleton (), a backup quarterback of the team Los Angeles Rams, is looking forward to leading his team to the when he is involved in a terrible collision with a truck. An over-anxious guardian angel on his first assignment (Buck Henry) plucks Joe out of his body early in the mistaken belief that his death is imminent, and Pendleton arrives in the afterlife.

Once there, he refuses to believe that his time was up, and upon investigation, the mysterious Mr. Jordan () discovers that he is right. He is not destined to die until much later. Unfortunately, his body has been cremated, so a new body must be found. After rejecting several possibilities (men who are about to die), Joe is finally persuaded to accept the body of millionaire Leo Farnsworth. Farnsworth has just been drugged and drowned in his bathtub by his wife Julia () and her lover, Farnsworth's personal secretary Tony Abbott ().

Julia and Tony are naturally confused when Farnsworth appears, alive and well. Joe/Farnsworth buys the Los Angeles Rams in order to lead them to the as their quarterback. In order to succeed, he must first convince, then secure the aid of, long-time friend and trainer Max Corkle () to get his new body into shape.

At the same time, he falls in love with an environmental protester, Betty Logan (), who disapproves of what the industrialist's company is doing. However, Julia and Abbott are not quite ready to give up on their murderous plans, and Abbott shoots Farnsworth dead. Joe then occupies another body, that of quarterback Thomas Jarrett, whose death is imminent. Joe leads the Rams to victory. However, Mr. Jordan then removes Joe's memory of his past life and departs. Joe becomes Thomas Jarrett and the cosmic balance is restored.

There were a number of former Los Angeles Rams players to have a cameo role in the film. Among those credited are , , and Jack Snow.

* as Joe Pendleton/Leo Farnsworth/Tom Jarrett
* as Betty Logan
* as Mr. Jordan
* as Max Corkle
* as Tony Abbott
* as Julia Farnsworth
* as The Escort
* as Detective Lieutenant Krim
* as Sisk
* as Bentley
* as Everett
* as Corinne
* as Lavinia