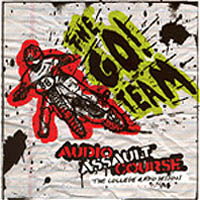 "Audio Assault Course - The College Radio Sessions" is an EP released by in 2006. It contains seven tracks, six of which were recorded from various radio sessions the band performed over the year. The final track on the EP is a mashup of "Huddle Formation" and "Ladyflash" (both tracks taken from their debut album ), by former member .