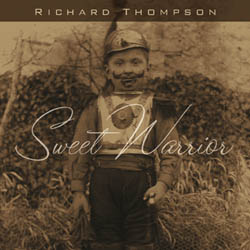 "Sweet Warrior" is an album by Richard Thompson released in 2007. Thompson financed the recording of this album himself and then licensed the finished album to various labels for distribution. On its release, "Sweet Warrior" entered 's top 20 for music sales.

The track "Dad's Gonna Kill Me" was given an advance release via Thompson's own web site and . The song was singled out for praise by critics [cite web
url = http://www.popmatters.com/pm/music/reviews/42452/richard-thompson-sweet-warrior/
title = Richard Thompson, Sweet Warrior
publisher = PopMatters
date = 2007-05-28] and featured prominently in Thompson's live performances in early 2007.This song's lyrics make extensive use of U.S. military (the "Dad" of the title is slang for ""), and convey the thoughts and feelings of an uneasy U.S. soldier stationed in Iraq.

This advance release also enjoyed airplay on several radio stations and attracted generally favourable comments from the press and advance publicity for the album.

All songs written by Richard Thompson:

Bonus tracks on the release for the Japanese market: