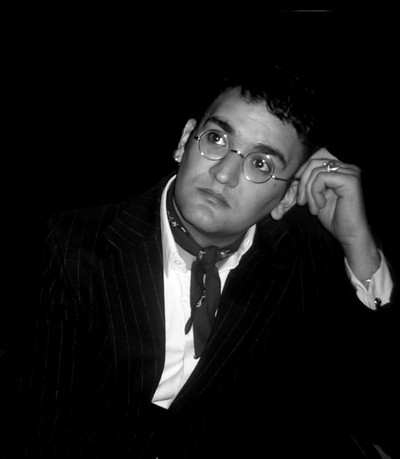 Tim Arnold is an English songwriter and musician from , London.

He was the frontman of a band called Jocasta in the mid nineties.

He has released 9 albums, 1 with Jocasta and 8 solo albums.

Tim Arnold's childhood was a rollercoaster ride (mostly in a VW Camper Van!) through Europe, as his mother (‘60s singer ) performed cabaret in theatres and nightclubs. Between the ages of 8 and 14, he lived in France, Italy, Spain and the UK.

Hailing from a working class theatrical family, the smell of the grease paint was so strong that at 14 years old he decided to leave his mother's home in Spain and return alone to England to study at the School and join the . Arnold was the youngest initiate ever to join the ancient order of which the poet had been a former chief. Bizarrely enough, Arnold completed the Orders’ Bardic teachings in 1990 and so, therefore, is actually a ‘Bard’ (no doubt influencing a director to appoint Arnold as a composer at Shakespeare’s Globe in 1999). It was at The Rudolf Steiner School that he formed the band with best friend . In 1994, Arnold and the band moved from Hertfordshire to London. Arnold originally intended to take a place at St. Martin's School of Art that he had been offered but instead took a job in Soho, working as a chef by day and a doorman by night in an illegal drinking bar.

By 1995, Jocasta had signed a worldwide record deal with Sony. They were signed by the then titled subdivision of Sony 'LRD' or 'Licensing Repertoire Division'. A company within Sony that was set up to work with smaller record labels in the UK, most effectively so with 's ' stable of artists such as Oasis, , etc.

Jocasta's management set up their own label, V4 records and were distributed by Sony for their first two singles 'Go' and 'Change Me'. The success of the singles earned the band much praise at Radio and a rosy future was believed to be likely. However, in early 1996, , the managing director of LRD announced he would be leaving Sony to set up 's newly formed label . Although he had intended to take Jocasta over to V2, the band had recently been getting attention from Radio DJ's and . Ever keen to protect their investment, Sony kept the band and moved them over to to be looked after by the head of the company, .

Epic released the single 'Something to Say' and upon poor sales, decided to re-release the bands previous singles 'Go' and 'Change Me'. Although an artistically frustrating move for the band, it worked. At the start of 1997, 'Go' was 'A listed' by and championed by Jo Whiley as single of the week, it also featured on a number of TV shows, including the BBC Saturday morning show, and ITV's . After a short European tour, Epic then re-released 'Change Me' which became 's single of the week, again at Radio One.

By now, a growing fan base expected Jocasta to become that year’s model. Arnold’s writing was unique in the unprecedented way he managed to infuse his poetry in his music, also bridging the gap between his classical arrangements and rock sensibilities. It set Jocasta apart from the herd, more Britrock than Britpop. The debut album, ‘No Coincidence’, recorded with the , is a collection of well-crafted and powerful songs that should have become cult anthems with a little help from destiny. The band played sold-out venues of 5,000 capacity, but the sort of fate that was a favourite subject of Arnold’s songs (and the source of his band’s name) took a sad turn. In a bid to win the ‘Business As Usual Award’, Sony terminated the contract on the day the album was released.

In 1999 he signed a publishing deal with . he also became Master of Music at Theatre, composing original music for "", a new verse play written especially for the Globe.In 2000 he briefly begun a new band called . The band recorded some demo's at in Monmouth, Wales, but nothing materialised.

In 2001, Arnold left V2 and signed to Universal Music Publishing. For two years, he wrote and produced music for newly signed artists at Universal, mostly Pop, R & B, Garage and Hip Hop.

In 2003 Arnold travelled to a Buddhist monastery in Thailand. He was practically adopted by the abbot of the monastery who encouraged him with his music and that, in turn, opened new artistic horizons. Under the guidance of the monks, he engaged in the composition of an album in which the music was created by following cracks in the earth, which metamorphosed into pop rock melodies.

"" was his debut solo album, written and recorded in Thailand with the assistance of the monastery's community.

This marked the start of a frenetic urge to compose new material. Arnold released a series of albums in a row, finding a great success (particularly in the music press) with his people and places album "" (recorded in ’s spiritual home – ), quite simply the best and only concept album about London’s Golden Mile by a writer who, along his way, has both dined and begged at The Ritz. During the promotion of the album, Arnold began to perform his remarkable and spine-tingling rendition of the classic, ‘’, a most poignant song considering his history.

This album also features an in depth and achingly honestinterview by BBC London's very own lord of pop, Gary Crowley.As well as finally revealing the real secrets of Soho, Gary gets to the heartof Tim's fascinating lifelong journey through music.

A companion to 'Secrets of Soho'

In 2006, Arnold got together with Chilean lyricist and journalist, Antonio Ramirez and embarked on writing new lyrics to selected tracks that Arnold had previously recorded in English.

The result is a collection of Spanish versions of songs from Arnold's first three solo albums, including a song called 'Perfectos' (originally recorded with Jocasta as 'Perfect') and a cover of the famous Mecano song 'Hijo De La Luna', which literally means 'Moonchild' - a fitting title for a Cancerian singer.

“I recorded this album in one sunny afternoon in France.I have done so with care and respect for a fellow songwriterwhose private life often overshadows his great songwriting. It was a lot of fun to do and I hope I have served the songs well.”

By his own admission, Another World is the album that Tim Arnold has always wanted to make, particularly in his role as a string arranger.Both Arnold and producer Jack Reynolds (former Jocasta guitarist) set out to make an album that was acoustic, intimate, string laden and simply beautiful.

This album has shades of Damien Rice, Nick Drake, Cat Stevens and a deliberate nod to Michael Nyman, particularly on the closing track, Feeling The Change Inside.

Another World was made with the kind of DIY initiative that is so often applauded these days, although it was not really a matter of choice.

Despite being well known throughout the echelons of the British music industry, this album has been made entirely independently. Whatever the reason, it has not disheartened this tenacious solo artist from making album after album, resulting, now, in his best work to date.

The contributing musicians are some of the finest in London, who usually play for more popular artists. Cellist Nick Holland (Michael Nyman, Balanescu Quartet), violinist Jonathan Hill (Feeder,Travis) and Anna Phoebe (Nitin Sawhney, Oi Va Voi). Their involvement in the album is one of loyal support for one of the UK's most dedicated and prolific singer songwriters.

A collection of Arnold songs, re-recorded instrumentally and re-arranged for strings and piano. Released exclusively as a free Christmas album by 's label, We7.

The Waits is the brainchild of Tim Arnold, a prolific solo artist who also served as the driving force behind 90’s Brit Rock band, Jocasta.

The project was originally going to be a solo effort, but soon evolved into a band after he recruited the talents of classical musicians Nick Holland and Jonathan Hill, later to be joined by bassist, Pete Skipper and drummer Dave Keeler.

The band’s music is deliberately epic, rocking, and orchestral, with just enough of Arnold’s signature pop style to make the songs catchy and addictive.

All of the songs share a unifying thread revolving around Shakespearean themes.

“If you had to chose one theme in Shakespeare’s works that showed us more about the ‘human condition’ than any other, what would it be and why?"

Many of these actors replied with insightful answers, inspiring Arnold to write the lyrics that he now describes as ‘personal reactions’ to those replies.

Fusing Mozart with the angst of the Smashing Pumpkins and ripping Rimsky Korsakov into the realm of Radiohead-esque sound-scapes, please welcome the concept and band, that is… The Waits.

Ever since 1996, in interviews, Arnold has always confessed his passion for the music of . Apparently it was after reading the back cover of "" when he was 12 and seeing all the instruments that Oldfield played, that Arnold decided that making music was going to be his profession (Arnold actually worked with Tubluar Bells producer, Tom Newman in 1998).

Whilst living in Spain as a child, Arnold relied on his elder brother to keep him up to date with current music. Arnold became well acquainted with the music of , namely , Zakir Hussain, and . Whilst these artists influenced Arnold as a musician, his love of , , Sting and Queen is what made him start writing pop songs instead of long 20 minute pieces of music.

Whilst in Spain he also became a fan of , even going so far as to cover on a Spanish language album that was released in 2007.

By his own admission, Arnold's melodies are largely influenced by the classical music he grew up listening to such as , and . He has also said that musically, Jocasta was an experiment to meld the sound of the with . The influence of has been mentioned more than most and is often due to Arnold's trademark NHS granny spectacles which he has worn since he was 9 years old.