Robert Doisneau (April 14, 1912, Gentilly, Val-de-Marne – April 1, 1994[1]) was a French photographer. In the 1930s he used a Leica on the streets of Paris; together with Henri Cartier-Bresson he was a pioneer of photojournalism.[2] He is renowned for his 1950 image Le baiser de l'hôtel de ville (Kiss by the Hôtel de Ville), a photo of a couple kissing in the busy streets of Paris. Robert Doisneau was appointed a Chevalier (Knight) of the National Order of the Légion d'honneur in 1984.[1]

Robert Doisneau was known for his modest, playful, and ironic images of amusing juxtapositions, mingling social classes, and eccentrics in contemporary Paris streets and cafes. Influenced by the work of André Kertész, Eugène Atget, and Henri Cartier-Bresson, in over twenty books Doisneau presented a charming vision of human frailty and life as a series of quiet, incongruous moments.

Doisneau's work gives unusual prominence and dignity to children's street culture; returning again and again to the theme of children at play in the city, unfettered by parents. His work treats their play with seriousness and respect. In his honour, and owing to this, there are several Ecole Primaire (Primary Schools) named after him. An example is at Veretz (Indre-et-Loire).

Robert Doisneau is one of France's best known photographers, for his street photography and the many playful images in everyday French life. His photographs over the course of several decades provide people with a great record of French life. He has published over twenty books with realistic and charming pictures of personal moments in the lives of individuals.

Doisneau's father, a plumber, died on active service in World War I when Robert was about four. His mother died when he was seven so he was then raised by an unloving aunt.[1][3]

At thirteen he enrolled at the École Estienne,[4] a craft school where he graduated in 1929 with diplomas in engraving and lithography. Here he had his first contact with the arts, taking classes in Figure drawing and Still life.

When he was 16 he took up amateur photography but was reportedly so shy that he started by photographing cobble-stones before progressing to children and then adults.[3]

At the end of the 1920s Doisneau found work as a draughtsman (lettering artist) in the advertising industry at Atelier Ullmann (Ullmann Studio), a creative graphics studio that specialised in the pharmaceutical industry. Here he took an opportunity to change career by also acting as camera assistant in the studio and then becoming a staff photographer.[3][5][6]

Photography in the 1930s

While working at Atelier Ullmann Doisneau had helped out as a camera assistant and developed into a staff photographer, but in 1931 he left both the studio and advertising, taking a job as an assistant with the modernist photographer André Vigneau.[3][5][6]

In 1932 he sold his first photo story to Excelsior magazine.[1]

In 1934 he began working as an industrial advertising photographer for the Renault car factory at Boulogne-Billancourt.[3] Working at Renault increased Doisneau’s interest in working with photography and people. In 1991 he admitted that the years at the Renault car factory marked “the beginning of his career as a photographer and the end of his youth.” Five years later, in 1939, he was fired for being constantly late. He was forced to try freelance advertising, engraving and postcard photography to earn his living. At that time the French postcard industry was the largest in Europe, postcards served as greetings cards as well as vacation souvenirs.[7]

In 1939 he was hired by Charles Rado of the Rapho photo agency and travelled throughout France in search of picture stories. This is where he took his first professional street photographs.

Doisneau worked at Rapho until the outbreak of World War II, whereupon he was drafted into the French army as both a soldier and photographer. He was in the army until 1940 and from then until the end of the war in 1945 used his draughtsmanship, lettering artistry and engraving skills to forge passports and identification papers for the French Resistance. 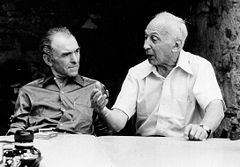 Robert Doisneau (left) and André Kertész in 1975, by Wolfgang H. Wögerer, at Arles.

Some of Doisneau's most memorable photographs were taken after the war. He returned to freelance photography and sold photographs to Life and other international magazines. He briefly joined the Alliance Photo Agency but rejoined the Rapho agency in 1946 and remained with them throughout his working life, despite receiving an invitation from Henri Cartier-Bresson to join Magnum Photos.[1][7]

His photographs never ridiculed the subjects; thus he refused to photograph women whose heads had been shaved as punishment for sleeping with Germans.[3]

In 1948 Doisneau was contracted by Vogue to work as a fashion photographer. The editors believed he would bring a fresh and more casual look the magazine but Doisneau didn’t enjoy photographing beautiful women in elegant surroundings, he preferred street photography. When he could escape from the studio, he photographed ever more in the streets of Paris.

The 1950s were Doisneau's peak but the 1960s were his wilderness years. In the 1970s Europe began to change and editors looked for new reportage that would show the sense of a new social era. All over Europe, the old-style picture magazines were closing as television got the public's attention. Doisneau continued to work, producing children's books, advertising photography and celebrity portraits including Alberto Giacometti, Jean Cocteau, Fernand Léger, Georges Braque and Pablo Picasso.

Doisneau worked with writers and poets such as Blaise Cendrars and Jacques Prevert, and he credited Prevert with giving him the confidence to photograph the everyday street scenes that most people simply ignored.[1]

Group XV was established in 1946 in Paris to promote photography as art and drawing attention to the preservation of French photographic heritage. Doisneau joined the Group in 1950 and participated alongside Rene-Jacques, Willy Ronis and Pierre Jahan.

In 1950 he created his most recognizable work for Life - Le baiser de l'hôtel de ville (Kiss by the Hôtel de Ville), a photo of a couple kissing in the busy streets of Paris,[8] which became an internationally recognised symbol of young love in Paris. The identity of the couple remained a mystery until 1992.[9]

Jean and Denise Lavergne erroneously believed themselves to be the couple in The Kiss, and when Robert and Annette met them for lunch in the 1980s he "did not want to shatter their dream" so he said nothing. This resulted in them taking him to court for "taking their picture without their knowledge", because under French law an individual owns the rights to their own likeness. The court action forced Doisneau to reveal that he posed the shot using Françoise Delbart and Jacques Carteaud, lovers whom he had just seen kissing but had not initially photographed because of his natural reserve, but he approached them and asked if they would repeat le baiser. He won the court case against the Lavergnes.[1][3][10][11]

The couple in Le baiser were Françoise Delbart,[12] 20, and Jacques Carteaud, 23, both aspiring actors. In 2005 Françoise Bornet (née Delbart) stated that "He told us we were charming, and asked if we could kiss again for the camera. We didn't mind. We were used to kissing. We were doing it all the time then, it was delicious. Monsieur Doisneau was adorable, very low key, very relaxed." They posed at the Place de la Concorde, the Rue de Rivoli and finally the Hôtel de Ville. The photograph was published in the June 12, 1950, issue of Life.[11] The relationship between Delbart and Carteaud only lasted for nine months.[10] Delbart continued her acting career, but Carteaud gave up acting to become a wine producer.[9]

In 1950 Françoise Bornet was given an original print of the photo, bearing Doisneau's signature and stamp, as part of the payment for her "work", and thus her subsequent attempt at litigation in the 1990s was rejected by the court.[3][9] In April 2005 she sold the print at auction for 155,000€ to an unidentified Swiss collector via the Paris auctioneers Artcurial Briest-Poulain-Le Fur.[3][9][13]

In 1936 Doisneau married Pierrette Chaumaison whom he had met in 1934 when she was cycling through a village where he was on holiday. They had two daughters, Annette (b.1942) and Francine (b.1947). Annette worked as his assistant from 1979 until his death.[3]

Doisneau was in many ways a shy and humble man, like his photography, still delivering his own work at the height of his fame. He chastised Francine for charging an 'indecent' daily fee of £2,000 for his work on a beer advertising campaign – he wanted only the rate of an "artisan photographer".[3]

He lived in southern Paris (Gentilly, Val-de-Marne, Montrouge and 13th arrondissement of Paris) throughout his life and died in 1994. He is buried in the cemetery at Raizeux beside his wife Pierrette. 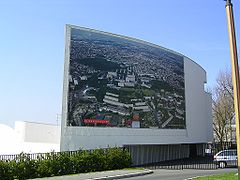 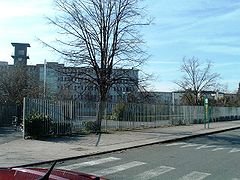 Robert Doisneau was appointed a Chevalier of the Order of the Légion d'honneur in 1984.[1]

He won several awards throughout his life, including:

In 1992 the French actress and producer Sabine Azéma made the film Bonjour Monsieur Doisneau.

The Maison de la photographie Robert Doisneau in Gentilly, Val-de-Marne, is a photographic gallery named in his honour.

In honour of his photography of children's street culture, there are several 'Ecole Primaire' (Primary Schools) named after him. An example is at Véretz (Indre-et-Loire).

The photography of Robert Doisneau has had a revival since his death in 1994. Many of his portraits and photos of Paris from the end of World War II through the 1950s have been turned into calendars and postcards and have become icons of French life.