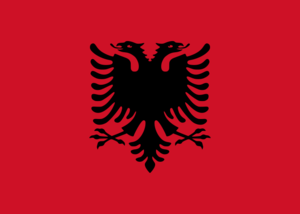 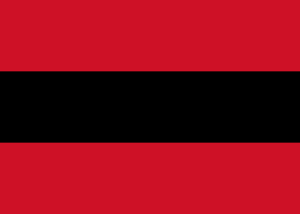 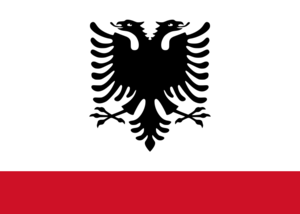 Use3 = 000001
Proportion3 = 2:3
Design3 = A silhouette of an open-winged bicephalated eagle on a white field with a wide horizontal red stripe below.
Type = NationalThe national flag of is a red flag with a black in the center. It is the only red and black flag of a recognized sovereign state. It is claimed to be derived from the similar seal of , a 15th century Albanian who led the revolt against the that resulted in brief independence for some regions of Albania from 1443 to 1478. The current flag was officially adopted on , , but previous Albanian states such as the and the post-war communist state had used much the same flag, with the former sporting the "" above the eagle and the latter a red star with a yellow rim.

The National Assembly of Vlora which proclaimed Albanian Independence on approved the flag as a symbol of the Albanian nation.

The National Eldery of which created the government of Muslim Albania in 1914 approved the flag of Esat Pasha as the symbol of Albania, whereas the Muslim Albanians who created their parallel government until 1915 used their old Ottoman flag as their symbol.

The horizontal open-winged eagle symbolises the lack of submission of the highland Albanians to foreign conquest. The communist regime added a yellow five-pointed star to the flag, which was removed by the first Albanian pluralist parliament in 1992 after the communist collapse.

Albania's and , both are different from the national flag. The civil ensign consists of three horizontal bands of red, black, and red. The naval ensign is similar to the national flag, except that the eagle is on a white field, and the lower portion of the flag has a red stripe.

The flag of Albania may be the inspiration for the flag of the fictional nation of in 's "Tintin" comics. It also influenced the revival of the Navarrese "".

The presidential flag of , which is ethnically largely Albanian, is also based on the flag of Albania.

The main theory suggests that used the double-headed eagle on his seals, hence the modern flag [ [http://www.fotw.us/flags/al.html#ori Flags Of The World, Albania] ] . Although the flag of Albania is very similar to the flag due to its ties to the ancient empire (much like any country in Eastern Europe), in Albania the symbol of the bicephalous eagle has acquired another interpretation by communists. It refers to the territory of Albania as the crossroads between eastern and western cultures and the unity of its peoples despite religious cleavages. Whereas the Serbs, for example created their medieval empire of , or Modern Greece, whose nationalist program borrowed heavily from Byzantine tradition Albania possesses a four-fold confessional divide and was forced by the Habsburgs to maintain a laic identity. Similarly, although unsubstantiated, the name may refer to the mountainous territory of the country, and the inhabitants of this territory.