Minimum wage in the United States

Minimum wage in the United States 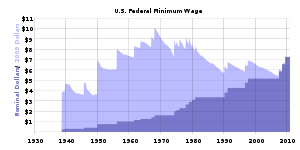 History of the federal minimum wage in real and nominal dollars.

The July 24, 2009 increase was the last of three steps of the Fair Minimum Wage Act of 2007. The wage increase was signed into law on May 25, 2007 as a rider to the U.S. Troop Readiness, Veterans' Care, Katrina Recovery, and Iraq Accountability Appropriations Act, 2007. The bill also contains almost $5 billion in tax cuts for small businesses.

In 1912, Massachusetts organized a commission to recommend non-compulsory minimum wages for women and children. Within eight years, at least thirteen U.S. states and the District of Columbia would pass minimum wage laws.[2] The Lochner era United States Supreme Court consistently invalidated compulsory minimum wage laws. Such laws, said the court, were unconstitutional for interfering with the ability of employers to freely negotiate appropriate wage contracts with employees.[3]

The first attempt at establishing a national minimum wage came in 1933, when a $0.25 per hour standard was set as part of the National Industrial Recovery Act. However, in the 1935 court case Schechter Poultry Corp. v. United States (295 U.S. 495), the United States Supreme Court declared the act unconstitutional, and the minimum wage was abolished. 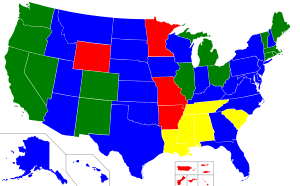 Congress then gave states the power to set their minimum wages above the federal level. As of July 1, 2010 (2010 -07-01)[update], fourteen states had done so.[4] Some government entities, such as counties and cities, observe minimum wages that are higher than the state as a whole. One notable example of this is Santa Fe, New Mexico, whose $9.50 per hour minimum wage was the highest in the nation,[5][6][7] until San Francisco increased its minimum wage to $9.79 in 2009.[8] Another device to increase wages, living wage ordinances, generally apply only to businesses that are under contract to the local government itself.

On November 7, 2006, voters in six states (Arizona, Colorado, Missouri, Montana, Nevada, and Ohio) approved statewide increases in the state minimum wage. The amounts of these increases ranged from $1 to $1.70 per hour and all increases are designed to annually index to inflation.[9]

Some politicians in the United States advocate linking the minimum wage to the Consumer Price Index, thereby increasing the wage automatically each year based on increases to the Consumer Price Index. So far, Ohio, Oregon, Missouri, Vermont and Washington have linked their minimum wages to the consumer price index. Minimum wage indexing also takes place each year in Florida, San Francisco, California, and Santa Fe, New Mexico.

Minimum wage jobs rarely include health insurance coverage,[10][11] although that is changing in some parts of the United States where the cost of living is high, such as California.[citation needed]

According to a paper by Fuller and Geide-Stevenson, 45.6% of American economists in the year 2000 agreed that a minimum wage increases unemployment among unskilled and young workers, while 27.9% agree with this statement but with provisos.[12] As a policy question in 2006, the minimum wage has—to some extent—split the economics profession with just under half believing it should be eliminated and a slightly smaller percentage believing it should be increased, leaving rather few in the middle.

Some idea of the empirical problems of this debate can be seen by looking at recent trends in the United States. The minimum wage fell about 29% in real terms between 1979 and 2003. For the median worker, real hourly earnings have increased since 1979; however, for the lowest deciles, there have been significant decreases in the real wage without much decrease in the rate of unemployment. Some argue that a declining minimum wage might reduce youth unemployment (since these workers are likely to have fewer skills than older workers).[13]

Overall, there is no consensus between economists about the effects of minimum wages on youth employment, although empirical evidence suggests that this group is most vulnerable to high minimum wages.[14]

Classical economics argues that the demand for labor increases as the price of labor falls. Each firm must evaluate the potential to make a profit from each worker hired; if the workers cost less, then more profit can be made from hiring more workers at a lower price. Therefore, by setting a lower boundary to wages, a minimum wage law prevents firms from offering jobs below the minimum and increases unemployment.

Investment, in its turn, depends upon consumption, and consumption depends upon the marginal propensity to consume (savings rate) across all income categories. In an "underconsumption" scenario, the transfer of income from entrepreneurs and rentiers (those with higher incomes) to the working class (via union wage agreements and minimum wages) can actually lead to an increase in total consumption and higher demand for goods--leading to increased employment. However, the resulting higher price levels may spur several forms of political and institutional responses that blunt or negate this tendency. For one, inflation tends to transfer income from bond holders (rentiers) to wage earners. For another, entrepreneurs may, under conditions of oligopoly be able to blunt the effect of rising wages by using their market power to raise prices fast enough to prevent real gains among workers. And finally, the central bank may intervene to defend price levels by increasing interest rates, which will tend to curb investment and decrease the demand for labor.

Without choosing from among these perspectives, it is sufficient to say that minimum wage increases are unlikely to have a simple linear effect on employment. The interconnection of price levels, central bank policy, wage agreements, total aggregate demand creates a situation where the conclusions to be drawn from macroeconomic analysis will be highly influenced by the underlying assumptions.[15]

Jobs affected by the minimum wage

The jobs that are most likely to be directly affected by the Minimum Wage are the ones that pay a wage close to the minimum.

According to the May 2006 National Occupational Employment and Wage Estimates,[16] the four lowest-paid occupational sectors in May 2006 (when the Federal Minimum Wage was $5.15 per hour) were the following:

Two years later, in May 2008, when the Federal Minimum Wage was $5.85 per hour and was about to increase to $6.55 per hour in July 2008, these same sectors were still the lowest-paying, but their situation (according to Bureau of Labor Statistics data)[17] was:

In 2006, workers in the following 13 individual occupations received, on average, a median hourly wage of less than $8.00 per hour:

According to the May 2009 National Occupational Employment and Wage Estimates,[18] the lowest-paid occupational sectors in May 2009 (when the Federal Minimum Wage was $7.25 per hour) were the following: