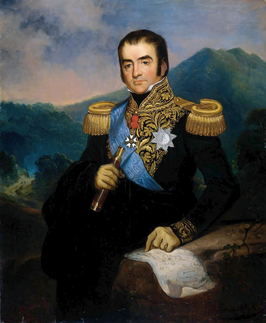 Born in Hattem, Netherlands, on the 21 October 1762, Daendels was the son of Burchard Johan Daendels, the mayoral secretary, and Josina Christina Tulleken. He studied law at the University of Harderwijk, acquiring his doctorate on 10 April 1783.

In 1785, he sided with the Patriots, who had seized power in several Dutch cities. In 1786 he defended the city of Hattem against stadholderian troops. In 1787, he defended Amsterdam against the Prussian army that invaded the Netherlands to restore William V of Orange. After William V was in power again, he fled to France because of a death sentence. Daendels was close witness to the French revolution.

He returned to the Netherlands in 1794, as a general in the French revolutionary army of general Charles Pichegru and commander of the Batavian Legion. Daendels helped unitarian politician Pieter Vreede to power in a coup d'état on 25 January 1798. The group behind Vreede was dissatisfied with the conservative-moderate majority in parliament, which tried to prevent the formulation of a more democratic, centralistic constitution. The reign of Vreede did not bring the expected results, however, and Daendels supported another coup d'état against Vreede on 14 June 1798. In the Batavian Republic Daendels occupied several political offices, but he had to step down when he failed to prevent the Anglo-Russian Invasion of Holland in 1799, and became a farmer in Heerde, Gelderland.

Governor-General of the Dutch East Indies

Louis Bonaparte made Daendels colonel-general in 1806 and Governor-General of the Dutch East Indies in 1807. After a long voyage, he arrived in the city of Batavia (now Jakarta) on 5 January 1808 and relieved the former Governor General, Albertus Wiese. His primary task was to rid the island of Java of the British Army, which he promptly achieved.[citation needed] He built new hospitals and military barracks, a new arms factories in Surabaya and Semarang, and a new military college in Batavia. He demolished the Castle in Batavia and replaced it with a new fort at Meester Cornelis (Jatinegara), and built Fort Lodewijk in Surabaya. However, his best-known achievement was the construction of the Great Post Road (Indonesian: Jalan Raya Pos) across northern Java. The road now serves as the main road in the island of Java, called Jalur Pantura. The thousand-kilometre road was completed in only one year, during which thousands of Javanese forced labourers died.[2]

He displayed a firm attitude towards the Javanese rulers, with the result that the rulers were willing to work with the British against the Dutch. He also subjected the population of Java to forced labour (Rodi). There were some rebellious actions against this, such as those in Cadas Pangeran, West Java.

There is considerable debate as to whether he increased the efficiency of the local bureaucracy and reduced corruption, although he certainly enriched himself during this period.[citation needed]

When the Kingdom of Holland was incorporated into France in 1810, Daendels returned to Holland. He was appointed a Divisional General (Major General) and commanded the 26th Division of the Grande Armée in Napoleon's invasion of Russia.

Governor-General of the Dutch Gold Coast

After the fall of Napoleon, king Willem I and the new Dutch government feared that Daendels could become an influential and powerful opposition leader and effectively banned him from the Netherlands by appointing him Governor-General of the Dutch Gold Coast (now part of Ghana). In the aftermath of the abolition of the Atlantic slave trade, Daendels tried to redevelop the rather dilapidated Dutch possessions as an African plantation colony driven by legitimate trade. Drawing on his experience from the East Indies, he came up with some very ambitious infrastructural projects, including a comprehensive road system, with a main road connecting Elmina and Kumasi in Ashanti. The Dutch government gave him a free hand and a substantial budget to implement his plans. At the same time, however, Daendels regarded his governorship as an opportunity to establish a private business monopoly in the Dutch Gold Coast.

Eventually none of the plans came to fruition, as Daendels died of malaria in the castle of St. George d'Elmina, the Dutch seat of government, on 8 May 1818. His body was interred in the central tomb at the Dutch cemetery in Elmina town. He had been in the country less than two years.