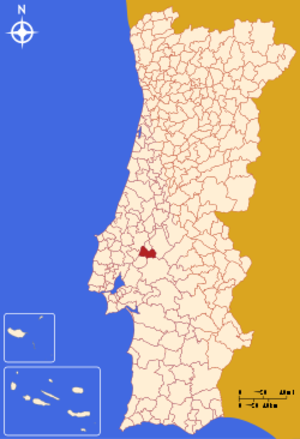 The municipality is composed of 4 parishes, and is located in the district of Santarém.

The present Mayor is José Joaquim Sousa Gomes (Socialist) and the President of the Municipal Assembly is Armindo Castelo Bento (Socialist).

The municipal holiday is .

It was in 1411 that king D. João I, Mestre de Avis, founded "Al-Meirim". Few that have travelled through the city know that such a "young" city was once a place of stay for Portuguese royals. It was elevated to the status of in the early 1980s.

The mainstay of the economy is agriculture, including wine making and modern industry of alimentary products such as fruit juices, processed tomato and canned vegetables (). The city is also known for its gastronomy, to which is just one great example.

singer is from Almeirim.