Antártica Chilena Province (Spanish: Provincia de la Antártica Chilena) is the southernmost and one of four provinces in Chile's southernmost region, Magallanes and Antártica Chilena Region (XII). The capital is Puerto Williams. The province is administratively divided into two communes (comunas): Cabo de Hornos, located at the southern tip of South America, and Antártica, a wedge-shaped claim of Antarctica, which is not internationally recognized. Its total area of 1,265,853.7 km2 (488,749 sq mi)[1] makes it almost twice as large as all other provinces of Chile combined. 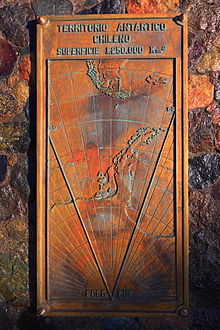 Antarctica claim by Chile, as seen on a monument in Punta Arenas

The Commune of Cabo de Hornos is recognized as part of Chile; however, the Commune of Antártica, which encompasses most of the area of the province, is disputed, as it forms the Chilean claim to Antarctica, stretching south of the 60th parallel to the South Pole.

It is practically uninhabited except for research stations of various countries, although Chile maintains a permanent civilian population at Villa Las Estrellas (near Frei Montalva Station), including women and children, a small school, and even a bank, in order to support its territorial claim of the area. The official population for the area as of the census 2002 is 130 (115 male, 15 female). This does not include the staff of non-Chilean bases in the area.[5] 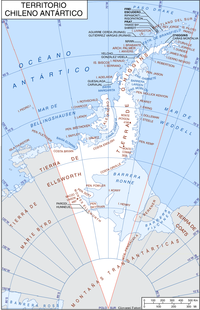 According to the Chilean argument, its claim to the Antártica Chilena Province is as old as Chile itself. The Tordesilhas Line established a west/east division of colonial territories between Portugal and Spain.[6] On the first organization of the new conquered territories, Charles V, ruler of the Spanish Empire assigned to Pedro Sancho de la Hoz control over Terra Australis, which included the Southern part of South America, Tierra del Fuego Archipelago, and all southern undiscovered territories (Terra Australis Ignota). This gobernation eventually merged with other territories in the Captaincy General of the Kingdom of Chile.

Early settlement by prehistoric man is known to have occurred from archaeological recovery within this Province. Yaghans established many settlements on the islands of the present day province of the Antártica espana Province; for example, there is a significant early Yaghan archaeological site at Wulaia Bay, which C. Michael Hogan terms the Bahia Wulaia Dome Middens.[7]

Puerto Williams and Porvenir were established in the late 19th century, mainly by Western European immigrants (esp. from British Isles, Scandinavia and the former Yugoslavia) and navigators in cruise ships and fish boats. The Chilean government transplanted thousands of Chilean settlers from the central part of the country in the 20th century to increase the province's sparse population.

In the present, the human population as well livestock and the ecosystem are the only parts of the world outside the Antarctic to report near-total ozone depletion. In the 1990s and 2000s, the Ozone hole over Antarctica has expanded into the southernmost tip of the world, and residents are advised to wear special clothing to protect their skin or stay indoors whenever possible. In certain cases once a year (the hole expands in the southern hemispheric winter but can exhibit the most UV rays in summer), human skin can burn in about five to six minutes.[citation needed]