The Northern Quoll (Dasyurus hallucatus), also known as the Northern Native Cat, the Satanellus, the North Australian Native Cat or the Njanmak (in the indigenous Mayali language), is a carnivorous marsupial mammal, native to Australia.

The Northern Quoll is a member of the family Dasyuridae, and is often stated to be the most distinctive Australian quoll. It was first described in 1842 by the famed naturalist and author John Gould, who gave it the species name hallucatus, which indicates that it has a notable first digit. This species has sometimes been placed in a separate genus, Satanellus.

There are no recognised subspecies.

The Northern Quoll is the smallest of the four Australian quoll species. Females are smaller than males with adult females weighing between 350-690g and adult males 540-1120g. Head and body length ranges from 270-370mm (adult males) to 249-310 (adult females). Tail length ranges between 202-345mm. A remarkable feature of this species is that the males show complete die-off after mating, leaving the females to raise the young alone.

Northern Quolls feed primarily on invertebrates, but also consume fleshy fruit, and a wide range of vertebrates including small mammals, birds, lizards, snakes and frogs. They also scavenge on road-kills, around campsites and in garbage tins.

The Northern Quoll occurs from the Pilbara region of Western Australia across the Northern Territory to south east Queensland. Their historical range extended uninterrupted from S.E Queensland to the Kimberleys in Western Australia [3]. There are several disjunct populations. This quoll species is most abundant in rocky ranges and open eucalypt forest. 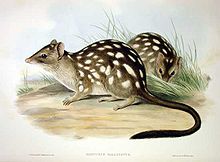 In two Kakadu study sites, quolls have become extinct at one site and declined from 45 individuals to 5 at the other site. The unconfirmed conclusion to be drawn from this is that the Northern Quoll will cease to exist in most areas in the Top End of the Northern Territory once the toad population completely overlaps the Northern Quolls range. There are remnant populations of Northern Quolls still persisting in Queensland where toads have been present for many years. Scientists do not yet understand the mechanism for their persistence; some will focus on this area in future research.

To help protect northern quolls against cane toads a University of Sydney project, revealed in 2010, is teaching them to avoid eating the invasive amphibians through taste aversion.[4]