This page details the history of the club. For information on seasons and results see New Zealand Knights seasons 2005-06 and 2006-07

New Zealand Knights Football Club (known as Football Kingz Football Club until 2004) were the only professional football club in New Zealand before they became defunct. Based in Auckland, New Zealand, they played in the Hyundai A-League, Australia's premier football competition and have since been replaced by the Wellington Phoenix.

Football Kingz FC (promoted as Auckland Kingz within Australia) joined the Australian National Soccer League in 1999 and proceeded to play in the last five seasons of the NSL, failing to qualify for the playoffs in every season. The club was originally to use the spelling of "Kings", however this was changed to the Kingz after receiving legal threats from another Australian sporting franchise.

Their inaugural coach was OFC Player of the Century and former New Zealand international Wynton Rufer in a player-coach role, with his brother Shane as assistant coach. These two seasons were the most successful for the club, both resulting in eighth placings. However after those two seasons, the owners fired Wynton Rufer as coach but still wanted him to remain as a player. Rufer's desire, however, was to remain as coach and to retire slowly as a player. Once it was clear that Rufer was not to be a coach, Rufer immediately retired from playing.

Football Kingz then had a name change into New Zealand Knights as a new restructured franchise for Australia's new national football competition called the Hyundai A-League. Market research carried out by the club, to determine the viability of a new identity for the team, indicated that 76% of respondents were in favour of a name change. When that research was focused on those aged 35 and under, the percentage in favour of a change rose to 90%. Further to that, the name of "Knights" were polled best of all names suggested in the survey, a clear 30% higher than any other option.[1]

The only major sponsor the club had was retailer Zero's New Zealand (Sub Sandwiches). They agreed to a deal with the Knights over the first three seasons in a six figure deal as a sleeve sponsor.[4]

New Zealand Knights was confirmed as one of the eight founding teams in the Hyundai A-League.[4]John Adshead, who took the New Zealand national side, the All Whites to their first ever World Cup finals appearance in 1982 was named their inaugural manager/coach.[1] former New Zealand international, Danny Hay, who previously played in the English Premiership with Leeds United was named the inaugural captain of the team.

Despite having a squad boasting several players with extensive experience in English football, many pundits did not rate the Knights as serious contenders for the A-League title, and they were considered favourites for the wooden spoon. These predictions turned out to be true, with New Zealand Knights proving to be well out of their depth in their debut A-League season.

In April 2006, after the poor season, manager John Adshead resigned from the club.[5] Paul Nevin was confirmed as manager a month later,[6] having worked as caretaker manager since the position was vacated by Adshead.

In late October 2006, as a result of low crowd attendance at North Harbour Stadium in Auckland and continual poor on-field performances, rumours began to circulate that Football Federation Australia (FFA) was considering the possibility of revoking the Knights' A-League licence and granting it to a new team that would be set to enter the competition in the 2007-08 season.

On 15 November and nearing the end of the November transfer window New Zealand Knights board and management decided to relieve Paul Nevin of his coaching duties due to a string of poor performances.[7]

On 13 December 2006, strong rumours resurfaced that the FFA was considering the revocation of the Knights' licence to compete in the A-League. It quickly became clear that, with five weeks remaining in the current season, the FFA fully intended to reclaim the licence from the Knights.[8] The FFA had continued to express angst at low attendance numbers, poor on-field performance and the lack of domestically developed players.

Late on 14 December, the FFA announced that it had revoked the competition licence held by the Knights' owners. An arrangement with NZ Soccer would see the national body step in to manage the club for the remaining five weeks of the regular season, with former All Whites player Ricki Herbert to fill the role of Head Coach.[9]

Effectively, the Knights dissolved on 21 January, when the final match of the season was played against Perth Glory FC.

On 19 March 2007 after several delays,[10] Wellington Phoenix was selected as the successor to the New Zealand Knights.[11] 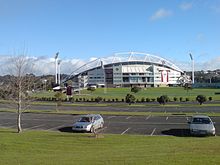 The stadium from the south-east.

North Harbour Stadium is a rectangular stadium situated in Albany on Auckland's North Shore in New Zealand. It was opened in 1997 after nearly a decade of discussion, planning and construction.

The stadium is lit with four 45 m tall light towers.

The Knights played in all-black strips, with a silver left sleeve. The change strip was white, with black shorts and white socks.

The badge was designed for the inaugural 2005-06 season and launched at the January 2005 press conference which highlighted the club name change.[1]

The New Zealand Knights supporter base was known as Bloc 5.