Flagellate
Not to be confused with flagellation. 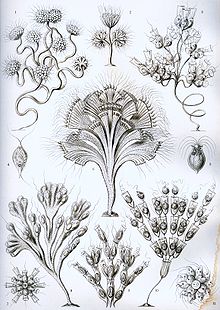 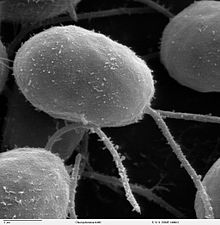 Flagellates are organisms with one or more whip-like organelles called flagella. Some cells in animals may be flagellate, for instance the spermatozoa of most phyla. Flowering plants do not produce flagellate cells, but ferns, mosses, green algae, some gymnosperms and other closely related plants do. Likewise, most fungi do not produce cells with flagellae, but the primitive fungal chytrids do. Many protists take the form of single-celled flagellates.

The word flagellate describe a particular construction of eukaryotic organism and its means of motion. The term does not imply any specific relationship or classification of the organisms that possess flagellae. However, the term "flagellate" is included in other terms (such as "dinoflagellate" and "zooflagellate") which often are more formally characterized.[1]

Eukaryotic flagella are supported by microtubules in a characteristic arrangement, with nine fused pairs surrounding two central singlets. These arise from a basal body or kinetosome, with microtubule roots that are an important part of the cell's brain. In some, for instance, they support a cytostome or mouth, where food is ingested. The flagella often supports hairs, called mastigonemes, or contain rods. Their ultrastructure plays an important role in classifying eukaryotes.

In protoctists and microscopic animals, flagella are generally used for propulsion. They may also be used to create a current that brings in food. In most things, one or more flagella are located at or near the anterior of the cell e.g. Euglena. Often there is one directed forwards and one trailing behind. Among animals, fungi, and Choanozoa, which make up a group called the opisthokonts, there is a single posterior flagellum. They are from the phylum Mastigophora. They can cause diseases and they can make their own food. They reproduce by binary fission.