The subthalamic nucleus is a small lens-shaped nucleus in the brain where it is, from a functional point of view, part of the basal ganglia system. Anatomically, it is the major part of subthalamus. As suggested by its name, the subthalamic nucleus is located ventral to the thalamus. It is also dorsal to the substantia nigra and medial to the internal capsule. It was first described by Jules Bernard Luys in 1865,[1] and the term corpus Luysi or Luys' body is still sometimes used.

The principal type of neuron found in the subthalamic nucleus has rather long sparsely spiny dendrites.[2][3] The dendritic arborizations are ellipsoid, replicating in smaller dimension the shape of the nucleus.[4] The dimensions of these arborizations (1200,600 and 300 μm) are similar across many species—including rat, cat, monkey and man—which is unusual. However, the number of neurons increases with brain size as well as the external dimensions of the nucleus. The principal neurons are glutamatergic, which give them a particular functional position in the basal ganglia system. In humans there are also a small number (about 7.5%) of GABAergic interneurons that participate in the local circuitry; however, the dendritic arborizations of subthalamic neurons shy away from the border and majorly interact with one another.[5]

The axons of subthalamic nucleus neurons leave the nucleus dorsally. The efferent axons are glutamatergic (excitatory). Except for the connection to the striatum (17.3% in macaques), most of the subthalamic principal neurons are multitargets and directed to the other elements of the core of the basal ganglia.[8] Some send axons to the substantia nigra medially and to the medial and lateral nuclei of the pallidum laterally (3-target, 21.3%). Some are 2-target with the lateral pallidum and the substantia nigra (2.7%) or the lateral pallidum and the medial (48%). Less are single target for the lateral pallidum. In the pallidum, subthalamic terminals end in bands parallel to the pallidal border.[9][10] When all axons reaching this target are added, the main afference of the subthalamic nucleus is, in 82.7% of the cases, clearly the medial pallidum (internal segment of the globus pallidus).

Some researchers have reported internal axon collaterals.[11] However, there is little functional evidence for this. 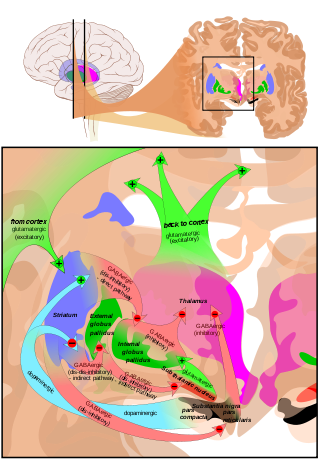 The first intracellular electrical recordings of subthalamic neurons were performed using sharp electrodes in a rat slice preparation.[citation needed] In these recordings three key observations were made, all three of which have dominated subsequent reports of subthalamic firing properties. The first observation was that, in the absence of current injection or synaptic stimulation, the majority of cells were spontaneously firing. The second observation is that these cells are capable of transiently firing at very high frequencies. The third observation concerns non-linear behaviors when cells are transiently depolarized after being hyperpolarized below –65mV. They are then able to engage voltage-gated calcium and sodium currents to fire bursts of action potentials.

Several recent studies have focused on the autonomous pacemaking ability of subthalamic neurons. These cells are often referred to as "fast-spiking pacemakers",[12] since they can generate spontaneous action potentials at rates of 80 to 90 Hz in primates.

Strong reciprocal connections link the subthalamic nucleus and the external segment of the globus pallidus. Both are fast-spiking pacemakers. Together, they are thought to constitute the "central pacemaker of the basal ganglia"[13] with synchronous bursts.

The connection of the lateral pallidum with the subthalamic nucleus is also the one in the basal ganglia system where the reduction between emitter/receiving elements is likely the strongest. In terms of volume, in humans, the lateral pallidum measures 808 mm³, the subthalamic nucleus only 158 mm³.[14] This translated in numbers of neurons represents a strong compression with loss of map precision.

The lateropallido-subthalamic system is thought to play a key role in the generation of the patterns of activity seen in Parkinson's disease.[17]

Chronic stimulation of the STN, called deep brain stimulation (DBS), is used to treat patients with Parkinson disease. The first to be stimulated are the terminal arborisations of afferent axons which modifies the activity of subthalamic neurons. However, it has been shown in thalamic slices from mice,[18] that the stimulus also causes nearby astrocytes to release Adenosine Triphosphate (ATP), a precursor to adenosine (through a catabolic process). In turn, adenosine A1 receptor activation depresses excitatory transmission in the thalamus, thus mimicking ablation of the subthalamic nucleus.

Unilateral destruction or disruption of the subthalamic nucleus – which can commonly occur via a small vessel stroke in patients with diabetes, hypertension, or a history of smoking – produces hemiballismus.

The function of the STN is unknown, but current theories place it as a component of the basal ganglia control system which may perform action selection. STN dysfunction has also been shown to increase impulsivity in individuals presented with two equally rewarding stimuli.[19]