Hemispherical photography, also known as fisheye or canopy photography, is a technique to estimate and characterize plant canopy geometry using photographs taken looking upward through an extreme wide-angle lens (Rich 1990). Typically, the viewing angle approaches or equals 180-degrees, such that all sky directions are simultaneously visible. The resulting photographs record the geometry of visible sky, or conversely the geometry of sky obstruction by plant canopies or other near-ground features. This geometry can be measured precisely and used to calculate solar radiation transmitted through (or intercepted by) plant canopies, as well as to estimate aspects of canopy structure such as . Detailed treatments of field and analytical methodology have been provided by Paul Rich (1989, 1990) and Robert Pearcy (1989).

The hemispherical lens (also known as a fisheye or whole-sky lens) was originally designed by Robin Hill (1924) to view the entire sky for meteorological studies of cloud formation. Foresters and ecologists conceived of using photographic techniques to study the light environment in forests by examining the canopy geometry. In particular, Evans and Coombe (1959) estimated sunlight penetration through forest canopy openings by overlaying diagrams of the sun track on hemispherical photographs. Later, Margaret Anderson (1964, 1971) provided a thorough theoretical treatment for calculating the transmission of direct and diffuse components of solar radiation through canopy openings using hemispherical photographs. At that time hemispherical photograph analysis required tedious manual scoring of overlays of sky quadrants and the track of the sun. With the advent of personal computer, researchers developed digital techniques for rapid analysis of hemispherical photographs (Chazdon and Field 1987, Rich 1988, 1989, 1990, Becker et al. 1989). In recent years, researchers have started using digital cameras in favor of film cameras, and algorithms are being developed for automated image classification and analysis. Various commercial software programs have become available for hemispherical photograph analysis, and the technique has been applied for diverse uses in , , , and . 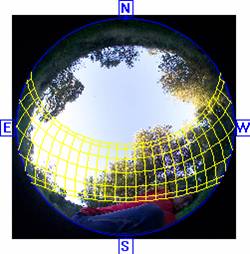 thumb|250px|none|Hemispherical photograph from an open canopy reach of San Francisquito Creek. Overlay of the sunpath enables calculation of solar exposure as it influences water temperature.(photo by S.B. Weiss).

These calculations require theoretical or empirical distributions of direct and diffuse radiation in the open, without canopy or other sky obstruction. Usually calculations are performed for either (400-700 nanometers) or integrated over all wavelengths, measured in kilowatt-hours per square meter (kW h/m2).

The fundamental assumption is that most solar radiation originates from visible (unobscured) sky directions, a strong first order effect, and that reflected radiation from the canopy or other near-ground features (non-visible or obscured sky directions) is negligible, a small second order effect. Another assumption is that the geometry of visible (non-obscured) sky does not change over the period for which calculations are performed.

Canopy indices, such as , are based on calculation of gap fraction, the proportion of visible (non-obscured) sky as a function of sky direction. Leaf area index is typically calculated as the leaf area per unit ground area that would produce the observed gap fraction distribution, given an assumption of random leaf angle distribution, or a known leaf angle distribution and degree of clumping. For further explanation see leaf area index.

Direct Site Factor (DSF) is the proportion of direct solar radiation at a given location relative to that in the open, either integrated over time or resolved according to intervals of time of day and/or season.

Indirect Site Factor (ISF) is the proportion of diffuse solar radiation at a given location relative to that in the open, either integrated over time for all sky directions or resolved by sky sector direction.

Global Site Factor (GSF) is the proportion of global solar radiation at a given location relative to that in the open, calculated as the sum of DSF and ISF weighted by the relative contribution of direct versus diffuse components.

Upward-looking hemispherical photographs are typically acquired under uniform sky lighting, early or late in the day or under overcast conditions. Known orientation (zenith and azimuth) is essential for proper registration with the analysis hemispherical coordinate system. Even lighting is essential for accurate image classification. A self-leveling mount (gimbals) can facilitate acquisition by ensuring that the camera is oriented to point straight up toward the zenith. The camera is typically oriented such that north (absolute or magnetic) is oriented toward the top of the photograph.

When images are acquired from locations with large differences in openness (for example, closed canopy locations and canopy gaps) it is essential to control camera exposure. If the camera is allowed to automatically adjust exposure (which is controlled by aperture and shutter speed), the result is that small openings in closed conditions will be bright, whereas openings of the same size in open conditions will be darker (for example, canopy areas around a gap). This means that during image analysis the same sized holes will be interpreted as "sky" in a closed-canopy image and "canopy" in the open-canopy image. Without controlling exposure, the real differences between closed- and open-canopy conditions will be under-estimated.

Photograph registration involves aligning the photographs with the hemispherical coordinate system used for analysis, in terms of translation (centering), size (coincidence of photograph edges and horizon in coordinate system), and rotation (azimuthal alignment with respect to compass directions).

Photograph classification involves determining which image represent visible (non-obscured) versus non-visible (obscured) sky directions. Typically this has been accomplished using interactive thresholding, whereby an appropriate threshold is selected to best match a binary classification with observed sky visibility, with pixel intensity values above the threshold classified as visible and pixel intensity values below the threshold classified as non-visible. Recently advances have been made in developing automatic threshold algorithms, however more work is still needed before these are fully reliable.

Anderson, M.C. 1964. Studies of the woodland light climate I. The photographic computation of light condition. "Journal of Ecology" 52:27-41.

Bonhomme, R., C. Varlet Granger, and P. Chartier. 1974. The use of hemispherical photographs for determining the leaf area index of young crops. "Photosynthetica" 8:299-301.

Reifsnyder, W.E. 1967. Radiation geometry in the measurement and interpretation of radiation balance. "Agricultural and Forest Meteorology" 4:255-265.