Temple of the Dog (album)

Temple of the Dog (album) 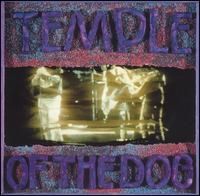 "Temple of the Dog" is the only album by the American rock band , released on April 16, 1991 through . The album is a tribute to , the former lead singer of and . Wood died on March 19, 1990 of a heroin overdose. The album has been certified Platinum in the United States.

frontman , who had been vocalist 's roommate, approached former Mother Love Bone members and about working on material he had written when he was on tour with Soundgarden in Europe.

The recording sessions took place from November 1990 to December 1990 at London Bridge Studios, in , . The album was recorded in only 15 days. The group worked with producer . Two songs on the album, "Reach Down" and "Say Hello 2 Heaven", were written in response to Wood's death, while other songs on the album were written by Cornell on tour prior to Wood's death or re-worked from existing material from demos written by Gossard and Ament.

This was the first recording studio experience for McCready and Vedder. Regarding McCready, Cornell said, "You almost kind of had to yell at him to get him to realize that in the five-and-a-half minute solo of "Reach Down", that was his time and that he wasn't going to be stepping on anybody else."

The recorded material was slow and melodic; much different musically from the aggressive Cornell had been doing with Soundgarden. Steve Huey of said that the "record sounds like a bridge between Mother Love Bone's theatrical '70s-rock updates and Pearl Jam's hard-rocking seriousness...Keeping in mind that Soundgarden's previous album was the overblown metallic miasma of "Louder than Love", the accessibly warm, relatively clean sound of "Temple of the Dog" is somewhat shocking, and its mellower moments are minor revelations in terms of Cornell's songwriting abilities." [Huey, Steve. [http://www.allmusic.com/cg/amg.dll?p=amg&sql=A2b1uak5k5m3n "Temple of the Dog"] . .]

All of the lyrics on the album were written solely by Cornell. "Say Hello 2 Heaven" and "Reach Down" were written by Cornell in direct response to Andrew Wood's death. Lyrically, the rest of the songs on the album cover a variety of topics. Cornell stated that the lyrics for "Hunger Strike" express "somewhat of a political, socialist statement." [cite web | url=http://seattlepi.nwsource.com/pop/244643_cornelltranscript.html | title=Transcript of exclusive P-I interview with Chris Cornell | accessdate=2008-07-23 | author=Hay, Travis | publisher="" | date=2005-10-15]

"Temple of the Dog" was released on April 16, 1991 through and initially sold 70,000copies in the . The album received favorable reviews, [cite web|title=((( Temple of the Dog > Biography )))|author=Erlewine, Stephen Thomas|publisher=|url=http://wc10.allmusic.com/cg/amg.dll?p=amg&sql=11:dpfyxqt5ld6e~T1|accessdate=2007-10-03] but failed to chart. The album received new attention in the summer of 1992. Both Soundgarden and Pearl Jam had risen to mainstream attention in the months since the album's release and A&M decided to re-issue the album and promote "Hunger Strike" as a single, with an accompanying . The attention allowed both the album and single to chart on "Billboard", and resulted in a boost in album sales. [ [http://www.ew.com/ew/article/0,,311271,00.html "In the Temple of Pearlgarden"] . "". July 31, 1992.] "Temple of the Dog" ended up selling more than 1,000,000copies, achieving Platinum status. [cite web|title=Gold & Platinum Searchable Database — Search Results — Temple of the Dog|publisher=|url=http://www.riaa.com/goldandplatinumdata.php?resultpage=1&table=SEARCH_RESULTS&action=&title=&artist=Temple%20of%20the%20Dog&format=&debutLP=&category=&sex=&releaseDate=&requestNo=&type=&level=&label=&company=&certificationDate=&awardDescription=&catalogNo=&aSex=&rec_id=&charField=&gold=&platinum=&multiPlat=&level2=&certDate=&album=&id=&after=&before=&startMonth=1&endMonth=1&startYear=1958&endYear=2007&sort=Artist&perPage=25|accessdate=2007-10-03]

of "" said, "For "Hunger Strike" and "Reach Down" alone, "Temple of the Dog" deserves immortality; those songs are proof that the angst that defined Seattle rock in the 1990s was not cheap sentiment, at least in the beginning. And you can't help but love the irony of an album, made in great sadness, kick-starting the last great pop mutiny of the twentieth century." [Fricke, David. [http://www.rollingstone.com/artists/templeofthedog/albums/album/301499/review/5944099/temple_of_the_dog "Temple of the Dog: "Temple of the Dog"] . "". December 14, 2000.]

The name "Temple of the Dog" comes from the lyrics of the Mother Love Bone song, "Man of Golden Words". The lyric from which the name derives is "Seems I've been living in the temple of the dog".