The Ottawa municipal election was contested on October 25, 2010 to elect the mayor of Ottawa, Ottawa City Council and the Ottawa-Carleton Public and Catholic School Boards. The election was held on the same date as elections in every other municipality in Ontario.

In Ottawa's 2006 municipal election, newcomer Larry O'Brien defeated former city councillor Alex Munter and then-incumbent Bob Chiarelli in an election largely based on the expansion of Ottawa's light rail transit system. A Léger Marketing poll published by the Ottawa Sun on May 26, 2007 put O'Brien's approval ratings at 24%, and stated that if an election were held today, both he and Munter would be tied with 35% of the vote.[1]

Terry Kilrea, who had dropped out of the previous mayoral race on August 30, 2006, accused O'Brien of offering him up to $30,000 and a political appointment if Kilrea would withdraw from that race and support O'Brien.[2] On August 5, 2009, Larry O'Brien was acquitted of bribery charges stemming from this accusation.[3]

Alex Munter, the second-place candidate in 2006, has stated that he does not intend to run in the 2010 election.[citation needed] Bob Chiarelli, mayor from 1997–2006, was elected in a March 2010 by-election to the Legislative Assembly of Ontario, replacing another former mayor, Jim Watson, who left the legislative seat to run in the 2010 mayoral race.[4]

On June 30, O'Brien announced that he would seek another term as mayor.[5]

An Ottawa Citizen poll conducted in June 2010 showed public transit to the most important policy issue among city voters, ahead of taxes and the Lansdowne Park redevelopment.[6]

The race featured the largest number of candidates for mayor and for city council in the history of Ottawa.

Turnout for the election was 44%[2], down 10% from 2006. The election saw seven incumbents go down to defeat (including the mayor). Except for mayor, the city has not seen an incumbent councillor lose since amalgamation.

Watson won nearly half of the votes. His strongest wards were in the city's East end, despite having never represented the area in his political life (except as mayor). His highest vote percentage was in Rideau-Vanier Ward. Watson's worst wards were the three rural wards which were the only three wards he lost. His worst ward was West Carleton-March Ward.

O'Brien received about one quarter of the votes in the city. He won just three wards, in Ottawa's rural areas. The suburbs did not vote for him the way they did in 2006, and his worst areas were again in central Ottawa. Doucet's strongest ward was Capital Ward, the ward he represented on council. He was unable to win it however, losing to Watson who also represented the Ward in the 1990s. Doucet's strength was in the central part of the city, and his worst areas were the rural areas. Haydon finished fourth in the race. His strongest areas in the rural parts of the city, as well as in Nepean, a city he was once mayor. He did not perform well in his home ward however, of Gloucester-South Nepean. His worst areas were in the central part of the city.

Bello, 46, was a businessperson who has lived in Ottawa for 20 years. He holds a Ph.D. in Social Anthropology. He was the organizing chair of the Green Party of Canada. [3] He was the owner and director of Mundo en Espanol', a Spanish language newspaper in the Ottawa-Gatineau area.

Ben-Tahir, 71 was born in India. He moved to Canada in 1960, and is an information scientist. He once worked for the public service. He lives in Somerset Ward. In 2006, he ran for the Conservative Party of Canada nomination in Ottawa Centre, but lost. He ran for city council in 2006 in Somerset Ward that year as well and lost.

Doucet, 64, was the city councillor for Capital Ward. He represented Capital Ward on the Ottawa-Carleton Regional Council from 1997 to 2000 and on Ottawa City Council since 2000. Along with Bob Chiarelli, he spearheaded the development of Ottawa's O-Train. Doucet graduated from the University of Toronto, receiving a B.A. in Urban Anthropology. He received a Masters Degree in the same field from the Université de Montréal. Before being elected, he served as a public servant both on a provincial and federal level. He has lived in Ottawa since 1972, and is also an accomplished writer.[4] Doucet has, in the past, been associated with progressive initiatives at the municipal level and has worked across party lines with other levels of government to further regional interests. [5] [6] [7] [8] He was endorsed by the New Democratic Party while running for City Council. [9][10][11]

Furtenbacher, 50 was a polymathic macroethicist. He was formerly a band player and is now on provincial disability, because, as he puts it, he is 'unethically challenged'.

Gauthier, 73, publishes a small local newspaper and is in construction. He is a perennial candidate for office. He ran for mayor in 1997, coming in second with 12.1% of the vote. He ran as an independent in the 2003 provincial election in Ottawa West—Nepean, receiving 0.4% of the vote. He also ran as an independent in the 2004 federal election in Ottawa Centre, receiving 0.2% of the vote. Although he indicated his intention to withdraw, Gauthier remained on the official list of nominees.[8]

Haydon, 77, was a former regional Chair for the Ottawa-Carleton Regional Council from 1978 to 1991 and former mayor for the City of Nepean. He previously was candidate for Gloucester-South Nepean Ward in the 2006 election against Steve Desroches. He was also an advisor for incumbent Mayor Larry O'Brien. Hayden announced his candidacy on September 10, 2010 on the final day of registration for candidates for the election. Hayden who was one of the main actors in the creation of the Ottawa Transitway system, announced his plans for an expanded rapid-transit system without light rail but with a downtown tunnel. He also planned to reform OC Transpo management by having a group of elected representatives taking control of the transit commission. He is regarded as a fiscal Conservative, and has often criticized the spending by the current administration.[9]

Larter, 65 ran in the previous election, and received 0.2% of the vote. He was an unknown candidate who never returned phone calls, didn't show up to all-candidate debates, and the press was unable to find out who he was. There was some news when he reportedly used strong, sometimes racist language whilst emailing other candidates during the election. Larter ran in the Canadian federal election, 2008 in the riding of Ottawa—Vanier as an independent. He received 226 votes, or 0.44% (5th of 7 candidates). Larter initially dropped out of the mayor race on March 2, but entered the race once again in June. In the mean time, he registered and withdrew himself from running as city councillor in 10 different wards.

Lawrance, 53, was a visually impaired transit activist and former soldier. He ran as an independent candidate in the 1989 Quebec provincial election and later ran for mayor of Cowansville, Quebec.[10] Lawrance was once a supporter of Larry O'Brien. He was born in Scotland, and he emigrated to Canada in 1962. He served in the Canadian Armed Forces.[11] On Friday 23 October 2010, three days before the election, Lawrance was charged with assault with a weapon and assault causing bodily harm.[12]

Libweshya, 25, was born in Nairobi, Kenya, and claims to be a distant relative of Barack Obama.[citation needed] He is a musician, entrepreneur and business owner. He originally supported Jim Watson, but decided to run on his own.

Liscumb, 62, was the CEO/President of "Innovation Hub".

Lyrette, age unknown, was a licensed optician. He has been with the College of Opticians of Ontario for 42 years.

Maguire, 49, was born in Montreal, and has been living in Kars since 1966. He is a graduate of Algonquin College. In 1990 he ran for School Board Trustee. In 2003, he won the Canadian Alliance nomination for the 2004 federal election in Nepean—Carleton, but the party merged with the Progressive Conservatives, nullifying it. He is an independent management consultant and is a former public servant. He worked on both the Terry Kilrea and Larry O'Brien campaigns last election.

O'Brien, 61 was the incumbent mayor, serving from 2006. O'Brien is a graduate of Algonquin College. A businessman by trade, he only entered politics in 2006. He is the former CEO of Calian Technologies Ltd. He lives in the ByWard Market on Rideau Street and describes himself as a conservative.

No media outlet has been able to contact Mr. Pita to find out who he is.

St. Arnaud, 62, was a volunteer at a soup kitchen and church.

Scharf, 57, is a longtime political activist in Ottawa who has fought against the Safe Streets Act and other government legislation which she sees as being anti-homeless. She previously organized a tent city at City Hall and was one of the initial organizers of the Ottawa Panhandlers Union. Scharf previously ran for mayor in 2006, finishing fourth with 0.5% of the total vote.[13] She is a paralegal.

Taylor, 33 is a journalism student at Carleton University. He was raised in Westboro and lives in Old Ottawa South. He attended Lisgar Collegiate Institute and Algonquin College and has claimed to have had "about 50 jobs" over 11 years in 45 different countries. In the summer time, he drives a truck for the sound and light show on Parliament Hill. Taylor is a member of the Green Party.

Watson, 48, was previously mayor of Ottawa (1997–2000). He was first elected to provincial office in 2003, and he served in the provincial Cabinet as Liberal Minister of Consumer and Business Services (2003–2005), Minister of Health and Promotion (2005–2007), and Minister of Municipal Affairs and Housing (2007–2010). Prior to being mayor, Watson served on Ottawa City Council from 1991 to 1997, representing Capital Ward. Prior to serving on city council, he was in the public service. His first post as Mayor was cut short due to amalgamation. Between 2000 and 2003 he was a journalist. Watson has been a longtime supporter of the Liberal party. In 1996, he supported Dalton McGuinty's bid to lead the Ontario Liberals.[15] Watson lives in the Wood Park neighbourhood. While he was a city councillor, he lived in Old Ottawa South.

Wright, 25 was a resident of Ottawa's Byward Market. He grew up in Westboro and attended Notre Dame High School. Sam was an avid soccer player and can be found cheering for Premier League team Liverpool. Known by his dear friends as Sambokski, (bowski for short). He was quoted in the August 7, 2010 edition of the Ottawa Citizen as saying "I'm a young 25-year-old who loves outdoor activities and cottages"

Cullen, 58, has sat on Ottawa City Council since 2001, representing Bay Ward in Ottawa's west end. He also sat on Ottawa City Council from 1991 to 1994 representing Richmond Ward. After working as a policy analyst with the federal government, he was elected to serve as a public school trustee in 1982. After serving on city council from 1991 to 1994, he was elected exclusively to the Ottawa-Carleton Regional Council from 1994 to 1997 when he was elected to become the Liberal Member of Provincial Parliament for Ottawa West. He served until losing re-election in 1999. While in office, he crossed the floor to join the Ontario NDP. Between 1999 and 2001 he served as an executive director of the Council on Aging, a United Way agency and lobby group for seniors. Cullen dropped out on August 31, 2010, citing low funds. He will run for re-election in Bay Ward.

Pioro, 58, is a resident of Richmond. He was born in Ottawa and is a graduate of DeVry Institute of Technology. He has worked 30 years in Ottawa's high tech industry. He is a small business owner who sells items to the Canadian Forces.[23] Pioro is a Conservative.

Romolock, 21 is a native of Ottawa and would have been the youngest candidate. He is a political science student at the University of Ottawa.

Candidates who declined to run 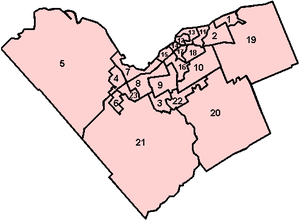 Incumbent Shad Qadri had announced his intention and filed his papers for re-election.[28]

Incumbent Gord Hunter did not run for re-election.[29]

Incumbent Jacques Legendre did not run for re-election

Incumbent Clive Doucet ran for mayor instead of the ward.

Incumbent Peggy Feltmate did not run for re-election. 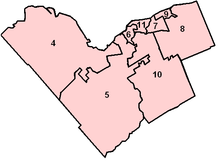 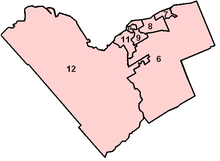