The Marbled Murrelet (Brachyramphus marmoratus) is a small seabird from the North Pacific. It is a member of the auk family. It nests in old-growth forests or on the ground at higher latitudes where trees cannot grow. Its habit of nesting in trees was suspected but not documented until a tree-climber found a chick in 1974 making it one of the last North American bird species to have its nest described. The Marbled Murrelet has experienced declines in their numbers since humans began logging their nest trees beginning in the latter half of the 19th century. The decline of the Marbled Murrelet and its association with old-growth forests have made it a flagship species in the forest preservation movement. 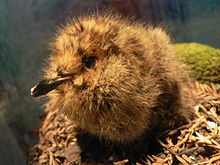 The Marbled Murrelet feeds at sea both in pelagic offshore areas (often associating with upwellings) and inshore in protected bays. It feeds principally on sandeels, also taking herring, capelin and shiner perch. The bird has not been known to wander from the Pacific coast of North America, all inland and eastern Brachyramphus records being of the closely related Long-billed Murrelet.

The nesting behaviour of the Marbled Murrelet is unusual, since unlike most alcids it does not nest in colonies on cliffs or in burrows, but on branches of old-growth and mature conifers such as Western Hemlock, Sitka Spruce, Douglas Fir and Coastal Redwood, as far as 80 km inland. It lays one egg on a platform of lichen or moss on these branches (less often on the ground). In northern populations, murrelets nest on the ground among rocks, as do other related murrelet species. The egg is incubated for a month, then fed for around 40 days until the chick is able to fledge. The chick then leaves the nest and flies unaccompanied to the sea. Breeding success is low and chick mortality high.

Marbled murrelets occur in summer from Alaska's Kenai Peninsula, Barren islands, and Aleutian islands south along the coast of North America to Point Sal, Santa Barbara County, in south-central California. Marbled murrelets winter mostly within the same general area, except that they tend to vacate the most northern sections of their range and have been recorded as far south as Imperial Beach of San Diego County, California.[1]

Marbled murrelets do not breed until they are at least 2 years old.[1] Marbled murrelets nest from mid-April to late September.[1] Peak activity occurs from mid-June to late July in California, and the second week of July to mid-August in Oregon.[4] Marbled murrelet are semicolonial in nesting habits. Two nests found in Washington were located only 150 feet (46 m) apart. Not all mature adults nest every year.[2] Marbled murrelets lay only one egg. The egg is incubated by both parents for about 30 days. Adults fly from ocean feeding areas to inland nest sites, mostly at dusk and dawn. They feed nestlings at least once and sometimes twice per day or night. Usually only one fish is carried to the young.[1][2]

Nestlings fledge in 28 days. Young marbled murrelets remain in the nest longer than other alcids and molt into their juvenile plumage before leaving the nest.[1] Fledglings fly directly from the nest to the ocean.[2]

From southeast Alaska southward, marbled murrelets use mature or old-growth forest stands near the coastline for nesting.[1][2] These forests are generally characterized by large trees (>32 inches [80 cm] diameter at breast height [d.b.h.]), a multistoried canopy, moderate to high canopy closure or an open crown canopy,[4][6] large snags, and numerous downed snags in all stages of decay.[2] Marbled murrelets tend to nest in the oldest trees in the stand.[2] In Oregon, forests begin to exhibit old-growth characteristics at about 175 to 250 years of age. Moss, on which marbled murrelets nest, forms on the limbs of Douglas-fir that are more than 150 years old.[1]

The only four marbled murrelet tree nests found before 1990 shared the following characteristics: (1) located in a large tree (>47 inches [120 cm] d.b.h.) with an open crown structure, (2) on a moss-covered limb that is camouflaged, partially shaded, and approximately horizontal with a diameter (including associated moss) of at least 14 inches (36 cm), and (3) located within the middle or lower part of a live crown.[6] However, Marshall [7] stated that because of their low aerial buoyancy marbled murrelets often nest high in the treetops or on steep slopes. Habitat must be sufficiently open to allow for easy flight.[4] All marbled murrelet nests found in Washington, Oregon, and California were located in old-growth trees that ranged from 38 inches (88 cm) d.b.h. to 210 inches (533 cm) d.b.h. with a mean of 80 inches (203 cm) d.b.h. Nests were located high above the ground and had good overhead protection but allowed easy access to the exterior forest.[2] Marbled murrelets may use the same nest in successive years.[7]

Marbled murrelets forage in the ocean near shore and in inland saltwater areas such as bays, sounds, and saltwater passageways. Some also forage on inland freshwater lakes. Flocks of 50 or more birds have been observed near freshwater lakes.[5] Subadults occur at sea throughout the summer. Marbled murrelets feed within 1,640 feet (500 m) of shore.[8]

Marbled murrelet winter habitat is the same as the nesting and foraging habitat. During the winter marbled murrelets use inland old-growth or mature sites for roosting, courtship, and investigating nest sites. The use of inland lakes during the nonbreeding season occurs in conjunction with visits to nesting areas.[5]

Marbled murrelets do not feed in large flocks as do other alcids, although loose aggregations occur in winter. While feeding during the breeding season marbled murrelets occur in pairs or as single individuals. Subadults feed singly; but in early July, when pairs of adults are still feeding young, mixed flocks begin to form.[1] Marbled murrelets feed during the day and at night.[4]

The Marbled Murrelet is considered globally endangered,[9] with some evidence of decline across its range over the last few decades. The biggest threat to the marbled murrelet was long considered to be loss of nesting habitat (old-growth and mature forests) to logging. Additional factors including high predation rates due to human disturbances and climate-driven changes in ocean conditions are also considered important now.

Scientists at Redwood National Park have established a connection between human presence in marbled murrelet territory and corvid predation of marbled murrelet chicks. Corvid populations, such as Steller's jays, crows, and ravens, are expanding into old-growth forests. Lured by food scraps left by campers and hikers, with increased access aggravated by the patchwork forests created by industrial logging, corvids more frequently discover marbled murrelet nests in areas where these predator species were not previously found.

The populations in Washington, Oregon and California were listed as threatened in 1992 by the U.S. Fish and Wildlife Service due to concerns about loss of nesting habitat, entanglement in fishing gear and oil spills. The remaining populations (Alaska and British Columbia) are currently under review. The species became a flagship species in efforts to prevent the logging of old-growth forests along the Pacific coast from California to Alaska.