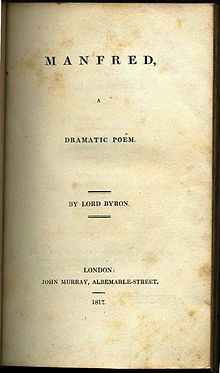 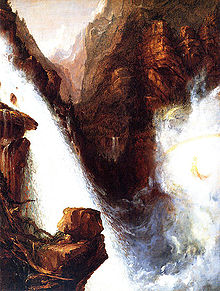 Manfred is a dramatic poem written in 1816–1817 by Lord Byron. It contains supernatural elements, in keeping with the popularity of the ghost story in England at the time. It is a typical example of a Romantic closet drama. Manfred was adapted musically by Robert Schumann in 1852, in a composition entitled Manfred: Dramatic Poem with music in Three Parts, and later by Pyotr Ilyich Tchaikovsky in his Manfred Symphony. Friedrich Nietzsche was impressed by the poem's depiction of a super-human being, and wrote some music for it. Byron wrote this "metaphysical drama", as he called it, after his marriage failed in scandal amidst charges of sexual improprieties and an incestuous affair between Byron and his half-sister, Augusta Leigh. Attacked by the press and ostracized by London society, Byron fled England for Switzerland in 1816 and never returned. Because Manfred was written immediately after this and because Manfred regards a main character tortured by his own sense of guilt for an unmentionable offense, some critics consider Manfred to be autobiographical, or even confessional.[1][2] The unnamed but forbidden nature of Manfred's relationship to Astarte is believed to represent Byron's relationship with his half-sister Augusta. Byron commenced this work in late 1816, only a few months after the famed ghost-story sessions which provided the initial impetus for Mary Shelley's Frankenstein. The supernatural references are made clear throughout the poem. In one scene, for example, (Act III, Scene IV, Interior of the Tower), Manfred recalls traveling through time (or astral projection traveling) to Caesar's palace, "and fill'd up, As 't were anew, the gaps of centuries...".

Manfred is a Faustian noble living in the Bernese Alps. Internally tortured by some mysterious guilt, which has to do with the death of his most beloved, Astarte, he uses his mastery of language and spell-casting to summon seven spirits, from whom he seeks forgetfulness. The spirits, who rule the various components of the corporeal world, are unable to control past events and thus cannot grant Manfred's plea. For some time, fate prevents him from escaping his guilt through suicide. At the end, Manfred dies defying religious temptations of redemption from sin. Throughout the poem, he succeeds in challenging all authoritative powers he comes across, and chooses death over submitting to spirits of higher powers. Manfred directs his final words to the Abbot, remarking, "Old man! 't is not so difficult to die."

Manfred was written shortly after the failure of Byron's marriage to Annabelle Millbanke, who most likely accused him of an incestuous relationship with his half-sister Augusta Leigh. At the time, he had exiled himself permanently from England and was living at the Villa Diodati in Switzerland. Most of Manfred was written on a tour through the Bernese Alps in September 1816. The third act was rewritten in February 1817 since Byron was not happy with its first version.

Manfred shows some influence by Goethe's Faust, which Byron only read or heard in translation, but it is by no means a simple copy.

Manfred was not originally intended for the stage; it was written to be a dramatic poem or as Byron called it a "metaphysical" drama.

Manfred has received much more attention on stage for its musical treatments by Tchaikovsky and Schumann than it has on its own dramatic terms. Byron may have intended the title role for Edmund Kean. It was later famously played by Samuel Phelps. There are no recorded full stagings in Britain in the twentieth century, but readings are more popular, partly because of the difficulty of staging a play set in the Alps. The exceptional size of the role of Manfred also makes the play difficult to cast. There was a production on BBC Radio 3 in 1988, however, which starred Ronald Pickup as Manfred.

It is interesting to note that the character Manfred was mentioned by Alexandre Dumas, père in his novel The Count of Monte Cristo, where the Count declares: "No, no, I wish to do away with that mysterious reputation that you have given me, my dear viscount; it is tiresome to be always acting Manfred. I wish my life to be free and open."

Indeed, the Count of Monte Cristo is quite similar to Manfred, in that he wants to keep his past a secret, feels superior to social conventions, and is following an agenda that runs counter to the social mores.

On page 61 of The Crying of Lot 49 by Thomas Pynchon, Di Presso seems to refer (perhaps by accident) to Metzger as Manfred.

Manfred's oft-quoted speech from Act II Scene 1 which begins "Thinks't thou existence doth depend on time?" is quoted on page 351 of The Masters of Solitude by Marvin Kaye and Parke Godwin.

Fyodor Dostoyevsky mentions the poem in Notes from Underground when the narrator states, "I received countless millions and immediately gave them away for the benefit of humanity, at the same moment confessing before the crowd all my infamies, which, of course, were not mere infamies, but also contained within them a wealth of 'the lofty and the beautiful' of something Manfred-like" (Dostoyevsky, page 57. Bantam Books 2005)

"In Byron’s poem, the hero, a superhuman character, is doomed by fate to destroy those he loves. In vain he undertakes to find Astarte, his ideal spirit who alone has the power to assuage the feeling of guilt with which he is obsessed.

The argument for Manfred, in the choreographic version, lets the imagination run free using this basic theme to which references borrowed from other autographical poems by Byron have been associated. Inspiration has also been taken from the libretto that Tchaikovsky produced from the original work.

The characters and events forming the storyline come from the life of Byron himself. Therefore, we meet the loves and hates of his youth, his tireless quest for wisdom and peace, in friendship, in love, and in patriotic fervour." Programme for Manfred, Palais des Sports, 1979.