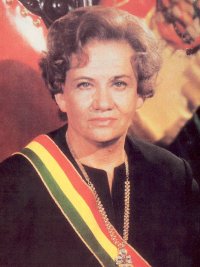 Gueiler was born in Cochabamba, and studied to become an . In the 1940s she joined the (MNR). When that party came to power as a result of the 1952 , Gueiler became a member of the , serving in that capacity from 1956 until 1964. In 1964 she went into exile abroad, after the MNR was toppled from power by generals and Ovando. She spent the next fifteen years out of the country, and joined 's (PRIN). Upon returning to in 1979, she again ran for congress and was elected President of the (the lower house of the Bolivian congress) as part of the MNR alliance of former president .

Since no presidential candidate in the 1979 elections had received the necessary 50% of the vote, it fell to Congress to decide who should be first executive. Surprisingly, no agreement could be reached, no matter how many votes were taken. An alternative was offered in the form of the President of the , Dr. , who was named temporary Bolivian President in August 1979 pending the calling of new elections in 1980. Guevara was shortly afterwards overthrown in a led by General . The population resisted, however, led by a nationwide called by the powerful ("COB") of . In the end, Natusch was able to occupy the for only sixteen days, after which he was forced to give up power. The only face-saving concession he extracted from Congress was the promise that Guevara not be allowed to resume his duties as president. This condition was accepted and a new provisional president was found in the leader of the lower congressional house, Mrs. .

As interim President, Gueiler was entrusted with the task of conducting the nation to new elections in 1980. Before these could be held, however, Gueiler herself was overthrown in a bloody military coup by General . Gueiler then left the country, and lived in until the fall of the in 1982. Later, she served her country mostly in the diplomatic sphere, having been appointed Bolivia's to first , then , and finally -- after joining Jaime Paz's "Movimiento de Izquierda Revolucionaria" -- to (1989). She retired from public life in the mid 1990s.

Mrs. Gueiler has been involved in various Bolivian feminist organizations throughout her life. She opposed the U.S.-backed in , particularly the so-called . In addition, she has written two books, publishing "La mujer y la revolución" ("The woman and the revolution") in 1960 and her , "Mi pasión de lidereza" ("My passion as a leader") ), in 2000. In the 2005 election she supported the candidacy of .