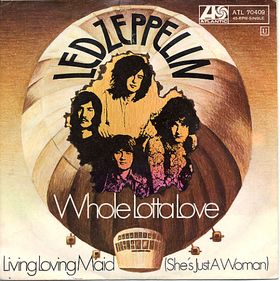 "Whole Lotta Love" is a song by English rock band . It is featured as the opening track on the band's second album, "", and was their first hit single. In 2004, the song was ranked #75 on Rolling Stone's list of the 500 Greatest Songs of All Time, and in March 2005, "Q" magazine placed "Whole Lotta Love" at number 3 in its list of the 100 Greatest Guitar Tracks and it placed 11 on a similar list by . It is also the last track the band ever played as whole.

It was recorded at various studios in and during the band's second concert tour of the United States and assembled by at in . Already part of their live repertoire, it saw its first official release on the LP "Led Zeppelin II" on (Atlantic LP #8236).

In 1962, recorded "You Need Love" by peer . In 1966 British soul band recorded the song as "You Need Loving" for their début Decca LP. Some of the lyrics of Led Zeppelin's version were borrowed from the song, a favorite of Plant's. Plant's phrasing is particularly similar to that of 's in the Small Faces' version. Similarities with "You Need Love" (and "") would lead to a lawsuit settled out of court in favour of Dixon in .

Robert Plant, a huge fan of blues and soul singers, regularly quoted other songs, especially live. The practice of borrowing others' lyrics has long been integral to the blues style. To quote Robert Plant:

Page played the loose Blues riff for the intro, on a Sunburst 1958 Les Paul Standard through a 100W Marshall "Plexi" head amp with distortion from the EL34 output valves, which ascends into the first chorus. Then, beginning at 1:24 (and lasting until 3:02) the song dissolves to a -like break involving a solo and the moans of (sometimes called the " section"). Plant did the vocals in one take. As audio engineer has explained: "The famous Whole Lotta Love mix, where everything is going bananas, is a combination of Jimmy and myself just flying around on a small console twiddling every knob known to man." Kramer is also quoted as saying:

cquote|"Interviewer": Is it true "Whole Lotta Love" was written onstage during a gig in America, when you were all jamming on a song?"Page": No. No. Absolutely incorrect. No, it was put together when we were rehearsing some music for the second album. I had a riff, everyone was at my house, and we kicked it from there. Never was it written during a gig--where did you hear that?

"Interviewer": I read it in a book.

In a separate interview, Page explained:

For this track, Page employed the production technique.

Upon release of the LP, radio stations looked for a track that would fit their on-air formats from the quickly successful LP with the pulsing, skronk-raunch lead track "Whole Lotta Love" being the prime contender. However, because many radio stations saw the freeform middle section as unfit to air they simply created their own edited versions.Atlantic Records was quick to respond and in addition to the release of the regular single in the US (coupled with "" from the same LP as the B-side) released a 3:10 version of the track with the freeform section cut and an earlier fade-out on . Both versions were released as Atlantic #45-2690. The edited version was intended for radio station promotional release but some copies were apparently released commercially in the US and are a collector's item for fans. The song was released as a single in the US, , (as No 1), , , and (countries where the band had less control). The edited version was withdrawn.

In the , Atlantic Records had expected to issue the edited version themselves, and pressed initial copies for release on December 5, 1969. However, band manager Peter Grant was adamant that the band maintain a "no-singles" approach to marketing their recorded music in the UK, and he halted the release. An official statement from the band added that they had written a special number which they intended to be their first British single. This never materialised, and despite much record company pressure, they declined to issue official singles in the UK throughout their career.

Several years later, Atlantic Records reissued "Whole Lotta Love" (with its original B-side "Living Loving Maid") on its Oldies Series label (OS-13116) with a slight error. The edited 3:10 version was used for the reissue, but the labels were printed with the unedited running time of 5:33.

In 1997 Atlantic Records released a CD-single edited (to 4:50 this time) from the original 1969 recording of the song. This version charted in the UK where the band had maintained control over single releases during their existence.

"Whole Lotta Love" was the last song Led Zeppelin ever played live in their original lineup. It was however performed again at the band's reunions in and , as well as at the at the O2 Arena, on , , with sitting in on drums for his late father. It also featured in the closing ceremony of the in on , , in a rewritten version with Jimmy Page on guitar and providing the vocals. Some of the original lyrics were changed for being too explicit. [ [http://www.telegraph.co.uk/sport/othersports/olympics/2603561/Led-Zeppelin-classic-too-racy-for-Olympics.html Led Zeppelin classic 'too racy' for Olympics] , "", 23 August 2008.]

An instrumental cover version of the track by CCS was a UK Top 20 hit in 1970. The song is famous in the for having been the theme music for the long-running television programme "" during the 1970s. It was produced by .

A cover called "Whole Lotta Love" was released by dance act Goldbug in 1996. The lyrics were intact, but the backing consisted of the music of . The single reached #3 in the charts, surpassing the success of the original, which had not even charted in the UK.

A cover described as "Raw Harp Version" was released by UK blues harmonica player Will Tang in 2008 as a B-side to his single "The Other Side".

Reportedly, Prince will release a live version of "Whole Lotta Love" with his 2008 release "".

At the closing ceremony of the "" Jimmy Page performed this song with Leona Lewis during the hand over from Beijing to London, which will host the "".

Perry Farrell does a reworked version of the song on his album .

The band have covered the song live.