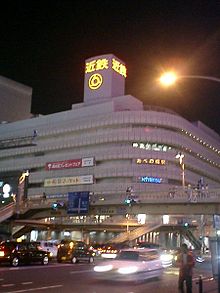 The west ticket gates of the station were shifted 35 m to the east on March 20, 2009, so that station facilities are entirely within the Kintetsu Abeno department store's "new" (east) building. The "old" (western) portion is set to be demolished to make way for a new high-rise building.[2]

Establishments around the station

The west building of Kintetsu Department Store is now under reconstruction to complete in March 2014. The building is named "Abeno Harukas".

Stations next to Ōsaka Abenobashi