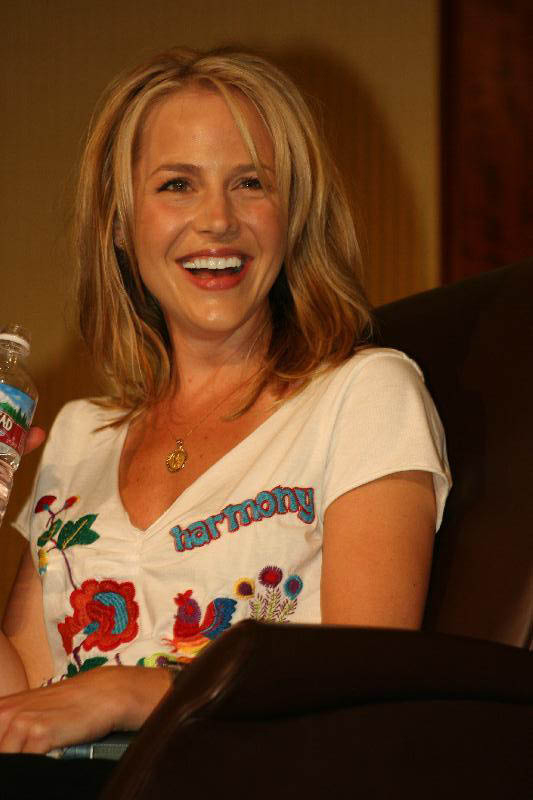 Julie Benz (born May 1, 1972) is an American actress. For her role as Rita Bennett on "Dexter", Benz won the 2006 Satellite Award for Actress in a Supporting Role in a Series, Mini-Series or Motion Picture Made for Television. She is also well known for her role of Darla on "Angel" and "Buffy the Vampire Slayer".

Benz was born in . Her father is a Pittsburgh surgeon and, contrary to rumor, her mother was never an ice figure skater. [cite web|url=http://adam.freefm.com/episode_download.php?contentType=36&contentId=1386319|title= Adam Carolla Show January 31st, 2008] The family settled in nearby Murrysville when Benz was two, and she started ice skating when she was three. She competed in the 1988 U.S. Championships in junior ice dancing with her partner David Schilling, coming in 13th. [cite web|url= http://www.smgfan.com/JulieBenz.htm|title= SMGFAN.com's Exclusive Interview with Julie Benz|accessdate= 2008-02-03|date= 2003-11-11|publisher= smgfan.com] Her older brother and sister, Jeffrey and Jennifer, were the 1987 U.S. Junior Champions in ice dancing and competed internationally. When Benz was 14, she had a bad stress fracture and had to take time off. She grew up in , graduating from Franklin Regional High School. She later graduated from .

By 1989, with her figure skating career being over, Benz turned to acting and got involved in the local theater, where she got a role in the play "Street Law". Her first movie role was a small, credited, speaking part in "The Black Cat" segment of the Dario Argento/George A. Romero co-directed horror flick "Two Evil Eyes" (1990). A year later, she got a role on a TV show called "Hi Honey, I'm Home" (1991). The show was cancelled after two seasons.

After graduating from high school, Julie entered New York University to study acting. After graduation, Julie moved to Los Angeles to further pursue her career and landed some small roles in movies and TV shows, including a guest appearance on an episode of "" in 1994 and a role in the Aaron Spelling unaired TV pilot "Cross Town Traffic". She also starred as Christie Lambert in another unaired TV pilot called "Empire" in 1995. She went on to guest star in many TV shows which include "", "", "" and "". She also had a small role in the TV movie "". She had an uncredited role in "Black Sheep" and guest appearances in the shows "", "" and "". She played Kristy in the TV movie "" and a lead role as Julie Falcon in "".

In 1996, Julie auditioned for the role of Buffy in the series "Buffy the Vampire Slayer" (1997), but lost out to . However, she was offered a small role as a vampire girl in the pilot episode in which she did such a good job that her part was expanded to a few more episodes in playing the vampire Darla. With that, her career had finally taken off. She guest starred in more TV shows like "" and "" whilst getting a small, but memorable, role playing a receptionist in the movie "" (1997). She went on to star in the short spoof film "Eating Las Vegas", TV Movie "" and a small role in "" as a co-ed.

In 1998, she had a recurring role as the ditzy Joplin Russell in the TV show "" (though the show was cancelled and only 2 of her many appearances aired) then guest starred on "" and "". She also starred in two movies, the popular dark comedy "" as Marcie Fox and "" which premiered on September 19th 1999 on SightSound.com before landing a lead role in another TV show called "Payne" as Breeze O’Rourke who is a proud virgin working at the Whispering Pines Inn and was similar to the Polly character from ; the show was cancelled after one season (only 8 of the 9 episodes aired). She also had a recurring role on the show "Roswell", starred in the TV movie "" and had a lead role in the horror movie parody "" as Barbara.

She reprised her role as Darla in 2000 for the Buffy spin-off series "Angel" appearing in every season of the show for at least one episode. She had a role in the romantic comedy film "The Brothers" in which she was the only white person featured in the principal cast and was a Guest Host for the TV show "Rendez-View". She was cast as Ellie Sparks in "Glory Days" and appeared in the unaired pilot; however she left the show. She guest starred on "" and was in the featured cast for the mini-series "" as Kate Keys. She did various voices for the video game "", appeared in the short film "The Midget Stays in the Picture" and took over the role of Ursula for "".

Julie went on to guest star in "", "Coupling", ' and "". She landed the lead role of Annie Garrett in the Hallmark TV movie "". Benz also provided the voice of Miranda Keyes in the video game "", though she did not return to the role in the sequel "" as Bungie wanted to try a new direction with the Miranda Keyes voice by giving the character an accent, replaced by . She played the lead role of Danielle in "" (a film shot in 2000 under the title "A Fate Totally Worse Than Death") which was released on DVD in 2005. She had a small role in the critically acclaimed TV movie "". In the Scifi Original ' she played the lead female role Vicky and she also appeared in the straight-to-DVD movie "" as Lynn. The film was originally called "The Velvet Side of Hell" and was not supposed to be a sequel to "8MM".

Julie then guest starred on popular shows like "Supernatural", ', "" and '. She had a supporting role in a Swedish independent movie called "", a lead role in the Lifetime Movie "Circle of Friends" and joined the main cast of TV show "Dexter" as Rita Bennett. She plays the lead female Sarah in " Rambo" and then appeared in a promo campaign for PETA called "Violence Link PETA PSA" and a promo for the "Burma: It Can't Wait" Campaign. She is also going to be the lead role in the fifth film of the popular Saw franchise, playing a character called Brit. She has a lead role in the sequel "" as Angela Donatelli.