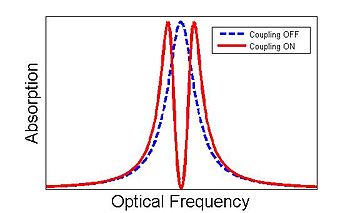 The effect of EIT on a typical absorption line. A weak probe normally experiences absorption shown in blue. A second coupling beam induces EIT and creates a "window" in the absorption region (red). This plot is a computer simulation of EIT in an InAs/GaAs quantum dot

Electromagnetically induced transparency (EIT) is a coherent optical nonlinearity which renders a medium transparent over a narrow spectral range within an absorption line. Extreme dispersion is also created within this transparency "window" which leads to "slow light", described below.

Observation of EIT involves two optical fields (highly coherent light sources, such as lasers) which are tuned to interact with three quantum states of a material. The "probe" field is tuned near resonance between two of the states and measures the absorption spectrum of the transition. A much stronger "coupling" field is tuned near resonance at a different transition. If the states are selected properly, the presence of the coupling field will create a spectral "window" of transparency which will be detected by the probe. The coupling laser is sometimes referred to as the "control" or "pump", the latter in analogy to incoherent optical nonlinearities such as spectral hole burning or saturation.

EIT is based on the destructive interference of the transition probability between atomic states. Closely related to EIT are coherent population trapping (CPT) phenomena. EIT is a coherently prepared media which has long quantum memory 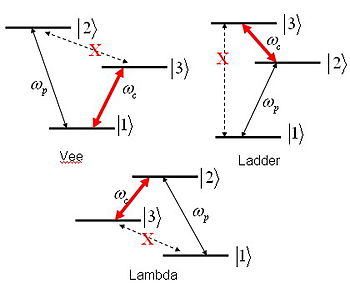 EIT level schemes can be sorted into three categories; vee, ladder, and lambda.

There are specific restrictions on the configuration of the three states. Two of the three possible transitions between the states must be "dipole allowed", i.e. the transitions can be induced by an oscillating electric field. The third transition must be "dipole forbidden." One of the three states is connected to the other two by the two optical fields. The three types of EIT schemes are differentiated by the energy differences between this state and the other two. The schemes are the ladder, vee, and lambda. Any real material system may contain many triplets of states which could theoretically support EIT, but there are several practical limitations on which levels can actually be used.

Also important are the dephasing rates of the individual states. In any real system at finite temperature there are processes which cause a scrambling of the phase of the quantum states. In the gas phase, this means usually collisions. In solids, dephasing is due to interaction of the electronic states with the host lattice. The dephasing of state |3> is especially important, ideally |3> should be a robust, metastable state.

EIT was first proposed theoretically by professor Jakob Khanin and graduate student Olga Kocharovskaya at Gorky State University (present: Nizhnij Novgorod), Russia [1]; there are now several different approaches to a theoretical treatment of EIT. One approach is to extend the density matrix treatment used to derive Rabi oscillation of a two-state, single field system. In this picture the probability amplitude for the system to transfer between states can interfere destructively, preventing absorption. In this context, "interference" refers to interference between quantum events (transitions) and not optical interference of any kind. As a concrete example, consider the lambda scheme shown above. Absorption of the probe is defined by transition from

. The fields can drive population from

. The probability amplitudes for the different paths interfere destructively. If

has a comparatively long lifetime, then the result will be a transparent window completely inside of the

Another approach is the "dressed state" picture, wherein the system + coupling field Hamiltonian is diagonalized and the effect on the probe is calculated in the new basis. In this picture EIT resembles a combination of Autler-Townes splitting and Fano interference between the dressed states. Between the doublet peaks, in the center of the transparency window, the quantum probability amplitudes for the probe to cause a transition to either state cancel.

A polariton picture is particularly important in describing stopped light schemes. Here, the photons of the probe are coherently "transformed" into "dark state polaritons" which are excitations of the medium. These excitations exist (or can be "stored") for a length of time dependent only on the dephasing rates. 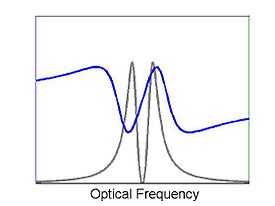 Rapid change of index of refraction (blue) in a region of rapidly changing absorption (gray) associated with EIT. The steep and positive linear region of the refractive index in the center of the transparency window gives rise to slow light

It is important to realize that EIT is only one of many diverse mechanisms which can produce slow light. The Kramers–Kronig relations dictate that a change in absorption (or gain) over a narrow spectral range must be accompanied by a change in refractive index over a similarly narrow region. This rapid and negative change in refractive index produces an extremely low group velocity. See for this the comprehensive review on this subject in.[1] The first experimental observation of the low group velocity produced by EIT was by Boller, Imamoglu, and Harris at Stanford University in 1991 in strontium. The current record for slow light in an EIT medium is held by Budker, Kimball, Rochester, and Yashchuk at U.C. Berkeley in 1999. Group velocities as low as 8 m/s were measured in a warm thermal Rubidium vapor.[2]

Stopped light, in the context of an EIT medium, refers to the coherent transfer of photons to the quantum system and back again. In principle, this involves switching off the coupling beam in an adiabatic fashion while the probe pulse is still inside of the EIT medium. There is experimental evidence of trapped pulses in EIT medium. In [3] authors created stationary light pulse inside the atomic coherent media. In 2009 researchers from Harvard University and MIT demonstrated few-photon optical switch for quantum optics based on the slow light ideas [4]