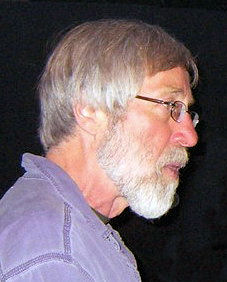 John Zerzan (born ) is an American anarchist and primitivist and author. His works criticize agricultural as inherently oppressive, and advocate drawing upon the ways of life of prehistoric humans as an inspiration for what a free society should look like. Some of his criticism has extended as far as challenging , , symbolic thought (such as and ) and the concept of time. His five major books are "" (1988), "" (1994), "" (2002), "" (2005) and "" (2008).

Zerzan was born in Salem, to immigrants of n heritage. He studied as an undergraduate at and later received a in History from . He completed his coursework towards a at the but dropped out before completing his .

Zerzan's theories draw on 's concept of negative dialectics to construct a theory of as the cumulative construction of alienation. According to Zerzan, original human societies in times, and similar societies today such as the !Kung, and , live a non-alienated and non-oppressive form of life based on primitive abundance and closeness to nature. Constructing such societies as a kind of political ideal, or at least an instructive comparison against which to denounce contemporary (especially industrial) societies, Zerzan uses anthropological studies from such societies as the basis for a wide-ranging critique of aspects of modern life. He portrays contemporary society as a world of misery built on the psychological production of a sense of scarcity and lack. [ [http://www.insurgentdesire.org.uk/massmisery.htm John Zerzan - The Mass Psychology of Misery] ] The history of civilisation is the history of renunciation; what stands against this is not progress but rather the which arises from its negation.

Zerzan is an anarchist, and is broadly associated with the philosophies of , , anti-civilisation, , neo-luddism and embodiment, and in particular opposition to

Zerzan's work relies heavily on a strong between the "primitive" &mdash; viewed as non-alienated, wild, non-hierarchical, ludic, and socially egalitarian &mdash; and the "civilised" &mdash; viewed as alienated, domesticated, hierarchically organised and socially discriminatory. Hence, "life before domestication/agriculture was in fact largely one of leisure, intimacy with nature, sensual wisdom, sexual equality, and health."

Zerzan's claims about the status of primitive societies are based on a reading of the works of anthropologists such as and Richard B. Lee. Crucially, the category of primitives is restricted to pure hunter-gatherer societies with no domesticated plants or animals. For instance, hierarchy among Northwest Coast Native Americans whose main activities were fishing and foraging is attributed to their having domesticated dogs and tobacco.

Zerzan calls for a "Future Primitive", a radical reconstruction of society based on a rejection of alienation and an embracing of the wild. "It may be that our only real hope is the recovery of a face-to-face social existence, a radical , a dismantling of the devouring, estranging productionist, high-tech trajectory that is so impoverishing."

Zerzan's political project calls for the destruction of technology. He draws the same distinction as , between tools that stay under the control of the user, and technological systems that draw the user into their control. One difference is the , which Zerzan opposes. In Zerzan's philosophy, technology is possessed by an which automatically has power over other users; This power is one of the sources of alienation, along with and symbolic thought.

In 1966, Zerzan was arrested while performing at a Berkeley anti- march and spent two weeks in the Jail. He vowed after his release never again to be willingly arrested. He attended events organized by and the and was involved with the drug and music scene in 's neighborhood.

In the late 1960s he worked as a for the city of welfare department. He helped organize a social worker's union, the SSEU [ [http://www.shapingsf.org/ezine/labor/nopaid/main.html History of the union] ] , and was elected vice president in 1968, and president in 1969. The local Situationist group Contradiction denounced him as a " bureaucrat [ [http://www.bopsecrets.org/PH/zerzan.htm "Open Letter to John Zerzan, anti-bureaucrat of the San Francisco Social Services Employees Union"] ] . He became progressively more radical as he dealt further with his and other unions. He was also a voracious reader of the Situationists, being particularly influenced by .

In 1974, Black and Red Press published "Unions Against Revolution" by Spanish theorist that included an essay by Zerzan which previously appeared in the journal "Telos". Over the next 20 years, Zerzan became intimately involved with the "Fifth Estate", "", "Demolition Derby " and other anarchist periodicals. After reading the works of , David Watson and others, he slowly came to the conclusion that civilization itself was at the root of the problems of the world and that a hunter-gatherer form of society presented the most egalitarian model for human relations with themselves and the natural world.

Zerzan and the "Unabomber"

In the mid-1990s, Zerzan became a confidant to , the "Unabomber", after he read "Industrial Society and Its Future", the so-called "Unabomber Manifesto." Zerzan sat through the Unabomber trial and often conversed with Kaczynski during the proceedings. It was after becoming known as a friend of the Unabomber that the mainstream media became interested in Zerzan and his ideas.

In Zerzan's essay "Whose Unabomber?" (1995), he signaled his support for the Kaczynski doctrine, but criticised the bombings:

:...the mailing of explosive devices intended for the agents who are engineering the present catastrophe is too random. Children, mail carriers, and others could easily be killed. Even if one granted the legitimacy of striking at the high-tech horror show by terrorizing its indispensable architects, collateral harm is not justifiable...

However, Zerzan in the same essay offered a qualified defense of the Unabomber's actions:

:The concept of justice should not be overlooked in considering the Unabomber phenomenon. In fact, except for his targets, when have the many s who are preparing the ever been called to account?… Is it unethical to try to stop those whose contributions are bringing an unprecedented assault on life?

:Enter the Unabomber and a new line is being drawn. This time the bohemian schiz-fluxers, Green s, hobbyist anarcho-journalists, condescending organizers of the poor, hip nihilo-aesthetes and all the other "anarchists" who thought their pretentious pastimes would go on unchallenged indefinitely - well, it's time to pick which side you're on. It may be that here also is a Rubicon from which there will be no turning back.

On May 7, 1995, a full-page interview with Zerzan was featured in "" [ NYTimes Article [http://query.nytimes.com/gst/fullpage.html?res=990CE3DD113FF934A35756C0A963958260&sec=&spon=&&scp=1&sq=zerzan&st=cse] ] . Another significant event that shot Zerzan to celebrity philosopher status was his association with members of the anarchist scene that later were the driving force behind the use of tactics at the 1999 anti- protests in , . Anarchists using black bloc tactics were thought to be chiefly responsible for the property destruction committed at numerous corporate storefronts and banks.

News media coverage started a firestorm of controversy after the riots, and Zerzan was one of those that they turned to in order to explain the actions that some had taken at the demonstrations. After gaining this public notoriety, Zerzan began accepting speaking engagements and giving interviews around the world explaining anarcho-primitivism and the more general "". Recently Zerzan has been involved with the Post-left anarchist trend, which argues that anarchists should break with the .

Zerzan is currently one of the editors of "", a journal of anarcho-primitivist and insurrectionary anarchist thought. He is also the host of "Anarchy Radio" in Eugene on the 's radio station [http://gladstone.uoregon.edu/~kwva/ KWVA] which airs Tuesday nights 9 to 10 pm Pacific Standard Time (PST) as of March 11th 2008. He has also served as a contributing editor at "" and has been published in magazines such as "". He does extensive speaking tours around the world, and is married to an independent consultant to museums and other s.