Cheyenne (pronounced /ʃaɪˈæn/ or /ʃaɪˈɛn/ or Shy-anne) is the capital and most populous city of the U.S. state of Wyoming and the county seat of Laramie County.[4] It is the principal city of the Cheyenne, Wyoming, Metropolitan Statistical Area which encompasses all of Laramie County. The population is 59,466 at the 2010 census. Cheyenne is the northern terminus of the extensive and fast-growing Front Range Urban Corridor. Cheyenne is situated on Crow Creek and Dry Creek. The Cheyenne, Wyoming Metropolitan Area had a 2010 population of 91,738, making it the 354th most populated metropolitan area in the United States.

On July 5, 1867, General Grenville M. Dodge and his survey crew platted the site now known as Cheyenne in Dakota Territory (later Wyoming Territory). This site was chosen as the point at which the Union Pacific Railroad crossed Crow Creek, a tributary of the South Platte River. The city was not named by Dodge, as his memoirs state, but rather by friends who accompanied him to the area Dodge called "Crow Creek Crossing." It was named for the American Indian Cheyenne nation, one of the most famous and prominent Great Plains tribes closely allied with the Arapaho.

There were many from a hundred miles around who felt the construction of the Union Pacific Railroad through the area would bring them prosperity. By the time the first track was built into Cheyenne November 13, 1867, over four thousand people had migrated into the new city. 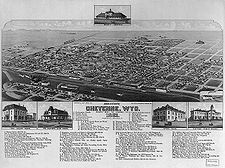 As the capital of the Wyoming Territory and the only city of any consequence, as well as being the seat of the stockyards where cattle were loaded on the Union Pacific Railroad, the city's Cheyenne Club was the natural meeting place for the organization of the large well-capitalized ranches called the Wyoming Stock Growers Association. (See Johnson County War of 1892, the largest of the "range wars" of early Wyoming history).

Cheyenne, like most of the rest of Wyoming, is semi-arid (Koppen BSk). Winters are cold and moderately long, but relatively dry, with a January average of 25.9 °F (−3.4 °C), highs that fail to reach freezing occur 37 days per year, and lows dip to the 0 °F (−18 °C) mark on 12 nights.[6] However, the coldness is often interrupted, with chinook winds blowing downslope from the Rockies that can warm conditions, bringing the high above 50 °F (10 °C) on 20 days from December to February.[6] Snowfall is greatest in March and April, averaging 60 inches (152 cm) for the season, yet thick snow cover rarely stays.[6][6] Summers are warm, with a July average of 67.7 °F (19.8 °C), and highs reaching 90 °F (32 °C) 8 times. Spring and autumn are quick transitions, with the median freeze dates being May 12 and September 26.[6] The annual precipitation tends to be concentrated from May to August and is low during fall and winter, contributing to the area's 2980 hours (~68%) of the possible total, of sunshine per year.

Cheyenne includes many neighborhoods within and out of its city limits. Not all listed, but some of them include:

Cheyenne's government consists of a mayor and a city council. The mayor is elected in a citywide vote. The city council has nine members each of whom are elected from one of three wards. Each ward elects three members.[13]

Cheyenne is home to Laramie County Community College (LCCC), a branch of Institute of Business & Medical Careers, and a branch of University of Phoenix.

Government is the largest sector of Cheyenne's economy. The state of Wyoming operates a multitude of offices in downtown Cheyenne. Many area residents are employed by or are dependent on the U.S. Air Force, through F.E. Warren Air Force Base to the west of the city, or by the Wyoming National Guard. Railroads remain a major economic force for the city, with both the Burlington Northern Santa Fe and Union Pacific employing many residents.[14]

Steps have been taken in recent years to diversify the city's economy. Lowe's and Wal-Mart both operate distribution centers on the city's outskirts. Sierra Trading Post is headquartered in the city and also operates its distribution and fulfillment centers in the city.[15]

Cheyenne's high elevation, coupled with its position on the continent, make it one of the windiest cities in America. The abundance of wind makes Cheyenne an opportune place to develop wind energy and to fly kites. Wind turbines are currently being placed around Laramie County. Laramie County Community College is home to a leading wind energy technician program, where students learn to maintain these turbines. The opening of a Vestas wind turbine blade assembly in nearby Weld County, Colorado, as well as other alternative energy manufacturing facilities around Colorado, are transforming the region into a center for alternative energy.

Great Lakes Airlines and Taco John's are headquartered in Cheyenne.[16][17]

In addition to the parks, Cheyenne has many paths that make up the Greater Cheyenne Greenway. The greenway serves as a gateway to the parks and neighborhoods of Cheyenne. In 1996, as a result of the greenway, Cheyenne was named " Trail Town USA " by the National Park service and the American Hiking Society.

Golf Couses in Cheyenne are

Cheyenne has one of only three enclosed shopping malls in Wyoming, the Frontier Mall. The others being Eastridge Mall in Casper, and the White Mountain Mall in Rock Springs. 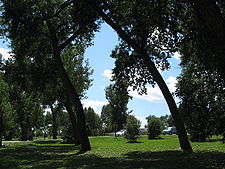 Over fifty different locations in Cheyenne are listed on the National Register of Historical Places, including:

Several districts in the city are also listed, including: 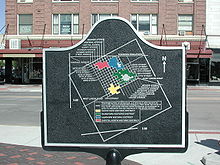 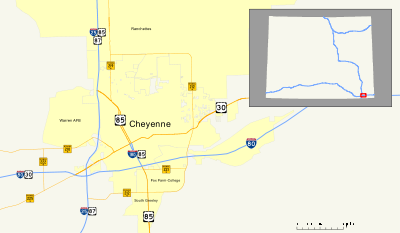 The Union Pacific and BNSF railroads intersect in Cheyenne. The city is home to a BNSF railyard, as well as the Union Pacific's steam program. UP's 844 and 3985 reside in the steam shop.[19]

Cheyenne Frontier Days, which occurs during 10 days centered around the last full week in July, is the largest outdoor rodeo in the US. The events include professional bull riding, cattle roping, barrel racing and many others. During this week there are many parades and other events. Additionally there is a carnival with numerous rides, games and shops. Frontier Days concerts scheduled for 2011 are: Kid Rock, Jason Aldean, The Charlie Daniels Band, Motley Crue, Darius Rucker, Sara Evans, Zac Brown Band, and Toby Keith with Eric Church.[20]

In the Spike TV series Blue Mountain State, the main characters Alex Moran and Sammy Cacciatore are from Cheyenne.

Three novels by Philip K. Dick are partly set in Cheyenne. In The Man in the High Castle, it is where Hawthorne Abendsen lives in the eponymous "High Castle". In Dr. Bloodmoney, it is the seat of a military dictatorship. In The Penultimate Truth, several characters are linked by post-apocalyptic Cheyenne.

In the American serial drama Jericho, Cheyenne is the capital city of the Allied States of America, a separatist faction of the United States formed after a surprise nuclear attack on the country's major metropolitan areas.

In the 1984 motion picture Red Dawn, Cheyenne is the farthest north that the Cuban, Soviet, and Nicaraguan forces have pushed American forces. In the motion picture Ready to Rumble, the two main protagonists go to a live WCW Monday Night Nitro in Cheyenne.

Garth Brooks recorded the song "Beaches of Cheyenne". James McMurtry wrote and recorded a song titled, "Lights of Cheyenne".Guided by Voices have a song titled "Cheyenne" on Universal Truths and Cycles. A B-side of The Hold Steady's Stay Positive is titled "Cheyenne Sunrise" ("there's nothing like a Cheyenne sunrise to make us has-beens feel too old"). Country singer George Strait recorded the song "I Can Still Make Cheyenne". Country singer Eric Church makes reference to spurring a bull in Cheyenne in the song "These Boots".