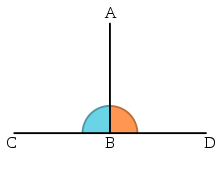 The line segments AB and CD are orthogonal to each other.

Orthogonality occurs when two things can vary independently, they are uncorrelated, or they are perpendicular.

In mathematics, two vectors are orthogonal if they are perpendicular, i.e., they form a right angle. The word comes from the Greek ὀρθός (orthos), meaning "straight", and γωνία (gonia), meaning "angle".

This means that T preserves the angle between x and y, and that the lengths of Tx and x are equal.

The word normal is sometimes[citation needed] used in place of orthogonal. However, normal may also refer to unit vectors. In particular, an orthogonal set is called orthonormal if all its vectors are unit vectors. So, using the term normal to mean "orthogonal" is often avoided. Sometimes normal is used to describe a straight line that intersects a curve at a right angle. For example, the y-axis is normal to the curve y = x2 at the origin.

In 4-dimensional Euclidean space, the orthogonal complement of a line is a hyperplane and vice versa, and that of a plane is a plane.[citation needed]

It is common to use the following inner product for two functions f and g:

Here we introduce a nonnegative weight function w(x) in the definition of this inner product.

We say that those functions are orthogonal if that inner product is zero:

is the Kronecker delta. In other words, any two of them are orthogonal, and the norm of each is 1 in the case of the orthonormal sequence. See in particular orthogonal polynomials.

In art the perspective imagined lines pointing to the vanishing point are referred to as 'orthogonal lines'.

The term "orthogonal line" often has a quite different meaning in the literature of modern art criticism. Many works by painters such as Piet Mondrian and Burgoyne Diller are noted for their exclusive use of "orthogonal lines" — not, however, with reference to perspective, but rather referring to lines which are straight and exclusively horizontal or vertical, forming right angles where they intersect. For example, an essay at the website of the Thyssen-Bornemisza Museum states that "Mondrian ....dedicated his entire oeuvre to the investigation of the balance between orthogonal lines and primary colours." [1]

Orthogonality is a system design property facilitating feasibility and compactness of complex designs. Orthogonality guarantees that modifying the technical effect produced by a component of a system neither creates nor propagates side effects to other components of the system. The emergent behavior of a system consisting of components should be controlled strictly by formal definitions of its logic and not by side effects resulting from poor integration, i.e. non-orthogonal design of modules and interfaces. Orthogonality reduces testing and development time because it is easier to verify designs that neither cause side effects nor depend on them.

For example, a car has orthogonal components and controls (e.g. accelerating the vehicle does not influence anything else but the components involved exclusively with the acceleration function). On the other hand, a non-orthogonal design might have its steering influence its braking (e.g. electronic stability control), or its speed tweak its suspension.[2] Consequently, this usage is seen to be derived from the use of orthogonal in mathematics: One may project a vector onto a subspace by projecting it onto each member of a set of basis vectors separately and adding the projections if and only if the basis vectors are mutually orthogonal.

In communications, multiple-access schemes are orthogonal when an ideal receiver can completely reject arbitrarily strong unwanted signals using different basis functions than the desired signal. One such scheme is TDMA, where the orthogonal basis functions are non-overlapping rectangular pulses ("time slots").

Another scheme is orthogonal frequency-division multiplexing (OFDM), which refers to the use, by a single transmitter, of a set of frequency multiplexed signals with the exact minimum frequency spacing needed to make them orthogonal so that they do not interfere with each other. Well known examples include (a, g, and n) versions of 802.11 Wi-Fi; WiMAX; ITU-T G.hn, DVB-T, the terrestrial digital TV broadcast system used in most of the world outside North America; and DMT, the standard form of ADSL.

In OFDM, the sub-carrier frequencies are chosen so that the sub-carriers are orthogonal to each other, meaning that cross-talk between the sub-channels is eliminated and inter-carrier guard bands are not required. This greatly simplifies the design of both the transmitter and the receiver; unlike conventional FDM, a separate filter for each sub-channel is not required.

When performing statistical analysis, independent variables that affect a particular dependent variable are said to be orthogonal if they are uncorrelated[4], since the covariance forms an inner product. In this case the same results are obtained for the effect of any of the independent variables upon the dependent variable, regardless of whether one models the variables' effects individually with simple regression or simultaneously with multiple regression. If correlation is present, the factors are not orthogonal and different results are obtained by the two methods. This usage arises from the fact that if centered (by subtracting the expected value (the mean)), uncorrelated variables are orthogonal in the geometric sense discussed above, both as observed data (i.e. vectors) and as random variables (i.e. density functions). One econometric formalism that is alternative to the maximum likelihood framework, the Generalized Method of Moments, relies on orthogonality conditions. In particular, the Ordinary Least Squares estimator may be easily derived from an orthogonality condition between dependent variables and model residuals.

In taxonomy, an orthogonal classification is one in which no item is a member of more than one group, that is, the classifications are mutually exclusive.

In combinatorics, two n×n Latin squares are said to be orthogonal if their superimposition yields all possible n2 combinations of entries.[5]

In synthetic organic chemistry orthogonal protection is a strategy allowing the deprotection of functional groups independently of each other.

In neuroscience, a sensory map in the brain which has overlapping stimulus coding (e.g. location and quality) is called an orthogonal map.