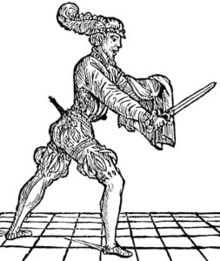 16th century manual of arms illustration of the Dagger and Cloak.

Cloak and dagger is a term sometimes used to refer to situations involving intrigue, secrecy, espionage, or mystery.

The phrase has two possible origins. One dates from the early 19th century and is a translation from the French de cape et d'épée and Spanish de capa y espada (literally "of cloak and sword"). These phrases referred to a genre of drama in which the main characters literally wore these items. In 1840, Henry Wadsworth Longfellow wrote, "In the afternoon read La Dama Duende of Calderón - a very good comedy of 'cloak and sword'." Charles Dickens subsequently used the phrase "cloak and dagger" in his work Barnaby Rudge a year later as a sarcastic reference to this style of drama.[1] The imagery of these two items became associated with the archetypical spy or assassin: The cloak, worn to hide one's identity or remain hidden from view, and the dagger, a concealable and silent weapon.

In historical European martial arts, the term can be taken literally, and refers to wielding a dagger in one hand and a cloak in the other. The purpose of the cloak was to obscure the presence or movement of the dagger, to provide minor protection from slashes, to restrict the movement of the opponent's weapon, and to provide a distraction. Use of the cloak and dagger was considered a "dishonest" method of combat because of its deceptive tactics. Giacomo di Grassi, in "His True Art of Defense" (1570),[2][3] included a section called "The Rapier and Cloake".