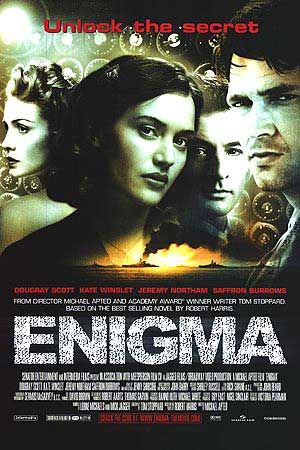 writer =
(based on the novel by Robert Harris)
starring =

The story takes place in March 1943 with the at its height and is loosely based on actual events. The cryptanalysts at , , have a problem: the Nazi s have increased the security of key-changing of their s, leading to a blackout in the flow of naval vital . This could spell disaster in the critical Battle of the Atlantic, on whose outcome Britain's survival depends. The British cryptanalysts have cracked the "shark" cipher before, and they need to do it again in order to keep track of U-boat locations and steer shipping convoys out of their way.

The plot follows the fictional character of the brilliant but maverick working class Tom Jericho (played by ). He is returned to Bletchley Park from Cambridge to assist with the crisis after a period of recuperation bought on by overwork earlier in the war combined with an unhappy love affair with Claire Romilly (), which led to his having a . Jericho immediately tries to see Claire again and finds she has mysteriously disappeared. He enlists the help of Claire's housemate Hester Wallace () to follow the trail of clues and learn what has happened to her. Mr. Jericho and Miss Wallace, as they coldly call each other, repeatedly break the rules of the Bletchley Park establishment and the law as their hunt gets more intense. Jericho is closely watched by agent Wigram (), who plays cat and mouse with him throughout the film. Jericho is tolerated at the Park, despite his transgressions, because of the brilliant plan he invents for uncovering the new key. The plan may unfortunately mean sacrificing at least one Allied convoy to the U-boats.

The film follows events as signals intelligence see a convoy spotted and then hunted down by the U-boats, but this gives enough information for the new key to be analysed using electro mechanical devices.

Tom and Hester at the same time in their unofficial research uncover a British government plot to bury the intelligence information of the for fear it might weaken American willingness to remain in the war on the same side as .

This in turn leads to their suspicion that a Polish cryptanalyst, Jozef 'Puck' Pukowski () at the park may have been so incensed by his own learning of the massacre that he is prepared to betray Bletchley's secrets to the Nazis in order to take revenge on Stalin. [ [http://www.imdb.com/title/tt0157583/plotsummary Plot summary from "IMDB"] .Retrieved on 2007-08-09.]

The film - and by association the book - have attracted criticism for their portrayal of the Polish role in Enigma Fact|date=October 2008. Critics argue that in the film the fictitious traitor turns out to be Polish whilst only slight mention is made of the contributions of pre-war Polish Cipher Bureau s to Enigma decryption efforts and that historically the only known traitor active at Bletchley Park was British spy who passed crucial secrets to the . [ [http://news.bbc.co.uk/1/hi/special_report/1999/09/99/britain_betrayed/444058.stm "The Cambridge spy ring" - BBC News, 13 September 1999] .Retrieved on 2007-08-09.]

* During the film' premiere in , Dougray Scott stayed for only fifteen minutes of the film &ndash; he went to a nearby pub to watch a Scottish Premier League football match between Rangers and his favourite team, Hibernian. Co-producer stayed away altogether. [ [http://www.imdb.com/title/tt0157583/news/ "Jagger No-show At Enigma Premiere", IMDB, 20 August 2001] .Retrieved on 2007-08-09.]
* When Tom Jericho is tapping on the desk with a pencil in the film, he is spelling out "Claire" in .
* When Hester Wallace decodes the long list of Polish names the camera zooms in on the name "Zygalski". was a Polish mathematician who helped to break Enigma designing the "" also known as "Zygalski sheets".
* The mansion in the film is not the real Bletchley Park mansion &ndash; it was shot, instead, at . [ Sleeve notes from DVD. ]
* Co-producer of the Rolling Stones rock group, makes a cameo appearance as a RAF officer at a dance. He also lent the film's design department a four-rotor Enigma encoding machine he owned &ndash; to ensure the historical accuracy of one of the props.
* The festivities around the London premiere of the film are shown in the 2001 documentary "".