The Mastretta MXT is the first high performance sport automobile produced by the Mexican car maker Mastretta, and is notable for being both completely produced and designed in Mexico,[1] as well as the first fully Mexican made sports car.[2] The MXT is a mid-size sports car and its production officially began in January 2011.

The MXT Prototipo Cero (Spanish for Prototype Zero) was the third automotive development by Mastretta and succeeded MXB and MXA kit-cars. The name "MXT" comes from Mastretta and Mexico as well as a reference to its Transverse engine configuration. The Prototipo Cero was developed between 2004 and 2007, and is powered by the Volkswagen inline-4 115 hp (86 kW) engine that is also used in the still-produced fourth generation Jetta. Increased power allows the coupé to reach 200 km/h (124 mph). This contrasts with the top speed and performance of its predecessor, estimated 130 km/h (81 mph) using the VW flat-4 44 hp (33 kW) mounted on the original Beetle. Production was to begin in the first quarter of 2008.[3]

On July 22, 2008, the Mastretta MXT was presented at the British International Motor Show, held in London. This was however the same prototype, so the final production version became likely to be unveiled at the Mexico International AutoShow, held in late September; due to yet unknown reasons, the maker didn't show up.[4] 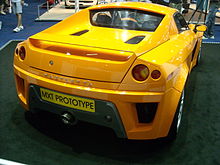 Rear view of the Mastretta MXT at the British International Motor Show.

General specifications and equipment were released later in 2009. Production features include racing bucket seats and seatbelts, Hella xenon headlights, ABS brakes, two airbags, magnesium 17" wheels, digital board instruments, Borla exhaust and, according to designer Daniel Mastretta, a maximum security level which is already being tested to qualify for European quality standards. Though the Prototipo Cero would originally dismiss basics on many modern-day cars (such as AM/FM/CD Radio or air conditioning), the pre-production version already includes them, notably an MP3 CD player and automatic climate control. In the final production version the equipment is said to vary from the early prototype.

Three years after its first appearance on Automóvil Panamericano, Mastretta announced the MXT will debut at the 2010 Paris Motor Show on September 30, 2010.

The MXT is produced beginning 2011 at Mastretta's first car factory with an annual production of 150 units. Around 70% (105 cars) will be exported to Europe and the United States, and 45 will remain for national sales (only in Mexico).

Prices will be around 55,000 to 60,000 USD and the equivalent in Euros and UK Pounds. There is no information about the price for Mexican consumers, but it's estimated to reach 600,000 to 700,000 Mexican pesos. Sales will begin in early 2011 in the United Kingdom and México, with other international destinations to follow.[5] The Mastretta Orange is said to be the official color, but many others will be available.