For other colleges with the same name, see Dominican College

In 2006, the university partnered with Alonzo King's LINES Ballet School to offer a joint educational BFA program. Only two universities in United States offer a Dance BFA program; the other is Fordham University.

Dominican is a member of the National Collegiate Athletic Association (NCAA) Division II and competes in 12 sports in this Division. Dominican is accredited by the Western Association of Schools and Colleges (WASC).

The final debate of the California gubernatorial election, 2010 between Meg Whitman and Jerry Brown took place at Dominican University on October, 13, 2010. 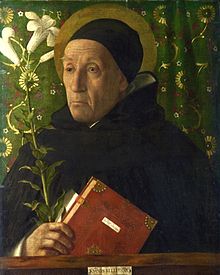 Dominican University of California takes its name from St. Dominic de Guzman, who was born in Caleruega, Spain, in roughly 1172. The history of the university traces back to 1850 when Joseph Alemany was appointed Bishop of Monterey. On his way to his new post in California, he stopped in Paris and asked a few Dominican sisters to join him to teach the children of the Forty-niners. Mary Goemaere (1809-1891) volunteered to accompany the new bishop and to begin a school in his new diocese. Within three years, nine women (three American, one Mexican, and five Spanish) joined Sister Mary to form the Congregation of the Most Holy Name.

In 1889, Mother Louis O'Donnell (1887-1929) moved the central administration of the Congregation of the Most Holy Name to San Rafael.

In 1890 the Congregation of the Most Holy Name, under the auspices of Mother O’Donnell, filed Articles of Incorporation with the Secretary of State of California. With the encouragement of faculty of the University of California in Berkeley, a junior college was opened in 1915, and in 1917 a four-year college, Dominican College, was formed.

The mission of the Dominican University of California is to educate and prepare students to be ethical leaders and socially responsible global citizens who incorporate the Dominican values of study, reflection, community, and service into their lives. Guided by its Catholic heritage, the university is committed to diversity, sustainability, and the integration of the liberal arts, the sciences, and professional programs.

Dominican University of California’s motto is Veritas Fax Ardens, “Truth, a flaming torch.” The school mascot is a penguin. The Torch is the name of the Alumni magazine. The Habit is the name of the student newspaper. The Tuxedo is the on-campus literary magazine.

Each year the university celebrates the Shield Day, which is a ceremony whereby Dominican seniors officially greet the incoming freshmen by giving them a gift of an illustrated shield that features an inspirational motto.

On Spirit Day, Dominican invites its students, parents, alumni, faculty and staff to explore the campus, attend classes and meet with faculty, staff and administrators.

The Senior Thesis is an academic tradition. Like a master’s thesis, the senior thesis gives students an opportunity to, as undergraduates, explore in depth issues that interest them.

Service Learning is an integral part of Dominican education. In 2009, Dominican’s students completed over 8,000 service-learning hours. As a result, Dominican was named to the President’s Higher Education Community Service Honor Roll.[2] That same year, Dominican’s student-athletes won the PacWest’s “Community Engagement Award” for their community service initiatives. Dominican also earned the PacWest Academic Achievement Award in 2009-2010 and 2010-11 for achieving the highest overall student-athlete GPA of all schools in the Pacific West Conference. [3]

2007: Dominican opens a 35,000-square-foot (3,300 m2) Science Center, enabling the University to expand its biomedical research program and to continue to train students for careers as doctors and research scientists. 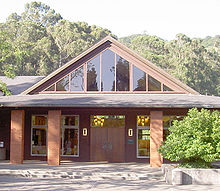 Dominican’s campus, located in San Rafael, California, United States, sits on 86 acres (35 ha)[1] nestled in a small community near the base of Mount Tamalpais. The campus buildings feature a wide variety of architectural styles, each building being built in the style of its time.

There are four residence halls located on Dominican’s campus: Pennafort (all freshman); Fanjeax (mostly freshman); Meadowlands (mix); and Edgehill Village (upper classmen). Over 50 percent of the undergraduate students at Dominican live in on-campus student housing. Over 90 percent of the freshman live on-campus their first year. In their room, each student receives a twin-size bed, desk, dresser, chair, walk-in closet and wireless Comcast Internet and television. Freshmen are automatically guaranteed a residency on campus. Sophomores, juniors and seniors receive on-campus housing through lottery. All residence halls are co-ed. The bathrooms are not co-ed. Two rooms (male and male; or female and female) share a bathroom. Each hall has a “resident advisor” who oversees the students living in that hall. Dominican is not considered a “dry campus” when it comes to alcohol; however, Pennafort and Fanjeax are dry dorms by default because no one over the age of 21 lives in them. No smoking is allowed in the residence halls because Dominican is a smoke-free campus.

Built in 1921 and dedicated in 1922, Angelico Hall was built to serve as a music conservatory. It was refurbished in 1989. Angelico Hall's seating capacity, including its balcony, is 850. The following historic events took place in Angelico Hall:

Built in 2006–2007, the Science Center is one of the newest additions to the Dominican campus. This 35,000-foot building was a $21 million project that was funded in part by NASA. Dominican is involved in breast cancer, stem-cell, and marine biology research.

The Dominican Heritage and Alumni House opened in 2011. This Queen Anne Victorian was constructed in 1887 by the shipping magnate William Babcock. The building was first named Edgehill Mansion and was renamed in 2011. The Dominican Heritage and Alumni House is a home to Catholic and interfaith worship, Student Life, Campus Ministry, student government and organizations, the International Center, Alumni Relations, Career and Internship Services, and the Osher Lifelong Learning Institute.

Associated Students of Dominican University (ASDU) is the primary group that helps students plan and provide campus activities, distribute activity funds, initiate changes in policy, and represent the students to the University’s administration. This group of elected student representatives serves both as the student activities’ association and the student government board. The members of the ASDU Senate are composed of representatives from all four classes of day-program students. Students who perceive a need for a new and different organization on campus are invited to discuss their ideas with ASDU, the Dean or Assistant Dean of Students, or the Director of Housing.

Dominican focuses on interdisciplinary studies. In the sciences, the University involves undergraduates in sophisticated research projects, and encourages students to present at national academic conferences and publish in peer-reviewed journals. In the humanities, students can combine dance and musical performance with the study of philosophy, literature, world cultures, and religion. Dominican also offers undergraduate and graduate programs in business, education, counseling psychology, occupational therapy and nursing.

Dominican University has a student population of about 2,270 students, of which some 1,300 are undergraduate students. In 2010, Dominican accepted 52% of the students who applied for the Fall semester. The average SAT critical reading and math scores were a 510, totaling an average SAT score of a 1020 (Dominican does not consider SAT writing scores). Thirty-nine percent of Dominican students are of AHANA heritage (African American, Hispanic, Asian American, or Native American). In 2011, the ethnicity breakdown was Hispanic 15%, Asian American 16%, African American 5%, White 42%, and Other 22%.

The first Dominican nursing program was approved by the California Board of Nursing and accredited by the Western Association of Schools and Colleges in 1983. The National League for Nursing subsequently accredited the program in 1987. In 2004 both the master's and baccalaureate programs received accreditation from the Commission on Collegiate Nursing Education.

The program seeks to integrate business and environmentalism and to educate a new generation of leaders who are able to bridge the gap between environmentally sound, socially responsible and financially successful business practices.

The Green MBA places a high degree of emphasis on individual transformation as the starting point to transforming business and the world. Classes are scheduled on the weekends to accommodate students with careers and busy schedules, and students traditionally graduate in 2 or 3 years. There are approximately 100 students currently enrolled in the program. The Green MBA is accredited with the Western Association of Schools and Colleges

The program pioneered at New College of California in 2001 and Dominican University acquired the Green MBA in 2007. In 2008 the Green MBA launched a 6 month executive certificate in sustainable business management: Green your MBA.

Honors students can expand their work in a course by doing a special projects, explore a topic through Honors Seminars, or pursue independent study and research under the guidance of a faculty adviser. Honors students are required to take certain advanced courses and extra units throughout the four year program.

Each year a Dominican student is selected to participate in the Panetta Institute Congressional Internship Program. This student leader spends the fall semester working in Washington, D.C.

In 2006, the U.S. Commercial Service of the U.S. Department of Commerce relocated its North Bay U.S. Export Assistance Center to Dominican.

International opportunities are offered through Dominican's Office of Internationalization and Global Education (OIGE). The OIGE provides students with opportunities to live and learn in foreign countries while earning academic credit, though the University's Study Abroad Program. The ELS Language Centers program located on the Dominican campus is a language center for international students to come and learn the language in America.

Dominican's School of Business and Leadership also offers an MBA in Strategic Leadership.

The Dominican Penguins are the athletic teams for the Dominican University of California. The Penguins compete in the NCAA Division II, Pacific West Conference in most sports, except Men's lacrosse, which competes in the Western Intercollegiate Lacrosse Association (WILA).

Dominican was originally a member of the NAIA and beginning in 2008 began a transition to NCAA Division II.[4] The university joined the Pacific West Conference in 2009.[3] The move put the Penguins in the same conference as fellow Bay area schools Notre Dame de Namur University and the Academy of Art University. The university became a full member of NCAA Division II in 2011.[5][6] In 2006, the men’s basketball team won the California Pacific Conference (NAIA) for the fourth straight season, a first in Cal Pac history. The men’s soccer team captured the Cal Pac Conference in 2005 after an undefeated season. The Women's Volleyball team won the title in 2007. Dominican's athletic center, Conlan, was opened in 2000.