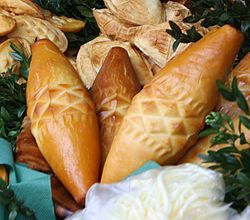 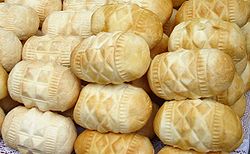 Gołka - Polish cheese similar to oscypek, but made with milk from cattle

Oscypek, Oszczypek (Polish; plural: oscypki) is a smoked cheese made of salted sheep milk exclusively in the Tatra Mountains region of Poland (as well as anywhere the Gorals — natives of the Tatra mountains — emigrate, e.g., Lithuania, Ukraine and Hungary). Oscypek is a protected trade name under the EU's Protected Designation of Origin geographical indication.

A similar cheese is made in Slovakia under the name Oštiepok. The cheeses differ in the ratio of their ingredients, the cheesemaking process and the characteristics of the final product.[1] 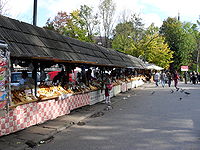 Oscypek is made using salted sheep's milk, with the addition of cow's milk strictly regulated by the protected recipe. Unpasteurized salted sheep's milk is first turned into cottage cheese, which is then repeatedly rinsed with boiling water and squeezed. After this, the mass is pressed into wooden, spindle-shaped forms in decorative shapes. The forms are then placed in a brine-filled barrel for a night or two, after which they are placed close to the roof in a special wooden hut and cured in hot smoke for up to 14 days.[2]

The first mention of cheese production in the Tatra Mountains dates back to the 15th century, in a document from the village of Ochotnica in 1416. The first recorded recipe for oscypek was issued in 1748 in the Żywiec area.[2]

Before Poland voted to join the European Union, some Polish Eurosceptics warned that oscypek could be banned in the EU due to its use of unpasteurized milk and its production by unlicensed farmers. No action has been taken yet against the sale or production of the cheese.

There is also a smaller form called redykolka, known as the 'younger sister' of oscypek.