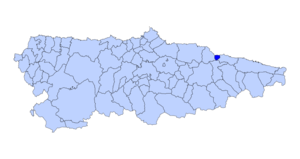 Caravia is a municipality in the of the , . It is bordered on the north by the (known in Spain as "Mar Cantábrico" or Cantabrian Sea), on the south by , on the east by and on the west by .

Caravia is the third smallest municipality of Asturias. The population is centered mainly in Prado (Prau in ), the municipal capital, Duesos and Duyos. It is 68 km from , the capital of the principality.

There are mountain summits in the southern parts of Caravia, with Fito (631 m) being the highest. In the north there are three main beaches: Beciella, Arenal de Morís and Espasa. The beaches are separated by great cliffs along the coast. The rest of the municipality has little variation in . Its main watercourse is the Romeros river.

Together with the municipalities of , , and , Caravia is part of the geographic area known as Sierra del Sueve.

The first humans in Caravia were during the period, during the time when humans began to use stone tools. From this time period, there are ruins known as "Les Vaques" and "La Pongueta", located near Duyos, where Paleolithic humans lived near a small river and rocky escarpment.

There is a large -like (or burial mound) near Beciella beach, by the mouth of the Romeros river. Nearby, there is also the Necrópolis de la Tuerba, formed by three tumuluses located in the coastal plain.

The first excavations made in the Picu el Castru, were carried out , , by . He found a prehistoric fortification in his first dig, located two kilometers from the sea at an altitude of 380 m. This fortification had a perimeter of 225 m.

From this castro-style fortification, both the sea and the mountains can be seen, making it an ideal location to oversee Caravia and Colunga. It is accessed by a meandering ramp which leads to the interior containing the foundations of rectangular huts, 4 by 3 m, separated one from another by 90 cm.

According to Aurelio de Llano in his book "The Book of Caravia", the fortification contained tools, domestic utensils, and feminine jewelry. There were fibulae made of and , pendants and necklaces. One notable bronze fibula was decorated with an embossed pony. Aurelio de Llano determined that the fortification dates back to the ( to ). All the pieces coming from the excavation are currently in the .

One important exists from the , known as the Stele of Duesos (La Estela de Duesos). It was discovered on the exterior of the Church of Duesos, carved in a block. The existence of these steles, frequently embedded in Christian churches during their construction, is due to the conversion to of places where religions were formerly practiced.

The stele is a fragment without epigraph and it is decorated on all four sides. The decoration is divided in registers, and the head is undecorated. A recurring theme of the carving is curved radii similar to a . It is similar to Roman steles, but maintains traditional indigenous features. Among the materials taken from the fortification, there are examples of decorations similar to the stele.

:"This page is based on a translation of the corresponding page on the .